Home Premier League A dive too far from Wilfried Zaha?

A dive too far from Wilfried Zaha? 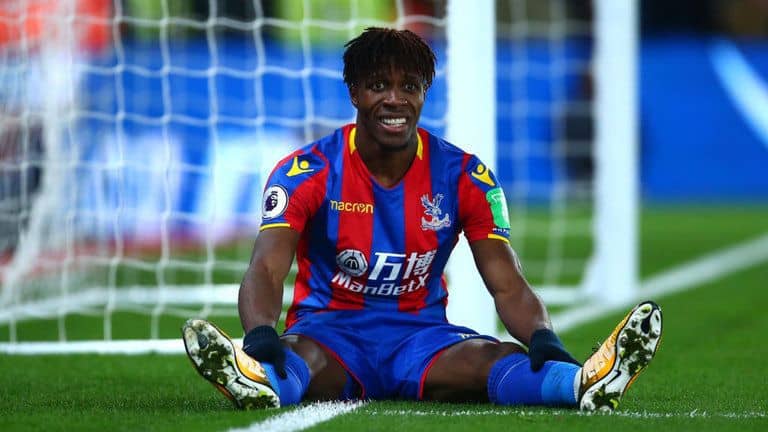 Crystal Palace’s Wilfried Zaha has once again hit the headlines, but this time for all the wrong reasons. The Ivory Coast international was the centre of a controversial diving incident reported in the recent face-off between the Eagles and Manchester City.

Zaha’s noticeable act of simulation won his side a penalty late on against the current Premier League leaders, and had Luka Milivojevic’s spot-kick not been saved by Ederson towards the tail-end of the fixture, Crystal Palace would have been on course to a great victory over Pep Guardiola’s side.

Zaha is quality player, the diving is absolutely disgraceful though. Yet again he has deceived a referee, good to see that penalty saved.

Don’t like seeing players do what Zaha did in the box, or what Puncheon did to KDB…but Palace do deserve praise for the battle at the back. That spirit will keep them up. Sending @gabrieljesus33 all the best for a speedy recovery ??

Zaha remains an outwardly effective player in every sense of the word. He is able to grab certain fixtures by the scruff of the neck for Crystal Palace, saving his side from the brink of turmoil with his aggressive wing-play and direct style of movement.

Fans of the Premier League need only cast their minds back towards the beginning of the season, a spell in which Crystal Palace seemingly couldn’t buy a win for neither love nor money. Zaha was of course absent throughout the opening stages of the current campaign. He would later ignite Palace’s season with an all-important return to first team action.

Wilfired Zaha doing really well this season. Would have been interesting, had he stayed at Man Utd, to see exactly how Mourinho would have ruined his spirit.

Quite easy to make the point that now, in 2017, Manchester United would be improved with both Zaha and Fosu-Mensah.

Yet many enraged onlookers have seen fit to criticise Wilfried Zaha in recent weeks, especially on the back of his latest antics last time out against Manchester City. Whilst the 25-year-old is remarkably effective with the ball at his feet, the current Crystal Palace man displays equally prevalent showcases of diving and simulation with every passing season.

In no uncertain terms, Zaha goes to ground too easily – sometimes without the aid of any form of contact from opposing players. He is admittedly cut down time and time again outside the penalty box with neither shame nor remorse from those who seek to stop him, yet his rather noticeable prowess for manipulation has arguably gone too far.

Dive. But who's surprised? #Zaha

Zaha doesn’t help himself with the way he celebrates “winning” penalties…. pic.twitter.com/uZHTBGUTIW

It’s not to say that Wilfried Zaha is the only professional footballer competing among the English top-flight who seeks to commit such regular misdeeds, just that his ability to win dubious penalties clearly remains at the forefront of Palace’s attacking policy.

The situation isn’t improved by the constant inconsistency regularly displayed by Premier League officials, nor is it aided by the ongoing approval and subtle promotion of diving from within the ex-players and punditry community. Diving seems part and parcel of the modern game nowadays, and for that we can all breathe a sigh of some variety.

Feels like the media is desperate to get Zaha banned. Groundless sniping, week after week, to build up the pressure. Baseless and cowardly agenda #cpfc

Zaha dives for a penalty yet again, confirmed on TV by pundits and Graham Poll, irrelevant that they missed it. Will he get retrospectively punishment? Nah, of course not #divingcheat

Like it or not, Zaha subsequently goes down as an increasingly effective customer – especially when taking advantage of the various shortcomings and loopholes of modern day officiating. Nobody wants to see players being clattered around the field left, right and centre, but who knows what the long term effects of diving will have on future generations to come.

Crystal Palace won a valuable point for their efforts in the end, and whilst Roy Hodgson’s side could have effectively picked up all three had it not been for a desperately late penalty-miss from his team, the result was a rather hard-earned one from an Eagles point of view.