League Two accumulator tips for Saturday’s fixtures including the reasons for each prediction and the best bookmakers to use on the bet.

We’ve picked out three bets which will hopefully boost our betting balance at the beginning of 2020. 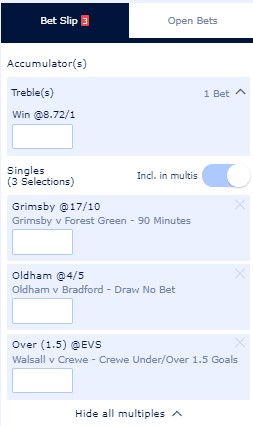 Ian Holloway has fully immersed himself in life at Blundell Park and the former Blackpool boss has got his side firing once again. They may have been defeated last weekend, however they created plenty of chances in the first half. They were able to bounce back with a 3-1 victory here in midweek and they will bring plenty of confidence into this tie. They’ve lost just two of their last eight League Two matches and one of those defeats came against high-flying Exeter. Forest Green’s promotion push is threatened to come off the rails with the Nailsworth club having lost each of their last three matches. They conceded four times to Carlisle in midweek and their solid defence has now shipped eight times in the space of a fortnight. Grimsby could take advantage of their struggles at the back.

The Latics picked up a morale boosting win at home to Mansfield in midweek and they will fancy their chances of making it back-to-back home wins on Saturday afternoon. Dino Maamria’s side have benefitted from the form of Jonny Smith, who has scored six times since arriving from Bristol City. They are unbeaten in their last five games and despite the uncertainty off the field, they continue to be tough to beat on the pitch. Bradford picked up yet another draw in midweek and Gary Bowyer is struggling to get a tune out of his side. The pressure is on and the sale of both Eoin Doyle and James Vaughan means that the Bantams must sign a new striker by the end of Friday. They’ve won just three times away from home all season with their last victory coming in mid-October.

Walsall vs Crewe – Over 1.5 Crewe Goals

Although Crewe’s away form is sketchy, they should be able to take advantage of a Walsall side who seem to be lacking confidence once again. The Saddlers appeared to be upwardly mobile in early-December, but Darrell Clarke’s side have become sloppy and they are particularly prone to errors at the back. They’ve now conceded eight times in their last three matches and were particularly poor against Morecambe in midweek. Crewe didn’t need to get out of second gear to ease past Leyton Orient on Tuesday and they’ve now netted 2+ goals in each of their last two matches. The Railwaymen do struggle to keep clean sheets on their travels, but they’ve scored in all but two of their away trips and they should be able to grab a couple here.

If you open a new William Hill account and bet £10 on our League Two betting tips this weekend, you will get 2 x £15 free bets to spend. This is in addition to any winnings you get if your bet is a winner.