When Jadon Sancho opened the scoring for Borussia Dortmund during the first half of a Bundesliga game against Bayer Leverkusen back in April 2018, he was netting his initial first-team goal for the German outfit following a near €9m move from Manchester City that previous Summer.

Sancho helped Borussia to claim a 4-0 victory that day but such has been his development as a player both in Germany and as a full international that a high-profile transfer to England within the next few months seems increasingly likely.

The Camberwell-born winger began his early football career with Watford before moving to Manchester City where he never featured for the first team. With limited opportunities available at the Etihad Stadium and then being named player of the tournament at the 2017 European Under-17 Championship, Borussia Dortmund moved quickly to secure the services of Sancho.

With Ousmane Dembele Barcelona-bound, Sancho was allocated the number 7 shirt vacated by the Frenchman and his football career has subsequently blossomed. At a club where young players are regularly afforded the chance to progress, the English midfielder/winger soon became a favourite among the fans amassed on the ‘Yellow Wall’ at Signal-Iduna Park.

A regular starter for Borussia, Sancho has netted 26 league goals during the past two seasons in a team renowned for their attacking prowess. His form in Germany caught the attention of England manager Gareth Southgate who has subsequently awarded him eleven full international caps to date.

Yet it comes as no surprise that Sancho has attracted the interest of Premier League teams with Manchester United having reportedly agreed personal terms with the exciting forward. A transfer fee is still to be agreed with Borussia Dortmund if reports are correct, but odds for Jadon Sacho to move to Manchester United are currently 8/11 with Betfair.

There is also the case of Chelsea who signed Christian Pulisic from the same German club for €64m in January last year. The American provided the assist for Sancho when he scored that goal against Bayer Leverkusen and they formed a decent understanding at Borussia. It is also worth noting that the England international was a supporter of the Blues from an early age.

Odds of Sancho signing for Chelsea are 7/2 with Betfair but for both Premier League clubs, the eventual negotiated transfer fee will be the key feature. It is quite possible that the London club could match the terms offered by United, and then become involved in a bidding war with their rivals.

Will Jadon Sancho start for England at Euro 2021?

How much will Jadon Sancho cost?

At just 20-years-old Sancho is by no means the finished product. A substantial fee will be demanded by Borussia Dortmund, and they may also insistent on extras for development and performance on top of the initial amount.

At a time when finances are being impacted by the COVID-19 pandemic, there are few clubs capable of affording Sancho, but he proved his ambition by seeking a move away from Manchester City to seek first-team football. It now seems as though a move to the Premier League may be his desired wish but much hard bargaining awaits in the coming weeks. 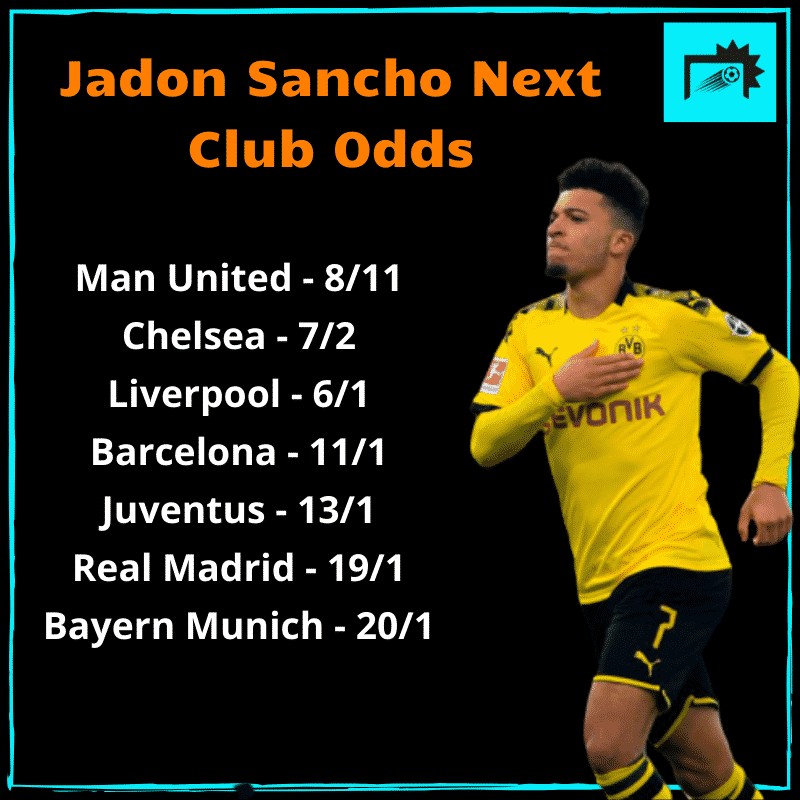 Bet on Sancho’s next club with Betfair’s £100 in free bets offer.