League Two accumulator tips for the New Year’s Day fixtures including the reasons for each prediction and the best bookmakers to use on the bet. We’ve picked out three bets which will hopefully boost our betting balance at the beginning of 2020.

We use William Hill for our League Two best betting tips because of their bet £10 get £30 sign-up bonus, so if you bet on this football tip on New Year’s Day, you’ll get 3 free £10 bets. 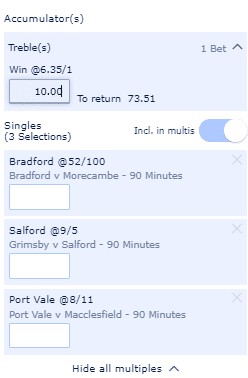 There have been one or two grumbles around West Yorkshire about Gary Bowyer’s style of football, however Bradford are flying high and are looking likely to return to League One at the first time of asking. The Bantams have a great home record, winning eight of their twelve matches here and they picked up another three points at the weekend against Mansfield. They have been excellent at the back and Morecambe could struggle to find a way through. The hosts have conceded just once in five matches and another clean sheet is highly likely. The Shrimps were a little lacklustre against Cambridge at the weekend and have now lost three in four. Away from home, they’ve lost eight of 12 and are unlikely to start 2020 with a victory.

Grimsby have started scoring again, yet they are slipping perilously close to the relegation zone. They are yet to appoint a permanent successor to Michael Jolley and despite just a single side slipping into the National League, they can’t afford too many more slip-ups. They are facing one of the division’s in-form sides on Wednesday and could struggle to keep Salford at bay. On the plus side, the Mariners aren’t conceding a ton of goals and haven’t shipped more than a single goal in any of their last four outings. The visitors have scored seven times in two matches and were imperious against Oldham on Sunday. Graham Alexander’s men have lost just one of their last four away games and that was a last-gasp loss to high-flying Colchester. They should be able to head back to the North West with all three points.

There’s plenty of seasonal goodwill around Vale Park with the hosts in decent form at the moment. They out-thought a decent Swindon side at the weekend and also kept a clean sheet. They became the first side in eleven matches to keep Eoin Doyle off the score-sheet and they shouldn’t have too many problems with low-scoring Macc. The away side have had lots of problems off the field, yet they always battle admirably. They haven’t won since October 19th and have scored just three goals in six matches. They draw an awful lot of games, but one goal could easily be enough the hosts in this tie.

If you open a new William Hill account and bet £10 on our League Two betting tips, you will get 2 x £15 free bets to spend. This is in addition to any winnings you get if your bet is a winner. Join William Hill using the steps below:

Read More: We’ve also got the best bets from League One this weekend