Liverpool Unveil New Away Kit for the 2019/20 Season 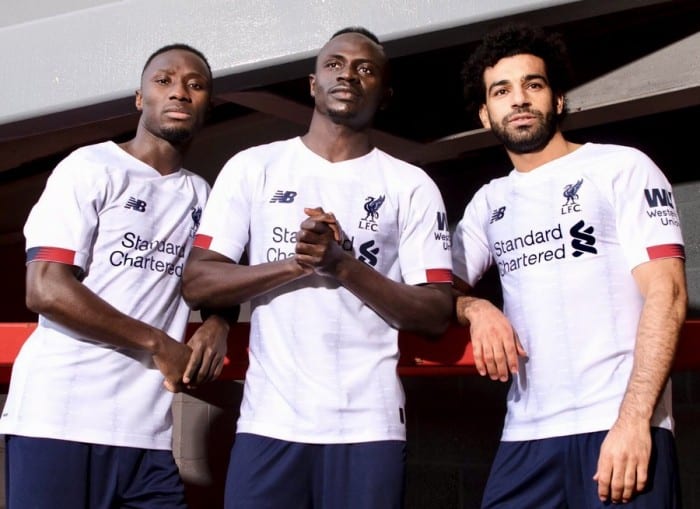 Liverpool have today released the first pictures of their new white away kit for the 2019/20 season. The New Balance kit was the subject of much controversy when images were leaked online before the official launch on Friday 7th June.

The official Liverpool Football Club website explained that the design “takes inspiration from iconic street signs around Anfield, while its collar shape and construction pays homage to the strip worn by the club’s 1977 European Cup-winning side under Bob Paisley”.

Just like the new Liverpool home kit, the jersey includes the signature of legendary Liverpool manager Bob Paisley’s signature on the inside neck, and there is a tag inside dedicated to Paisley in year where he would have been celebrating his 100th birthday.

When all you can hear is the travelling Kop.

The new Liverpool away kit is completed with navy shorts and white socks. The goalkeeper jersey, to be worn by Alisson, is green.

Following Liverpool’s 6th Champions League win in Madrid last week, Liverpool fans can also add patches to their new away shirt. They can add patches on both arms of the 2019 trophy, six times winners, and respect patches.

Ready for more special away days.

The price of a standard Men’s Liverpool away shirt is £59.99.

The prices are the same for the goalkeeper kit.

Fans reaction to the new Liverpool away kit

New Liverpool away kit makes it look like they play in the Sky Bet, and I respect that big time pic.twitter.com/lodBxDQuQ1

Yeh, would be a nice England kit! Just red white and blue, navy shorts, just doesn’t scream Liverpool to me. You’ve got some great traditional away colours, this seems like an odd choice.