The Scottish League Cup gets underway this weekend and we’ve picked out four selections from our match previews to make up an accumulator tip at over 9/1.

We’ve mixed up the selections in this game and have a 1×2 prediction, team to win to nil and two both teams to score predictions, all from the 3pm matches in the Scottish League Cup.

See our Saturday accumulator tips below:

ROSS COUNTY TO WIN TO NIL

The first selection is a to win to nil bet and it’s Ross County. They are now two leagues above this weekend’s opponents and ended last season very strongly. They’ve kept that form going in pre-season, and scored 11 in one of their two wins. If they can keep a clean sheet, this bet should be an easy winner and the perfect start to our bet.

Read our Ross County vs Montrose predictions for this game.

Queen of the South vs Motherwell – July 13th.

Queen of the South have only played one friendly match ahead of this game – something that will not be ideal. Motherwell have won their previous three friendly matches to nil so they are way further ahead in their preparations and could get an easy victory here – the odds are generous enough to just back the away side to win on the 1×2 market in this one.

Read our other Queen of the South vs Motherwell prediction for this fixture.

Airdrie have scored in both their pre-season matches and looking back at the end of last season, both teams scored in their last three away fixtures. Partick had a remarkable run of BTTS matches towards the end of the Championship in 2018/19, with their last ten home fixtures seeing both teams find the net.

Read our Partick Thistle vs Airdrie predictions for more bets on the match.

Falkirk are the weaker side on paper here but they do have home advantage to help them. Even though they were relegated last season they did score in eight of their last nine home matches so that will give their fans hope of at least getting a goal in this game. Livingstone should win this one in truth, but they should definitely get on the scoresheet at the very least.

Read our Falkirk vs Livingstone predictions for the fixture including a correct score tip. 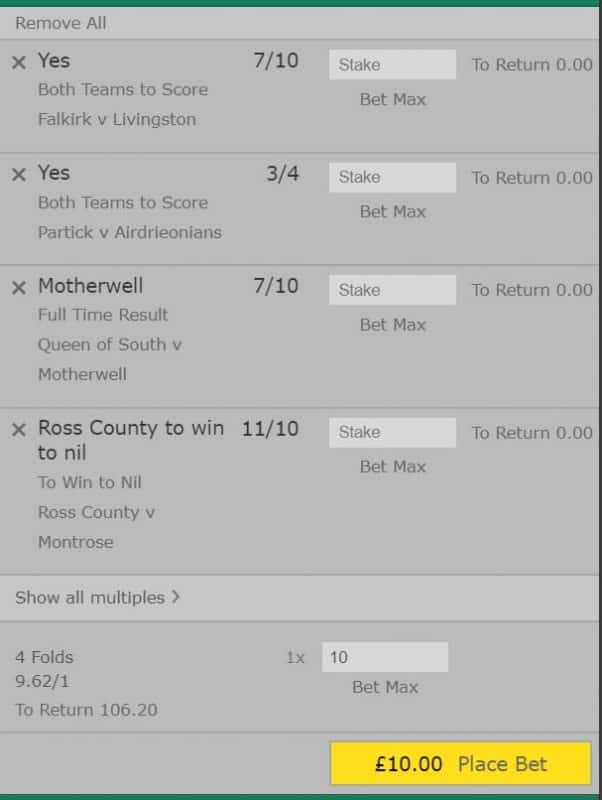 Money back specials including a refund if matches end 0-0

Cash out your bets