Serie A accumulator tips for this Sunday afternoon’s fixtures including the reasons for each prediction and the best bookmakers to use on the bet. We’ve picked out three bets which will hopefully boost our betting balance.

We use William Hill for our Serie A best betting tips and if you join them today, you’ll get an exclusive £100 bet bundle added to your account. 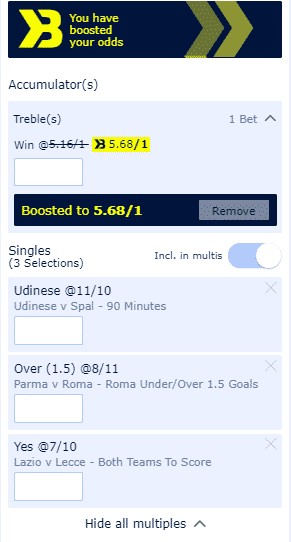 It’s been a terrible season for Udinese, but they have been showing signs of life in recent weeks. A 1-0 over Torino in October and a narrow victory over Bologna at the end of September were much-needed results whilst last weekend’s 3-1 success at Genoa was one of the more eyecatching outcomes of the day. They fell behind in that game before mounting a second-half comeback and it was a very spirited display. They’ve kept three clean sheets in six at home and are facing a side who just can’t seem to score on the road. SPAL come off the back of a narrow loss at home to Sampdoria and now sit bottom of the Serie A table. They’ve scored just two goals in six matches and could struggle to break Udinese down here. They lost 3-2 here last season and whilst we aren’t expecting a thriller, it should go the way of the home side for the second season running.

Roma have suddenly started to find form and they should be able to collect another three points this weekend. Paulo Fonseca’s men put four past Udinese despite going down to ten men and they’ve also beaten Napoli and AC Milan in recent weeks. They’ve suffered just a single defeat this season (midweek loss to Atalanta) and have conceded just three goals since late September. Edin Dzeko still plays an integral part in this side although Aleksandar Kolarov has also seemingly stepped up this campaign as well and has netted four times already. They are unbeaten on the road, and should be able to find a way past a Parma defence that is struggling to keep clean sheets. Sassuolo are the only side that have failed to score against the hosts this season and they could find Roma’s forward line too hot to handle. Roma have won 2-0 and 2-1 in their last two visits to this season and a similar result is likely on Sunday.

Lazio vs Lecce – Both Teams to Score? Yes

Lazio have won three in a row coming into this fixture and Le Aquile will be feeling confident coming into this tie. They’ve scored eight goals in those matches and have netted 17 times in their last six Serie A outings. They are looking unstoppable in the final third and they should find a way past Lecce’s back-line. Ciro Immobile is once again the key man and he’s looking to add to his 13 goals here. Lecce are likely to struggle at the back, but they won’t be shy in coming forward. They’ve netted in nearly every one of their away matches and haven’t failed to find the net on their travels since late-August. They scored twice at Torino, three times at SPAL and also found the net against AC Milan and Atalanta. They certainly should create chances and BTTS looks like a decent option in this one.

If you open a new William Hill account and bet £10 on our Serie A betting tips this week, you will get £30 in free bets to use across the rest of the week. This is in addition to any winnings you get if your bet is a winner. Join William Hill using the steps below: