The first of our Championship betting tips comes from the New York Stadium with Rotherham taking on out-of-form Bolton. The Trotters are in dire form and have failed to bet in four of their last five matches. After winning their first two games on the road, they have picked up just two points from a possible twelve on their travels. The Millers have lost 6/6 on the road but they’re far more effective in South Yorkshire and this looks a winnable game for them. Paul Warne’s side are unbeaten in five of their last six matches here and have kept four clean sheets in the process. Derby, Millwall, Ipswich and Bristol City have all failed to find the back of the net at this stadium and that is a huge worry for a barren Bolton side. Rotherham may edge this but the 0-0 is a huge danger for Miller’s backers so take Both Teams to Score? No at 21/20 with Bet Victor.

The second of our betting tips for Saturday afternoon comes from West London. The Bees are under new manager Thomas Frank today but he should be able to continue where Dean Smith left off. Brentford’s home form has been excellent this season and they have netted 14 times at Griffin Park so far. Crucially, they have conceded just five times and that has helped them become the third best home side in the division. They played well at Elland Road prior to the International Break and Neal Maupay is a constant threat. It remains to be seen whether Frank adopts a similar style of play but the Brentford way is unlikely to be compromised here. Bristol City are going through a poor spell. After winning four in a row at the beginning of September, they have since failed to pick up three points in their subsequent five matches and they’ve netted just four times in that period which is very un-Bristol City like. Away from home, they’ve picked up just a single point from the last nine and they may be up against it here. Brentford are priced at 3/4 with Betway and should be backed.

Sign Up to Betway and Get a Free Sports Bet up to £30. T&Cs apply. New customers only.

Wigan have one of the best home records in the league but they face a tough test against free-scoring West Brom. Darren Moore’s side have been the entertainers of the league so far and on their travels, they’ve netted 11 times in their opening six away trips and have also conceded on ten occasions. They travel to the North West for this clash against a decent Latics side. Paul Cook’s side are yet to be defeated at the DW but the goals have dried up over the past few weeks and it’s no surprise that this drought has coincided with Nick Powell’s injury. Sheffield Wednesday and Nottingham Forest are the only two sides that they have hosted who occupy a top ten position and they conceded against both. West Brom fans are pleased with the progress of their side although their lack of clean sheets is perhaps a concern. Wigan may not have scored since September 21st but they should play their part in this game and it should be a decent spectacle. When it comes to Over 2.5 Goals, West Brom are prolific with eight of their twelve games featuring three or more goals whilst Wigan have seen this land in 50% of their home games. It’s definitely worth a look at 7/10 with Boylesports. Over 2.5 Goals is the third of our Championship predictions for Saturday.

This is a potentially trappy affair between two sides who have suddenly found form in the Championship. Instead of attempting to predict the outcome of this game, we’re heading to the anytime goalscorer market instead. Lukas Jutkiewicz is in red hot form at the moment and has scored six times this season. He is Birmingham’s top goalscorer by some distance and with his side unbeaten since August, he is clearly playing with plenty of confidence. After a slow start to the season, he’s netted five goals in just under 270 minutes of football and should be able to punish a Stoke defence which is still a little questionable. There are signs of improvements from the Potters and two clean sheets on the bounce will certainly help lift spirits in the Potteries but it’s hard to write Jutkiewicz off in his current form. He’s 3/1 with Bet365 to net anytime in this fixture and is the fourth Championship betting tip of the afternoon.

When browsing the statistics this week, I surprised to see Reading high on the Over 2.5 Goals list. The Royals are current joint-third with 8/12 matches featuring three of more goals this season. Only Preston have conceded more goals than the Berkshire outfit this season and it’s easy to see where the issues are. Reading did have a period of improvement but their two performances prior to the International Break suggest that Paul Clement still hasn’t found a solution or his perfect XI. They’ve kept just one clean sheet all season and conceded four second half goals to West Brom during their last outing. They have lost 5/6 at the Majeski although they have managed to find the net in four of those games. Millwall appear to be heading in the right direction. Neil Harris’ side were badly struggling for form during the early part of September but they’ve started to pick up points and that’s a good sign. After scoring just three times in 585 minutes of football, they have since netted six in their last three matches and are definitely heading up the table. They should test this Reading defence but the Royals may have a goal or two in them as well. Over 2.5 Goals is generously priced at 11/10 with Ladbrokes and should be backed.

Open a new Ladbrokes account to bet on the Championship this weekend and unlock their £20 bet bundle. Simply register using one of our links and bet £5 or more on any football bet today, win or lose you get FOUR free £5 bets automatically added to your new account. 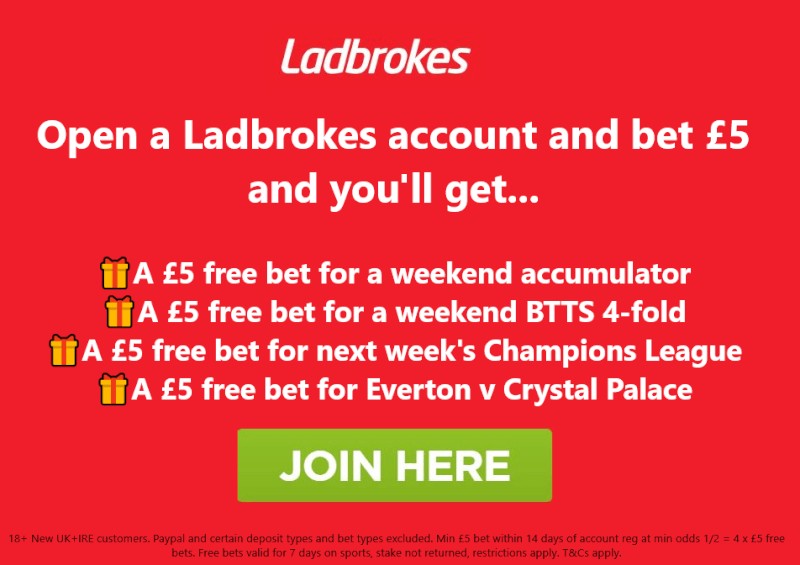