Derby vs Sheffield United predictions and Championship betting tips for Saturday night’s fixture. Kick-off is 5:30pm on the 20th of October and our tipster has selected three recommended bets.

Our Saturday evening Championship predictions come from Pride Park as eighth place Derby host early pacesetters Sheffield United. Frank Lampard’s managerial career has been largely positive so far and despite a few small bumps in the road, his young squad are holding their own in the Championship and they look play-off contenders in-the-making. The Rams’ lack of firepower could be a concern however with just two goals in their last three games. They’ve also netted more than a single goal in a game on just three occasions. Barring a 4-1 humbling at the hands of Leeds, they remain unbeaten on their own patch. However, it’s just one win in six and this is a very tough assignment. Sheffield United continue to make progress and Chris Wilder has enjoyed an excellent start to the season. The former Oxford boss has guided his side to the top of the table and they look a hugely effective unit. Ollie Norwood has been a superb addition whilst John Egan has also settled in well. David McGoldrick appears to be a man reborn and he is keeping Leon Clarke out of the side. They come into this game off the back of a four-match winning streak and have netted nine times in that run. Since drawing consecutive blanks against Bristol City and Birmingham, they’ve kicked on and they look unstoppable at the moment. They’ve won at Ewood Park, The Den, Loftus Road and the Macron this season and none of those are easy places to visit. Both sides are in decent form coming into this tie but since scoring three first half goals against Brentford, they’ve have struggled to find the back of the net. Sheffield United are in free-scoring form and could just edge this teatime clash. Sheffield United Draw No Bet is available at 49/50 with 888Sport. It is the first of our Derby vs Sheffield United predictions for Saturday evening.

Whilst Derby punished Brentford in the first half for their sloppiness here at Pride Park, Sheffield United won’t be such an easy prospect. The Blades are a tough nut to crack and will put up plenty of resistance. There’s a fairly even split in Derby matches with 54% of their goals arriving after half-time. However, Sheffield United have seen 60% of their goals arrive in the second half and their each of their last five goals have been scored following the break. Their superb fitness levels allow them to keep probing and asking questions and this game could come to life during the later stages. There won’t be much between these two teams and it could be a game in which the momentum of the second half dictates the outcome. Highest Scoring Half – Second Half is available at 11/10 with Paddy Power and looks a sensible play based on the stats. It is the second of our Derby vs Sheffield United predictions.

Our final Championship prediction comes from the anytime goalscorer market and it’s hard to argue with the in-form David McGoldrick being priced up as the favourite in this market. The striker has netted five times this campaign with three of those goals coming away from home. He has netted four times in the last four matches and arrives here full of confidence. It wouldn’t be the first time that he’s scored against Derby and he is likely to be given a start here, barring any last minute fitness issues. David McGoldrick is available at 2/1 to score anytime with Betway and is the third of our Derby vs Sheffield United predictions for Saturday.

Derby have been understandably priced up as the favourites for this clash and the Rams will be included in many weekend accumulators. Frank Lampard’s side have lost just once at home all season and keep things tight in front of their own fans. Very rarely are the league leaders priced up at 9/5 on the road but the Blades can be backed at a decent price here. They are looking for fifth consecutive victory and the majority of their players have enjoyed some time off during the International Break. They should come back refreshed and will be looking to continue their upward trajectory. The pair look quite evenly matched and the draw could be tempting at 11/5.

Both sides have been defending well so far this season and Under 2.5 Goals could be a popular selection and is available at 10/11. Over 2.5 Goals is also available at the same price. Both teams have found the net in their two previous meetings and Both Teams to Score? Yes can be backed at 4/6 in this clash.

Our football tipster is keen on David McGoldrick to find the net in this clash and the former Ipswich hitman is the favourite in the first goalscorer market. He’s 5/1 to open the scoring and is closely following by team-mate Billy Sharp at 13/2. Martyn Waghorn is likely to be on penalty duty and is priced at 6/1 with Jack Marriott at the same price. The striker is off the mark and keen to make an impression in the second tier and could be one to keep on side.

Highest Scoring Half – Second Half – 11/10 with Paddy Power

Read More: Domestic football is back! Check out all of this weekend’s Premier League Predictions and our 5 best bets from the top flight

As you will see, we are using William Hill for all our Championship betting tips this weekend, so you need an account with them to follow our bets. Open a new William Hill account and you’ll get a sign-up bonus of THREE free £10 bets added to your account. The example below shows just how you could use the offer. 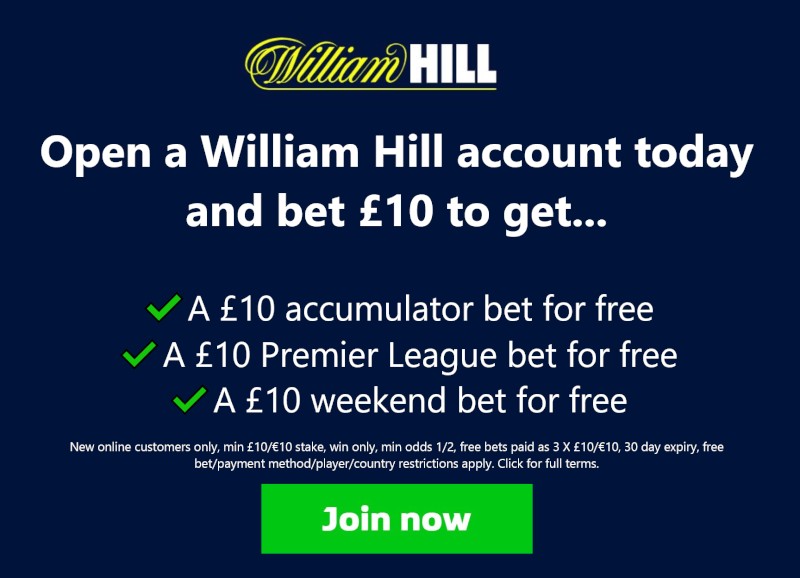