Aston Villa vs Derby County predictions and betting tips for Monday’s Championship play-off final at Wembley Stadium. Which of these two sides will book their ticket back to the Premier League?

Aston Villa put seven past Derby without reply this season.

Derby haven’t kept a clean sheet in any of the last four matches.

The Championship play-off final is upon us! One of these two sides will have the chance to join Norwich and Sheffield United in the top flight, and secure £180m for the coffers.

Both sides have been loitering in the second tier for longer than they would have liked, and each of these two teams have tasted defeat at this stage previously. Derby’s loss to QPR was completely unjust, whilst Villa’s tame effort against Fulham twelve months ago was extremely forgettable.

Across the course of the campaign, both sides have been hugely entertaining to watch, and Dean Smith and Frank Lampard have both allowed their players to compete with relative freedom and expression. Derby did brilliantly against Leeds, although their first leg performance was hugely concerning. The arrival of Jack Marriott certainly helped their cause, and he is likely to be given a start in West London.

Whilst Marriott brings plenty of energy to the field, Mason Mount and Harry Wilson add the much-needed creativity, and it’ll be interesting to see how the youngsters cope on the bigger stage in front of a packed-out stadium.

Derby’s concerns are at the back. Fikayo Tomori has had an excellent season, whilst Richard Keogh does bring bags of experience to the table, but they do occasionally get caught out. Away from Pride Park, Derby kept just three clean sheets all season, and that could pave the way for a lively Villa side to cut through them.

Meanwhile, Villa weren’t able to break down a stubborn West Brom side, who became even more resolute once they’d been reduced to ten men. WBA proved staunch opposition, but Villa kept on pushing. They shouldn’t come up against such a firm resistance this time around, and are more likely to be drawn into a fairly open game – something they clearly feel more comfortable with.

Dean Smith’s men appear to have a much better attacking balance with Connor Hourihane in the side, and the Irishman should be given a start here. Tammy Abraham may need surgery this summer before heading back to Chelsea, but he’ll be fit enough to play in this one, and will be his usual busy, lively self.

And then there’s Jack Grealish… although he does spend most of his time getting fouled, he is one of the best players to watch in the Championship, and is highly likely to seek a move away from Villa Park if he can’t help guide his side to promotion. That determination may just carry them through.

It doesn’t always correspond, but Villa have certainly had Derby’s number whenever they’ve met this season, and I think they will enjoy this match-up far more than their semi-final tie with WBA. They should relish playing on the bigger pitch, and they should be able to make up for last season’s below-far display under a far less pragmatic coach.

It’s always difficult to know what to expect with these games from goals perspective. Even the two most creative teams in the league can sometimes freeze on this big stage, and with so much at stake, it is understandable that some managers instruct their side to be cautious – particularly during the early stages.

Both of these two teams score goals, but they’ve both been on the wrong end of 1-0 defeats here before, and neither will want to commit too early.

One of my favourite markets – 2-3 goals exactly looks like the best option here. It would have landed when they met at Pride Park earlier in the campaign, and in six of Villa’s last eight games.

As tempted as I am to tip up Jack Grealish (again), he might be marked very tightly in this one, and it could be best to go down a more obvious route.

Tammy Abraham has been urged to “make himself a hero” at Wembley by former Villa man Garry Thompson, and the 21-year old will want to sign off in style. It’s highly unlikely that he will be in the West Midlands next season, so it would be the perfect goodbye to those Villa fans who have been singing his name throughout the campaign.

Abraham is also likely to be on penalty-taking duty (assuming Hourihane doesn’t step up), which adds to the appeal, as this game could be decided by an incredibly fine margin.

Tammy Abraham may be the favourite in this market, but he should be backed on Bank Holiday Monday for our anytime goalscorer tip on Villa vs Derbty. 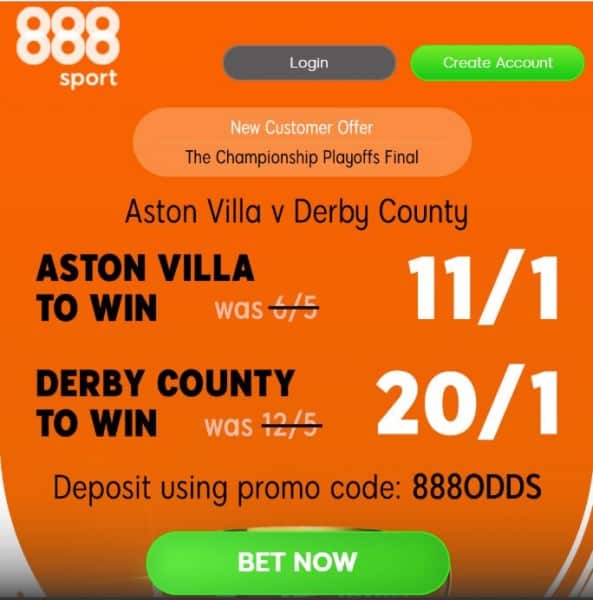