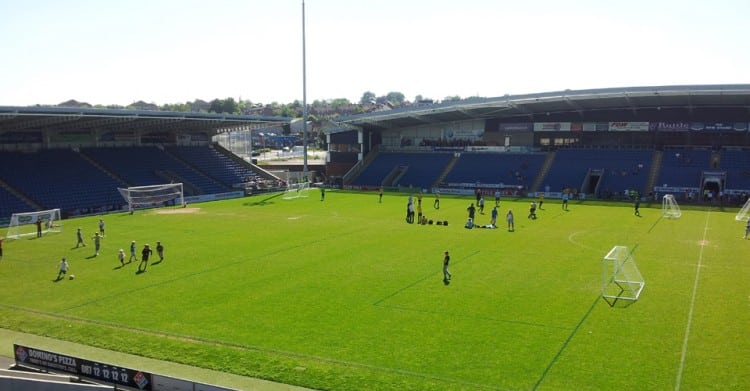 Chesterfield vs Sutton United predictions and betting tips for this Saturday’s National League fixture on March 23rd with an anytime goalscorer tip and goals prediction included.

Chesterfield’s slow start to the season has all-but scuppered their hopes of making the play-offs, but the Spirites have begun to show some signs of life, and fans will be feeling a little more positive about next year. They can dent the play-offs hopes of Sutton United at the Proact on Saturday lunchtime in front of the BT Sport cameras. The visitors haven’t been in great form, but got back to winning ways last weekend. See our Chesterfield vs Sutton United predictions below.

Despite approaching the end of the season, Chesterfield still have to pick up enough points to ensure they are mathematically safe from relegation. John Sheridan’s side sit a comfortable eight points above fourth-bottom Havant and Waterlooville, but the Mancunian will not let his players rest on their laurels, as there is still a job to do. Although it’s very tight in mid-table, Chesterfield could still end the season in the top-half, and that will be the aim for the management team. There is also the issue of 15 out-of-contract players at the end of the current campaign, so a number of them are also playing for their futures. The Spirites had a productive period in which they went seven unbeaten in December-February, and they have taken seven points from the last twelve, but they’ve still only won four times in front of their own fans this season – an astonishingly poor record. Sutton have endured a mixed campaign, and are currently still in contention to make the end-of-season play-offs. Under the new format, they would make the first round, but their inconsistencies are worrying. Yes, they’ve won seven times on the road this season, but they’ve been defeated in four of their last five games away from Gander Green Lane, and it’s something they need to address. However, they did get back to winning ways last week against Gateshead. Both sides are conceding goals at the moment, and neither of the two teams are in imperious form. I understand the price on Chesterfield to win this game, but the value looks to be on the draw. It’s available at 12/5 and it’s the first of our National League predictions for Saturday lunchtime.

Sutton have failed to score in their last three away games, but they had netted in each of their six previous road trips. After hitting four past Gateshead, they will be feeling confident in the final third once again. Chesterfield conceded three times to play-off chasing Eastleigh during their last home match, and that makes it nine goals shipped in five National League matches. However, John Sheridan’s side also pose a threat going forward, and this could be a relatively entertaining 90 minutes. It ended 1-1 when they met earlier in the campaign, and a similar result can be expected here. Both Teams to Score? is odds-on, but it looks a decent pick. It’s the second of our Chesterfield vs Sutton United betting tips for this weekend’s clash.

Although I’m tempted by goalscoring defender Will Evans, who does tend to score his goals in runs, it’s probably a better idea to stick with the prolific Scott Boden. The striker is likely to be on penalty duty once again, and he’s always very efficient at this level. He started the season with Gateshead, and was excellent for the Heed, but his recent run of form for his new club is mightily impressive. He’s now netted in each of the Spirites last four games, scoring twice against Braintree, and he’s notched six in total this campaign. He could be the best way of approaching this one and he’s the third of our Chesterfield vs Sutton United predictions.

Chesterfield have won just four home games all season, but their general form has been decent enough, and I can understand why many punters will be keen to back them at 21/20. The draw is available at 12/5, whilst a rare away win for Sutton United can be backed at around 5/2.

Although this looks like an entertaining game on paper, but the bookies are being a bit cautious with the goals market. Over 2.5 Goals is priced at 43/40 and looks a tempting proposition. Under 2.5 Goals is short enough at 8/11.

Scott Boden, our anytime goalscorer pick is available at 7/4 to score again in this one. The experienced Marc Antoine-Fortune is next in the betting at 15/8. Brett Williams and Tom Denton can both be backed at 5/2, whilst the aforementioned Will Evans is available at 13/2.