Solihull Moors vs Blackpool predictions and betting tips for the FA Cup fixture on Friday 30th November. Can Solihull cause a major upset in the second round?

Blackpool have lost just twice away from home all season.

Solihull Moors have been defeated just once since September 8th.

Get three free £10 bets when you open a new William Hill account.

Get a free £10 bet to use on the FA Cup when you sign up for Sport Pesa account.

Our FA Cup predictions begin with a trip to the Midlands as Solihull Moors welcome Blackpool to the ATG Stadium and it’s a game which is being shown live on BBC2. Tim Flowers has done an excellent job at the club so far and he says his side will be giving it their best shot. The hosts come off the back of a goalless draw with Salford, a match in which they displayed excellent defensive discipline and organisation once again. It’s three consecutive 0-0 draw at home for Moors and they haven’t conceded a goal for a month (October 27th) in the fifth tier. They have scored eight in six games however so they do possess a threat in the final third with both Danny Wright and Adi Yussuf displaying plenty of prowess. Solihull Moors will not be easy to beat here and the BBC sense the possibility of an upset. Blackpool have been excellent this season and they have been defeated just four times so far this campaign. They do come off the back of a disappointing midweek loss against Doncaster, a match in which the Seasiders were noticeably off the pace and second best throughout. That was just their second away loss of the campaign and only Portsmouth have conceded fewer goals on the road than Terry McPhillips’ side this season. Blackpool had a good run in the EFL Cup and have only lost back-to-back games once this season and they shouldn’t be written off here. Both sides have been excellent in recent months and with defences on top, this could be a very even game. Draw looks the best bet in this one and it’s 5/2 with Sport Pesa for the game to end all-square. It is the first of our Solihull Moors vs Blackpool prediction for Friday night.

As previously mentioned, both sides have been well organised and neither back-line is easy to breach. The hosts have conceded just 13 goals this season with only Leyton Orient, Wrexham and Fylde possessing a better record in the National League. They haven’t shipped a goal since the end of October and although this is a stiffer test for them, I think they can hold firm for large periods of the match. Ryan Boot has been excellent in goal for the Midlanders and he will be hoping to keep another shutout here. Blackpool did concede twice in midweek but they’ve kept the most clean sheets in League One with ten shutouts from 19 games. Under 2.5 Goals looks a decent option and can be backed at 4/5 with Betway. Although far from ideal for a televised game, it is the second of our Solihull Moors vs Blackpool predictions.

Both sides are likely to line up with their strongest XI for this game and Terry McPhillips has been managing his players across a busy schedule in recent weeks. Pool visited Exeter, Southend, Gillingham and Doncaster within the space of a month and have crammed a couple of home games in along the way. They’ve played eight times within a month if you include the EFL Trophy but he is likely to play a first choice side here. That is likely to include Armand Gnandouillet, a player who has been in good goal-scoring form and can be backed at 15/8 with Bet365 to score anytime in this game. Prior to Tuesday, the big striker has netted three in three for the Seasiders. He is the third of our FA Cup predictions on Friday.

This game falls perfectly on the Under/Over 2.5 Goal line but with recent defensive display impressing for both sides, Under 2.5 Goals looks the better option at 4/5. For those who fancy goals, Over 2.5 Goals is priced at 19/20 whilst an ambitious looking Over 3.5 Goals is a 9/4. Both Teams to Score? Yes has rarely landed for either of these sides this season but the FA Cup can often throw form out of the window and it’s 4/5 for each team to hit the back of the net.

As the graphic suggests, Solihull Moors are incredibly difficult to beat. They’ve only been beaten five times but four of those losses arrived in August and early September. A tempting 2/1 is available for Tim Flowers’ side on the Draw No Bet market whilst it’s 17/20 for them on the +1 handicap here. They have only beaten non-league sides in this competition so far and this is significantly tougher for them.

Blackpool are also difficult to beat and have suffered just four defeats all season. They have drawn seven times however and it’s 5/2 for the game to end all-square once again. The League One side can expect a tough battle here but they will be well-backed at 19/20 to progress through to the next round.

Bet £10 on any team to win their Premier League match this weekend and get a £10 free bet, plus, anytime they win a match between 1st December and 3rd January, you get a free £5 bet.

CLAIM NOW – up to £50 in FREE BETS over the Christmas period from Betfred. 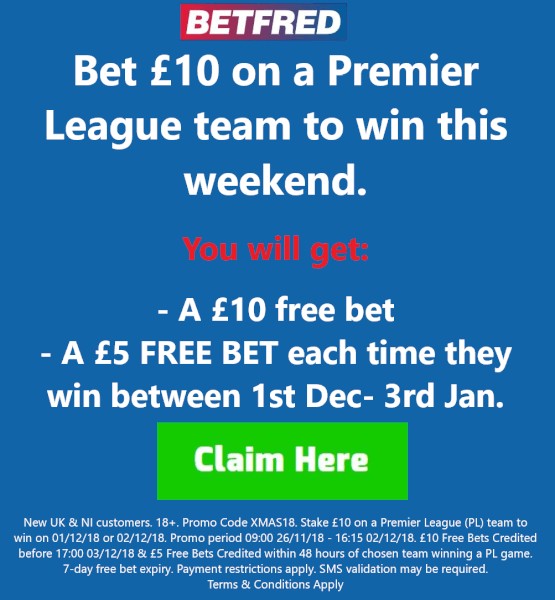