Charlton vs Portsmouth Predictions and Betting Tips: League One Preview

Charlton vs Portsmouth predictions and betting tips for this Saturday’s League One clash on March 9th with an anytime goalscorer tip and goals prediction included.

Fourth plays fifth in this televised League One tie on Saturday night, and it should be a very entertaining 90 minutes. Pompey have overcome their mid-season blip, and looked unstoppable against struggling Bradford last weekend. Kenny Jackett’s men have won over 50% of their matches on the road this campaign and they won’t be fazed by a trip to the Valley. Charlton are struggling to turn draws into wins at the moment, but Lee Bowyer’s men should be able to remain competitive throughout this encounter. See our Charlton vs Portsmouth predictions below.

Despite losing Karlan Grant to Huddersfield at the end of the January transfer window, and their results have slightly dipped since his departure. His exit coincided with Lyle Taylor’s suspension, which nulified their threat in the final third, but the former AFC Wimbledon man has returned to the side in recent weeks. Charlton may not be quite as prolific at the moment, but they are incredibly difficult to beat. The Addicks have only been beaten twice at the Valley this season, and in-form Fleetwood are the only team to snatch all three points from Lee Bowyer’s side since December 29th. January was a poor month for Pompey with the club suffering three defeats on the spin, dropping out of the automatic promotion places as a result, but they’ve steadied the ship in recent weeks. They are unbeaten since losing to runaway leaders Luton on January 29th, however they’ve drawn five of their last six games. There are still problems with the balance of the side, although Ben Close’s recent performances have certainly helped address the departure of Ben Thompson two months ago. Neither side will want to surrender any ground here, and this could be a closely contested game between two surefire play-off candidates. The draw is the first of our League One predictions for Saturday night.

Defending has not been a speciality for either of these sides in recent weeks. Although their goalless draw with Barnsley was impressive, that was Pompey’s first clean sheet in 13 attempts, and they weren’t able to keep Bradford off the scoresheet last weekend. Away from home, Portsmouth have only kept three clean sheets, and average 1.24 goals conceded per game. That statistics suggests that they’ll struggle to keep Charlton off the score-sheet this evening with the Addicks having only failed to score three times in front of their own fans. True, their goals have dried up of late, but they have hit the target in three of their last four matches, and outshot Blackpool 11-5 during their recent goalless draw with the Seasiders. Both Teams to Score? Yes is the second of our Charlton vs Portsmouth betting tips.

The aforementioned Ben Close has really impressed since coming into the side, and considering his recent scoring record, he is a big price to find the net in this game. The 22-year old had only netted once prior to February 9th, but he’s hit a purple patch in recent weeks, and at 14/1, he’s worth a look in this market. He’s now scored four in his last five League One encounters, including a double against Bradford. His position allows him to get forward, and at such a young age, he still has the legs to keep up with the rapid Jamal Lowe. Ben Close is the third of our League One predictions for Saturday evening.

Charlton have been priced up as the favourites for this tie, and Lee Bowyer’s side can be backed at 6/4 to take an important three points from this game. Portsmouth are available at 2/1 to pick up their tenth away win of the campaign. They are much better on the road. The draw is priced up at 12/5 and is the first of our predictions for this evening.

There might not be much between the pair, and the bookies aren’t expecting many goals in this encounter. Over 2.5 Goals is available at 23/20 whilst Under 2.5 Goals can be backed at 4/6.

Lyle Taylor leads the way in the goalscorer market, and he is priced at 9/2 to score the opener in this League One tie. Portsmouth have a number of possible goalscorers with Oliver Hawkins in decent form. He is 13/2 to net the first goal of the game.

Open a new MoPlay account and bet £10 on any football bet today > win or lose you get TWO free £15 bets added to your account. 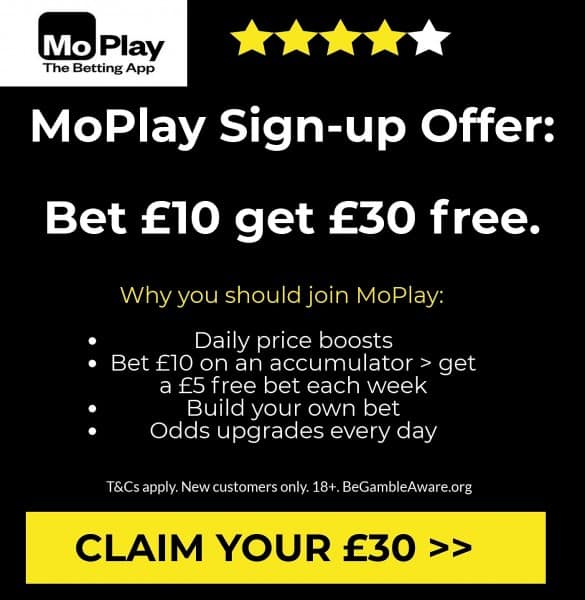