League One accumulator tips for the Boxing Day fixtures including the reasons for each prediction and the best bookmakers to use on the bet. We’ve picked out three bets which will hopefully boost our betting balance over the festive period.

We use William Hill for our League One best betting tips because of their bet £10 get £30 sign-up bonus, so if you bet on this football tip on Boxing Day, you’ll get 3 free £10 bets. 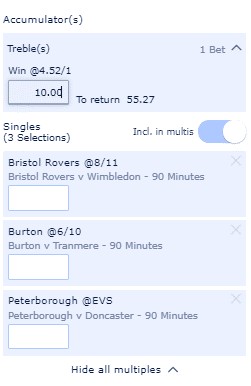 Despite the loss of Graham Coughlan, Bristol Rovers still managed to get a positive result at the weekend as they held Peterborough to a goalless draw. They are unbeaten since October 22nd and have won four of their last five League One matches. Despite drawing a blank against Posh, they’ve still netted twelve times in their last five matches and they should have too much for poor travellers AFC Wimbledon. The West London outfit were defeated yet again at the weekend, losing 1-0 at those Prenton Park. They’ve failed to score in three of their last four away trips and may find it tough to break through once again.

The Brewers finally broke their home hoodoo with a convincing 3-1 win over Rochdale at the weekend. Nigel Clough’s side fell behind, but had enough about them to battle back and take a valuable three points. They have been much better on the road, yet have lacked firepower on their own patch. This should theoretically be one of their easiest home encounters of the season as they take on a Tranmere side who struggle to score goals. They’ve lost seven of their last ten matches away from home and have kept just a single clean sheet outside of Merseyside. Their only two victories have come against an out-of-form MK Dons side and a smash-n-grab victory at St.Andrews.

Peterborough were left frustrated at the weekend as they drew a rare blank against Bristol Rovers. They’re back at home on Boxing Day and will be expected to collect three points against an inconsistent Doncaster side. Posh haven’t been at their free-scoring best of late, but they’ve kept three clean sheets in four games and have won seven of their first ten home games. Darren Moore’s Doncaster have struggled to score goals this season and are without a victory since October 22nd. They’ve lost three of their last four away from home and were recently defeated at AFC Wimbledon.

If you open a new William Hill account and bet £10 on our League One betting tips this week, you will get 2 x £15 free bets to spend.

This is in addition to any winnings you get if your bet is a winner. Join William Hill using the steps below:

Read More: We’ve also got the best bets from League One this weekend.