League One accumulator tips for the New Year’s Day fixtures including the reasons for each prediction and the best bookmakers to use on the bet. We’ve picked out three bets which will hopefully boost our betting balance at the beginning of 2020.

We use William Hill for our League One best betting tips because of their bet £10 get £30 sign-up bonus, so if you bet on this football tip on New Year’s Day, you’ll get 3 free £10 bets. 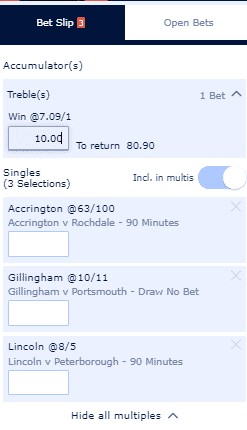 Despite a number of injuries to key players, Accrington’s home form has been nothing short of sensational lately. They picked up another victory at the Crown Ground on Sunday easing past Burton and keeping a clean sheet in the process. They’ve won five times at home this season and four of those have arrived since late October. In-form Gillingham are the only side to have beaten John Coleman’s side here recently and inconsistent Rochdale could struggle on Wednesday. The hosts have scored 13 times in their last three matches here and will to punish a Dale defence which has kept just one clean sheet in nine outings. Although they beat Rotherham, the visitors have lost eight of nine games and aren’t expected to get anything here.

As mentioned above, the Gills are one of the most in-form sides in the EFL and unusually for a Steve Evans side, they are going about their business reasonably quietly. They’re unbeaten in five matches coming into this contest and have won four in a row at the Priestfield. They are making it difficult for sides to play against them and are also scoring goals. Brad Hanlan works hard, but probably doesn’t get the goals he deserves whilst Connor Ogilvie is finally getting the plaudits. Pompey are formidable at Fratton Park, although it’s been a different story away from home. After being battered by Accy, they also lost at improving MK Dons on Sunday and have won just two of ten matches on the road.

Although Posh are flying high, they are currently enduring a wobble and Darren Ferguson will be determined to sort things out. Peterborough were never particularly effective away from home despite their goalscoring heroics earlier in the campaign. They’ve won just three of 12 on the road and have been defeated on five occasions. They’ve netted just a single goal in four League One encounters and have drawn a blank in each of their last three. Lincoln will look to take advantage of their woes and at Sincil Bank, they will fancy their chances. The Imps hit five past Ipswich on Sunday and the crowd was right behind them. Tyler Walker is finally getting going whilst Jake Hesketh had his best game since joining the club. The hosts should be able keep their decent run going here.

How to get the William Hill Free Bets

If you open a new William Hill account and bet £10 on our League One betting tips for New Year’s Day, you will get 2 x £15 free bets to spend. This is in addition to any winnings you get if your bet is a winner. Join William Hill using the steps below: