Manchester United vs Manchester City predictions, betting tips and match preview for the Premier League Manchester Derby on Wednesday 24th April 2019. Can United put a massive dent on City’s title hopes or will City make the most of this game in hand on Liverpool?

Man United vs Man City Prediction: What will the score be?

A lot of people think this is the title decider, if Manchester City can get three points at Old Trafford this week, they will be two points ahead of Liverpool at the top of the table, with just three fixtures remaining. They’ve won their last 10 Premier League matches now but did suffer a Champions League knockout against Tottenham last week. That blow means they can focus all their attention on the title race and following this game, City have the following fixtures remaining: Burnley (a), Leicester (h) and Brighton (a).

United suffered a humiliating 4-0 defeat to Everton at Goodison Park on Sunday and that result left Ole Gunner Solskjaer apologising to the travelling fans after the full-time whistle. There will certainly be a reaction to that defeat here but it is hard to see how they can stop Manchester City in their tracks here.

City have won their last four away league matches now and only conceded once in that time, however we’re predicting Man United will try and fight fire with fire here so we could see a lot of goals. Given that, the first of our Man United vs Man City predictions for this game is going to be Man City to win and both teams to score. At the time of writing, the best odds are 9/5 with Ladbrokes.

From a Manchester United point of view, Marcus Rashford looks the most likely goalscorer for them but it is Paul Pogba who is their top scorer with 13 in the league. Seven of these have been from the penalty spot but he’d be a decent option for an anytime goalscorer tip. There are rumours Pogba could be on his way out of Old Trafford, with Real Madrid a possible destination and some United fans would be happy to see the back of the World Cup winner.

However, our selection for our next Man United vs Man City betting tip is going to be Aguero to open the scoring. He’s scored the first goal on eight occasions in the Premier League so far this season and it would be no surprise to see Manchester City’s lethal finisher get another goal here. The best odds for Aguero to score first are 10/3 at Bet Victor.

Although Man United would love nothing more than to derail City’s title challenge, there are some fans at Old Trafford who would rather see their local rivals win the league title as opposed to Liverpool. There is no doubt Solskjaer will demand a reaction after their shocking performance against Everton but this Man City side looked really fired up against Spurs on Saturday and we’re expecting a similar reaction in this one.

The correct score prediction for this week’s Manchester derby is a 3-1 Man City victory and the odds are best at bet365.

Read More: Get all the latest Premier League betting tips for this week’s action. 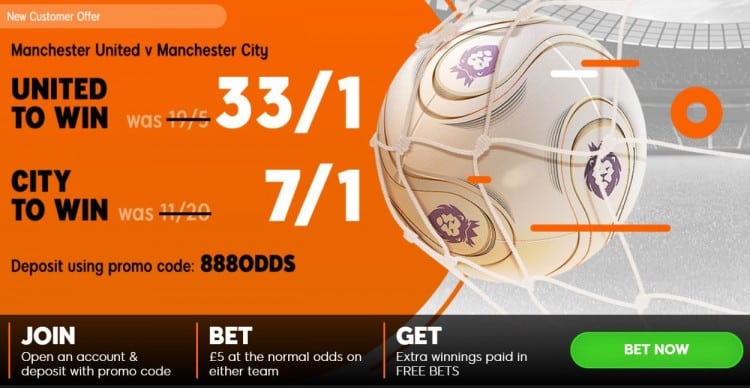 The pass ⚡️
The finish ❄️@WayneRooney got us going against City in 2006! #MUFC pic.twitter.com/2FisOAOmAP

What a moment for @PhilFoden!

The Race for the Premier League Top 4 – Who will miss out today?