How has Maurizio Sarri improved Chelsea? 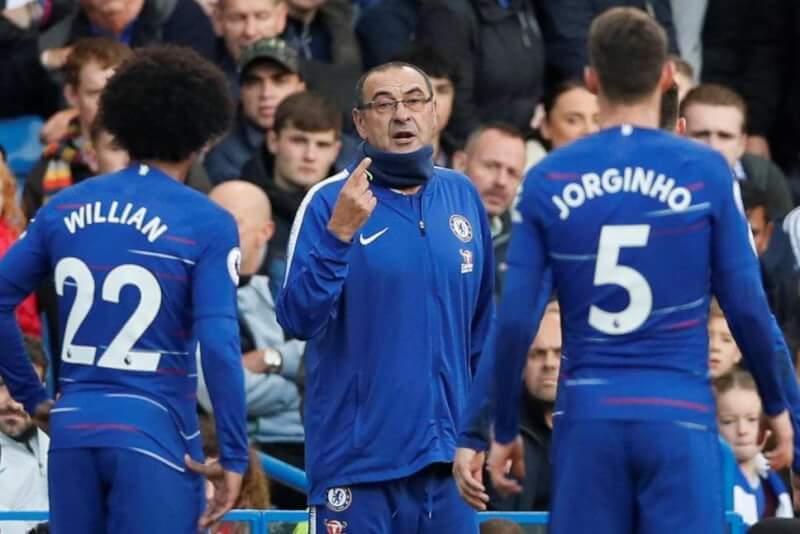 Although Manchester City may have broken almost every Premier League record last season, Maurizio Sarri’s impressive start to life at Stamford Bridge has been rewarded with a spot in the league’s record books.

Coming off the back of last weekend’s 0-0 draw with Everton, the 59-year-old is the first manager to go his debut 12 games without tasting defeat.

The Blues are now the only team in England’s top-tier yet to be beaten domestically or in Europe.

Looking to book a return to Champions League football and also keep the pressure on City and Liverpool, how has last year’s Serie A Coach of the Year improved the atmosphere in West London?

With Sarri offering a new attacking philosophy, a huge part of Chelsea’s immediate success has been down to the arrival of some new faces at Stamford Bridge.

One man who epitomizes his bosses’ style of play is one of Sarri’s former Napoli disciples, Jorginho.

Spending two years under the Italian and playing a huge part in Gli Azzurri’s revival last season, the 26-year-old has quickly endeared himself to fans in SW6.

Almost playing a quarterback role in front of Chelsea’s back four, Jorginho is the man who dictates the Blues’ tempo.

Selected in all of Sarri’s starting XI’s both domestically and in Europe, no player in the Premier League has completed more passes or had more touches of the ball.

In fact, during Chelsea’s 0-0 draw with West Ham back in September, the 12-cap Italy international made an incredible 180 passes at the London Stadium. No player in Premier League history has attempted more over 90 minutes.

Vital in and out of possession. pic.twitter.com/YS52LsWipK

Another new arrival that appears to be improving by the week is the recently crowned world’s most expensive goalkeeper, Kepa Arrizabalaga.

While his performances at Athletic Bilbao saw him receive plenty of plaudits, his £71million price tag raised plenty of eyebrows in England’s top-tier.

However, despite the likes of David de Gea publically struggling during his early tenure at Manchester United, Chelsea’s new #1 is settling in well.

Kepa has shown he’s got an excellent range of passing and has all the attributes of a successful modern-day goalkeeper.

Often the one who starts the Blues’ attack from the back, during Sunday’s 0-0 draw the 24-year-old completed 27 passes with an accuracy of 100%.

Yet to lose a match in Royal Blue, although it is early days, Kepa could prove to be the ideal replacement for Thibaut Courtois.

While Jorginho has done a colossal job of operating in front of Sarri’s back four, many have been shocked by the transformation that Chelsea’s defence have made.

In the final days of Antonio Conte’s reign, the Blues’ defence came under heavy scrutiny and their problems were epitomized by their 3-0 defeat away at Newcastle in Conte’s final game in charge.

However, conceding eight goals this season, they hold the second best defensive record in the Premier League and the partnership of David Luiz and Antonio Rüdiger is blossoming by the week.

With Sarri demanding his central defensive duo to play out from the back, Luiz and Rudiger appear to be relishing their new bosses’ approach.

Both defenders sit third and fourth in the Premier League’s passing charts.

Remarkably, Chelsea have completed more passes than Manchester City this season and their defensive partnership have been crucial to how easily Sarri’s side dominate possession.

With Sarri deciding to swap to his trademark 4-3-3, many around Stamford Bridge were concerned about how Marcus Alonso would fair as an out and out left-back.

Despite the worries that his defensive work rate would leave Chelsea exploited, the 27-year-old has made an extremely impressive transition.

Still with the freedom to join the attack and play a part in their quick counter-attacking style, Alonso has picked up three assists so far.

With his performances helping him retain his position in Spain’s national side, the Chelsea left-back is also now the top points-scoring player in Fantasy Football.

Unsurprisingly, Eden Hazard has once again cemented his spot as Chelsea’s talisman.

Despite heavy speculation surrounding a move to Real Madrid over the summer, the World Cup Bronze medalist has pledged his allegiance to the Blues, even if it is just temporary.

While the 27-year-old might still have one eye on a move to the Bernabeu, Hazard has entered the international break in scintillating form.

Already bagging seven Premier League goals and sat just one behind Sergio Aguero in the goalscoring charts, the Belgian winger is firmly on course to set a new personal best season.

Chelsea’s talisman has not recorded a 20+ goal campaign since his final year with Lille in 2012.

Eden Hazard in the Premier League this season:

Given more freedom to operate and play between the lines, no player across Europe has completed more dribbles this year.

Even more impressive, only five-time Ballon d’Or winner Cristiano Ronaldo has been directly involved in more goals than Hazard across Europe’s Top 5 leagues.

If Chelsea and Sarri are serious about mounting a genuine title push this season, there is no doubt in who will be the man to spearhead their charge.