Home Premier League Jack Grealish or James Maddison – Who is better and should they go to Euro 2020?

Two of the most talked-about talents in English football, right now, are Leicester’s James Maddison and Aston Villa’s Jack Grealish.

Or perhaps it’s just that they’re both really bloody good.

Today, we’ve had a look at the two, compared them, and tried to break down who’s really better.

Grealish vs Maddison – The Stats

Grealish has a decent return of seven goals and five assists in 21 Premier League games, this campaign. For someone playing in a struggling team, too, it’s even better.

Maddison, meanwhile, has six goals and three assists in 22 games this campaign. That’s good, but the numbers could be higher based on how well Leicester are doing this season.

Maddison and Grealish are so good man.

In terms of chances created, however, Grealish is all over Maddison.

The Villa man is on 46, whilst Maddison is down on 25 created from open play. That’s pretty crazy.

Open play chances created in the Premier League this season:

Another important stat is age. Whilst Grealish is 24, Maddison is a year younger at 23. There’s not much difference, there – but both are at a good age to go on and have great careers. 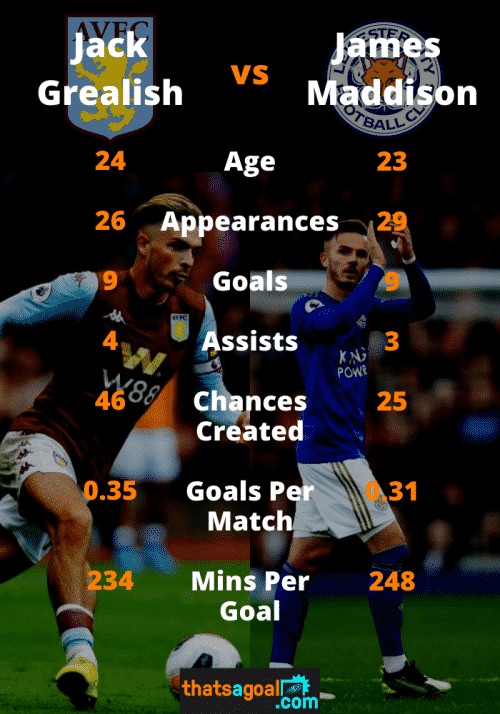 There is a huge difference in the quality of club the duo play for.

Whilst Maddison is battling it out at the top end of the table with Leicester in third, Grealish is having a battle of his own – a relegation battle. Villa, currently, sit 18th.

It could be argued this makes it harder for Grealish to succeed; his teammates are worse. It could, however, also be argued that it’s easier because he’s the star man, whereas Maddison is just a piece of the jigsaw at Leicester.

This time next year, both players could play for different clubs.

Grealish will almost certainly leave Villa in the summer, especially if they go down.

Maddison has been linked with a move to Manchester United of late – could we see the two playing together next season?

Man Utd have identified Jack Grealish as one of their main targets for the January transfer window. It is believed the 24-year-old has a £45M release clause in his contract. [MEN] pic.twitter.com/skcqTFYWZR

Should Maddison or Grealish be in the England squad?

England have been crying out for a creative midfielder for a while.

Maddison has been in and around the squad, whilst Grealish has never had a call-up – although that’s almost certain to change when the squad is announced for March’s friendlies against Italy and Denmark.

Grealish should be in England team, unbelieveable how he is yet to make the squad

Maddison has made his debut, coming on as a substitute in England’s 7-0 thumping of Montenegro last November, but he’s also been in a bit of trouble after he pulled out of the October friendlies with illness only to be spotted clubbing.

Grealish has had his fair share of controversy, too, none more so than drug rumours, but both players are young and still maturing.

Grealish vs Maddison Verdict – Let’s Love them both

They’re becoming more and more comparable, and those comparisons will become more common when they’re playing for similar level clubs and both in the England squad.

Everyone has their favourite, but can’t we just appreciate them both and be happy that England have two really exciting talents coming through?

Read More: See the Euro 2020 predictions and betting tips as the tournament approaches.

Poland and Slovakia face each other at the opener of Group F, and this game…

This is Scotland first major tournament in a generation, and the opening fixture for them…