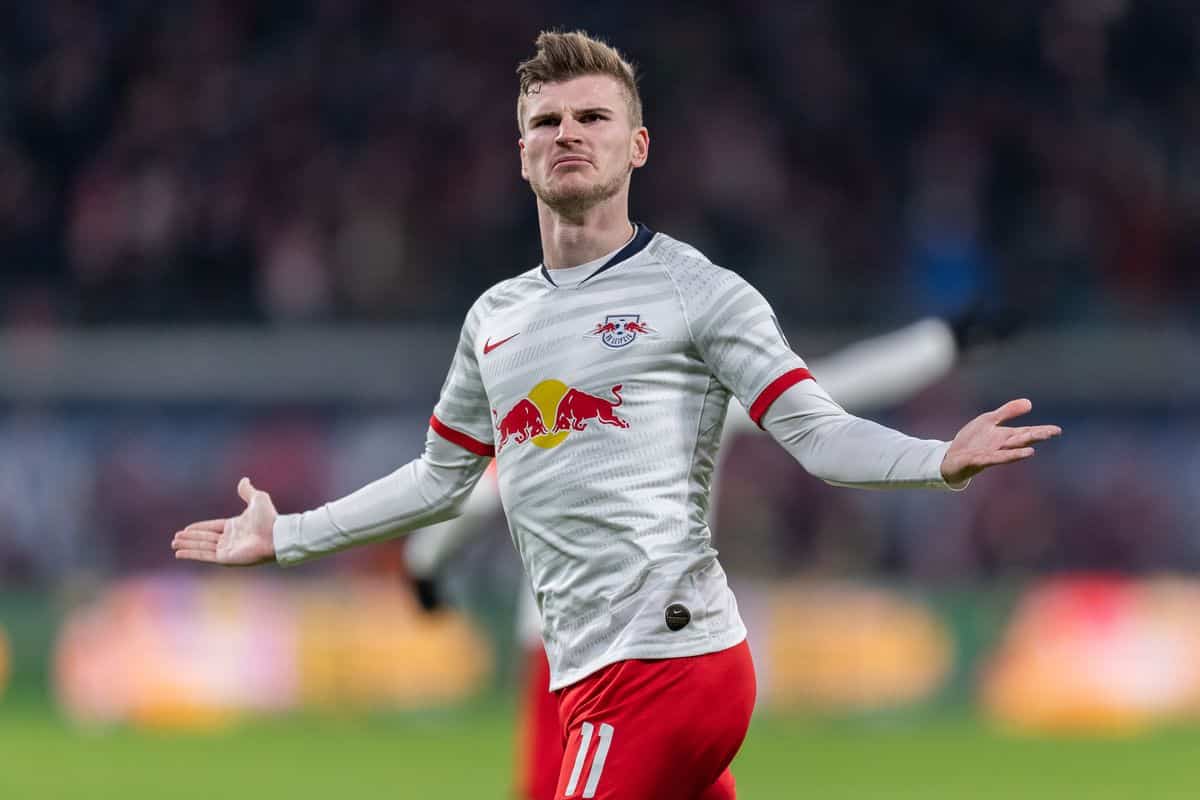 Timo Werner looks set to leave RB Leipzig at the end of the season with no shortage of potential suiters. Liverpool are the current frontrunners for the 24-year-old’s signature but there are a whole host of other potential destinations in the Timo Werner next club odds.

With the Bundesliga set to restart this month, here is a closer look at whether Liverpool are likely to sign Werner at the end of the season, and if not, which other clubs could feasibly sign the German striker?

What are the odds for Werner to Move to Liverpool? – 4/9

Timo Werner has been linked with a move to Liverpool for some time now. The Reds possess one of the world’s strongest front threes but do lack depth. Werner would no doubt be a key figure if he were to arrive on Merseyside with a shift in formation to a 4-2-3-1 a possibility. Regardless, Werner would be a top-quality addition with a proven track record in a major league and all the attributes needed to thrive in Klopp’s side.

From Werner’s point of view, Liverpool would represent a step up from RB Leipzig. The German club are in a title race and regularly participate in the Champions League but there is no doubt that Liverpool are better equipped to win trophies.

Watch all Timo Werner’s goals so far this season

There are a myriad of other interested clubs when it comes to securing Werner’s services. After Liverpool, Barcelona (6/1) are the bookies’ destination of choice. The Spanish giants already have several world-class attacking options but Werner represents a long-term investment with Antoine Griezmann (29), Luis Suarez (33), and even Lionel Messi (32) not getting any younger.

Manchester United (6/1) could certainly do with a striker of Werner’s calibre, currently relying on the all too inconsistent Anthony Martial to lead the line. However, at this moment in time, with Champions League football in doubt, the Red Devils may be considered a step down for Werner.

The Bundesliga leaders, Bayern Munich (17/2), make a habit of purchasing from within their league and have done so with great success in recent years. Bayern certainly have the financial muscle but Werner may not want to play second fiddle to Robert Lewandowski with the Pole at the peak of his powers. We’re expecting Lewandowski and Werner both to feature very heavily in our Bundesliga predictions when the season gets restarted.

Like United, Chelsea (11/1) could also do with a striker of Werner’s ability. Having said that, Tammy Abraham’s development would likely be stunted and the Blues may not possess the pulling power required to attract Werner at this time.

Tottenham (13/1) have a similar issue to Bayern in that their star striker, Harry Kane, will not be displaced. With a lack of Champions League football, this move seems rather unlikely but if Harry Kane does leave Tottenham, there is a route in for Werner there.

PSG, Manchester City and Real Madrid (each 22/1) have the financial power but also have a litany of attacking options and don’t appear to be in for the RB Leipzig forward.

When you get the new Paddy Power free bet offer on joining, you can bet up to £20 and if this bet loses, you will get a refund paid in cash. If your bet wins you get paid out as normal but if it loses you get the cost of that bet refunded as cash.

Join Paddy Power and place a £20 bet. If this bet loses you get a £20 cash refund added to your account.

Review
Claim HereClaim Here
T&Cs apply. 18+. Begambleaware.
Place your FIRST bet on any Sportsbook market and if it loses we will refund your stake in CASH. Max refund for this offer is £10. Only deposits made using Debit/Credit Card or Apple Pay will qualify for this promotion. T&Cs apply. Paddy's Rewards Club: Get a £10 free bet when you place 5x bets of £10+. T&Cs apply.

How much will Timo Werner cost?

Werner is one of the hottest properties in Europe at the moment, but his reported release clause means he would cost £52m.

What are the Timo Werner to Liverpool odds?

Time Werner is 4/9 to move to Liverpool in the next transfer window, this is with Paddy Power.

Which position does Timo Werner play?

Timo Werner is a striker who plays through the middle. He's best known for his goals and he has scored 27 goals in 36 matches so far this season, including averaging a goal every two games in the Champions League.

What team does Timo Werner currently play for?

Werner currently plays for RB Leipzig in the Bundesliga as well as the German national team.

Looking at the transfer odds, it looks likely that Werner will join Liverpool in the next transfer window if he does leave RB Leipzig.