West Ham have picked up four points in their last two to distance themselves from the drop zone.

Burnley are safely in midtable and could give a late push for a Europa League place, especially if they can win against West Ham tonight.

West Ham extended their lead over the chasing pack with a crucial point against Newcastle. Burnley earned a hard-fought point against Sheffield United to keep them in the top half.

The Hammers may have picked up points in their last two but Burnley are very much the form side here. The Clarets don’t give up goals easily and were just ten minutes from recording a third successive 1-0 victory at the weekend. A narrow Brunley victory is the selection for our correct score prediction and if you’re looking for the best bet on the match then Burnley to win or draw this match is 4/5.

West Ham may have turned a corner at just the right time. The Hammers had had an awful 2020 but four points from their last two fixtures has put some daylight between them and the bottom three.

The Hammers have conceded 58 goals, the fourth-worst record at the time of writing. David Moyes’ side have not kept a clean sheet since their 4-0 win against Bournemouth in January.

Five goals in two games is a stark improved for the Hammers who look likely to remain in the Premier League for another season.

Felipe Anderson and Sebastien Haller are dounts for this game.

Burnley made three unbeaten with a well-earned point against Sheffield United at the weekend. The Clarets have only lost one of their last 11 league games and have kept six clean sheets in that period.

Despite key attacking injuries, Burnley have coped admirably since the restart. They have picked up eight points from a reasonably tough set of opening fixtures.

The Clarets find themselves in with a chance of a Europa League qualifying spot and are just three points off seventh at the time of writing.

Ben Mee, Jack Cork, and Ashley Barnes are all expected to miss out.

West Ham have won 37, drawn 18, and lost 34 of their games with Burnley. The Clarets have won three of their last four ties with the Hammers.

Burnley’s bid for a European spot could be set to take a significant boost with a victory against West Ham.

All of these enhanced odds offers are from William Hill and open to all customers, if you need an account you can get the bet £10 get £30 William Hill sign-up offer to spend on today’s football.

This would have been a winning bet in West Ham’s last home match against Chelsea and they also fought out a 2-2 draw against Newcastle last time out. Brighton also seen both teams score in their last match, a 1-1 draw against Sheffield United, and so if you are predicting a West Ham win this could be a good bet.

Burnley to score in both halves – 9/2

The second price boost for tonight’s match is Burnley to score in both halves and given West Ham’s defensive problems I like the look of this bet. They’ve not conceded eight goals in their last four matches.

The amount of goals in matches is starting to pick up as the players get their fitness back after the break and we could see goals at the Olympic Stadium tonight as well. West Ham’s last two fixtures have finished 3-2 and 2-2 and for this bet to be a winner we need goals to be scored by both teams in the first half.

How to use William Hill’s £30 signup offer:

1 Join William Hill by following this link to the offer 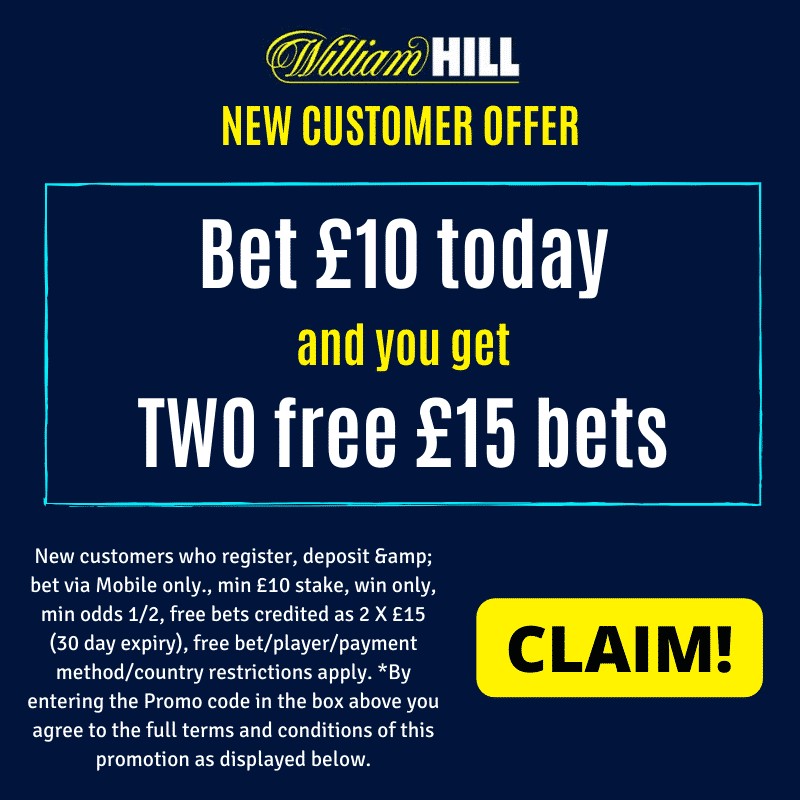 Here we go again. Another season, another next Everton manager odds market. This time the…