The highlight of Day 3 at Royal Ascot will be Stradivarius attempting to win the Gold Cup for the third time.

However, with short odds predicted, four other races are selected for Lucky 15 hopefuls with two competitive handicaps included. The main contenders for these races are discussed below each contest televised on ITV.

This 1m2f Listed race has attracted Sir Dragonet from the Aidan O’Brien yard, with the four-year-old failing to live up to expectations since easily winning the Chester Vase last season. A second-placed effort on his seasonal debut at Naas was a fairly disappointing effort after starting a short-priced odds-on favourite.

Opponent Fox Tal may be a more reliable horse after winning at Doncaster later last season and then finishing a close fourth in the Champion Stakes. He is lightly raced and is saddled by the in-form Andrew Balding.

Top weight Dubawi Warrior is also worth considering. He has won his last three races including a Group 3 event at Lingfield back in February while also scoring on his seasonal debut last term.

Among the other contenders, a drop in class may favour Regal Reality who was campaigned at the highest level last season but did claim victory in a Group 3 Brigadier Gerard Stakes at Sandown. Aloe Vera will be attempting a third win from as many starts but has been absent for more than twelve months.

For this open-looking Group 3 contest staged over 7f, two unbeaten horses are set to feature. King Leonidas from the John Gosden yard has won two low-key affairs, most recently at Newmarket when a comfortable winner, but this race is a much tougher task.

The form of Mister Snowdon is very similar having won both starts with his latest arriving at Yarmouth during the first week of June when finishing strongly at the finish. More improvement is required.

Molatham may emerge as a more likely challenger after narrowly finishing second to Mum’s Tipple on his racecourse debut before winning his next two races. His second victory was in Listed company but he raced too keenly when finishing fourth in a Group 3 event at Newmarket later last term.

Another horse probably worth considering is Lord Of The Lodge who has raced in decent company including a close second in York’s Gimcrack Stakes last season.

With 24 declared runners, this 1m Handicap at Class 2 level can be a minefield for the average punter but Enemy could be an interesting contender. Starting at odds of 1/2, he could only finish second in a race at Yarmouth two weeks previously, but this extra distance may suit.

Johan will be a worthwhile opponent after winning a Class 3 handicap at Newbury last Friday. He won twice from four starts as a juvenile while Dubai Mirage also scored on the same day Kempton when winning by nearly five lengths. A useful third in last season’s Convivial Maiden Stakes at York is also decent form.

It may be also worth considering Finest Sound who prepared for this contest by comfortably winning a Class 4 handicap at Haydock earlier this month and was a consistent performer during his 2-year-old days. 2,000 Guineas seventh-placed horse Starcat may be worth watching at this level especially as he won his only race last year.

After suffering a very narrow defeat in a low-grade race at Newbury last week, African Dream should be fitter for this Class 2 event staged over one mile. The way she finished that seven furlongs contest suggests even better at this slightly extra distance. She also won at Lingfield earlier this year in a similar race and is very lightly-weighted.

Among the others to consider is Soffika who competed twice last season. She won her opening race at Pontefract before catching the eye when a close second in a Newmarket Group 3 contest. This one-mile trip may be more suitable than the seven furlongs that day.

Another challenger is likely to be Declared Interest who won over this distance at Chelmsford last week. However, the strength of the opposition is debatable with the race being a Class 4 handicap. Take note also of Dubai Love who campaigned creditably in Meydan earlier this year and comfortably won a Listed event over this trip.

Through the Card Free Bets 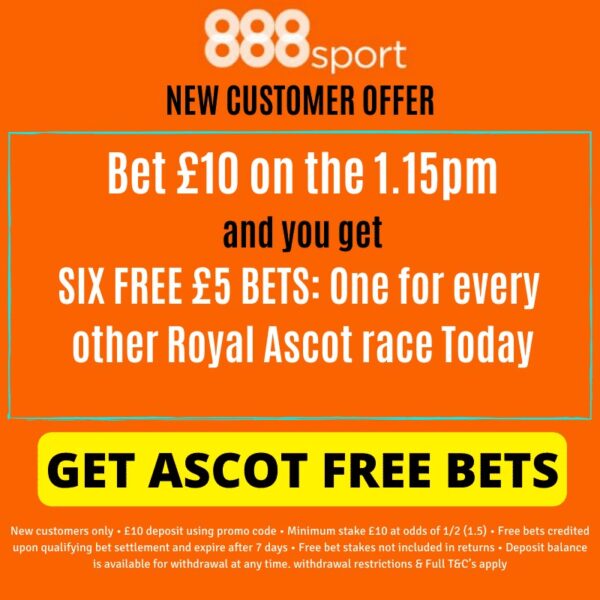 For the fifth day of the Royal Ascot meeting, there are three Group 1 races…