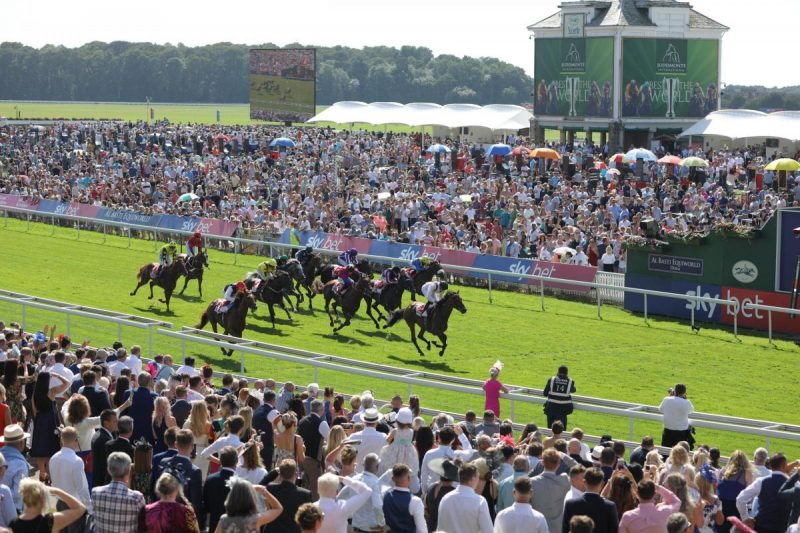 It’s Day 1 of the Ebor Festival at York and Kyle has picked out race by race selections for the opening card on Wednesday 19th August. The feature race is the Juddmonte International.

There are five of the seven races live on ITV and the action gets underway at 1.45pm. As always, 888Sport are running their bet £10 on the first race to get 7 free £5 bets offer and that is the featured promotion we would recommend you use for this week’s York betting tips.

First up we have the Sky Bet And Symphony Group Handicap over 5f, there are 22 runners in this Class 2 contest. My selection is JUSTANOTHERBOTTLE E/W for the Kevin Ryan team and Kevin Stott on board. He is a speedy handicapper over 5f who was a good third at Ayr on only his second run for the new stable. His form has been going in really well since moving stable from Declan Carroll. Kevin Ryan has an excellent record in this race and with a good draw (1) he holds good value as an each-way bet at the current odds of 18/1.

I feel he will run better than the 9th he run in this last year. Jawwaal holds leading claims for this and has the chance to progress again even with an 8lb rise. Arecibo ran well in this race last year when a close third to Dakota Gold and was 4lb higher 12 months ago. Magic J can run a big race for Ed Vaughan. Lahore has won over C&D this season.

Aplomb and Jonah Jones will be ones to watch in the market. Acclaim The Nation is in good form since the restart of racing. Copper Knight is a 4-time C&D winner but hasn’t been great of late however he is falling down the handicap. Soldiers Minute is another course winner and was third to Mucika, who is also running in this race when, last seen here 24 days ago.

Next up we have the group 3 Tattersalls Acomb Stakes over 7f and CLOUDBRIDGE looked a good prospect when he made a winning debut at Leicester over 7f earlier this month. He stayed on well and clocked a good time in finishing. There is plenty more to come from Charlie Appleby’s 2-year-old and I feel he is the one to beat here.

Darvel won on his last start at Ayr over 6f 30 days ago. He won by 2 lengths that day and has been upped an extra furlong for a team who does well with 2-year-olds at this meeting. Gear Up was a C&D winner here when he won on his debut last month and he will look to continue his good form.

There is more to come from Titan Rock and at 12/1  he is one to watch. Royal Scimitar will look to progress again after winning last month at Newbury over 6f.

We are edging closing to main event the Juddmonte but before we get there we have a mouthwatering contest in the Group 2 Sky Bet Great Voltigeur Stakes over 1m 3f. Mogul was mightily impressive when beating Highland Chief and Subjectivist in the Gordon Stakes at Goodwood 20 days ago. He was poor in the King Edward VII stakes back in June at Ascot but came back with a 6th in the Derby.

He is the current favourite in the betting for this race but will face a real test against the new kid on the block Darain, who has proved his worth in his first two outings. He has a strong family pedigree and is an exciting prospect who will be looking to progress again. Roberto Escobarr can’t be underestimated in this contest after winning at this track last month and has looked a smart type in his first two outings.

But I am going for a each way selection here in PYLEDRIVER, who shaped well when a runner up in a Group 3 at Kempton on his return to the track and followed that up with a brilliant performance in the King Edward at Royal Ascot. He was humbled in the Derby but it is easy to forget that run and with dropping back down in trip he is one to watch.

OFFER: Get a £20 CASH refund if your first bet loses when you sign-up to SBK here.

Claim HereClaim Here
New customers only. Deposit £20 using Debit Card, bank transfer or Trustly. Up to your first £20 of losses will be refunded as CASH within 24 hours of qualifying bet having been settled. T&Cs apply.

Now we move on to the race of the card potentially the race of the week at York the Group 1 Juddmonte International Stakes over 1m 2f and its hard to go against GHAIYYATH, who is making a name for himself in Group 1’s with brilliant performances of late in the Coronation Cup at Newmarket when beating staying superstar Stradivarius and then following that performance up with a win in the Coral-Eclipse. He beat Enable that day and is the one to beat here and is in red hot form.

Magical won 3 Group 1’s last season and has won a few already this season and can be a leading contender for the team of Aidan O’Brien and Ryan Moore. Lord North is the danger for me and can progress again after winning the Prince Of Wales at Ascot 63 days ago when last seen. Kameko is taking to this trip for the first time and the winner of the 2000 Guineas can run a big race here.

In the Sky Bet Handicap over 2m 56y with a field of 17 runners, I am going for an each-way in the form of SOLO SAXOPHONE for Ben Haslam and jockey Paul Mulrennan. He has been in red hot form for his new stable since leaving Dan Skelton’s yard. He moved back to the flat and completed a hat-trick when winning here over C&D back in July. He was third at Ascot when last seen 25 days ago but merits respect for me and with his usual partner back on board, watch out for 6-year-old.

Rochester House is another who can progress further again and is one to keep tabs on as he is currently 14/1 in the betting odds. Summer Moon steps down in trip and will be looking to bounce back from some disappointing runs. Here and Now won this race in 2018 and missed this last year so he will be looking to win his crown back.

True Destiny should have more to show for Roger Charlton and can be a contender. Volcanic Sky has top weight to overcome (9st 10lbs) for Jockey Oisin Murphy and can be a big threat if he overcomes that.

Monsieur Lambrays is looking to complete a hat trick for Tom Clover after winning here last time over C&D. He has a difficult draw to navigate but can be a danger. Make My Day is stepping up in trip here and has hit the ground running (literally) for trainer Ralph Beckett when winning at York back in July. He can be a big player here.

In the second last race of the day, 12 runners are due to take the field in the Class 2 Sky Bet Fillies’ Sprint Handicap over 5f and my pick is SAMPERS SEVEN for Michael Appleby and jockey Silvestre De Sousa. He bounced back from an under par run at Lingfield when landing a winner over C&D here last month. That success came with De Sousa on board and with a good draw (1) I feel he has a great chance here to land a double. Keep Busy will be hoping for rain as her best form comes in the mud. Jockey Danny Redmond claims 5lb.

Dancin in the Street will be trying to get back to form after a poor performance in a Group 3 here back in July. Pink Sands’ jockey Cieran Fallon claims 3lb and with cheekpieces on for first time she will be looking to add to her one victory which came at Ripon. Lady In France is an interesting contender for Karl Burke. The same goes for Glamorous Anna.

Our last race of the day is the Sky Bet Nursery over 6f my tip is MUTAZAWWED for trainer Mark Johnston and Jim Crowley. He got off the mark at Lingfield over 6f in June and has had solid efforts in defeat since. He was beaten by a head in a Nursery at Hamilton 18 days ago. He may prefer further but I feel he can put in a big performance and be a leading player here still. Churchill Bay is a progressive type and can be of interest on his Nursery debut.

Line of Departure is looking to complete a hat trick and has to be considered. Cairns Island can progress again for Kevin Ryan and Pure Dreamer is stepping up in again after trying 5f in his second race. Mark Johnston has another contender in Toussarok who is going into his first Nursery.

Open a new SBK account and place £20 worth of bets on York, if you lose you get refunded in CASH!

1 Join SBK using this link to download the app