Both Teams to Score Tips for Tuesday 30th January 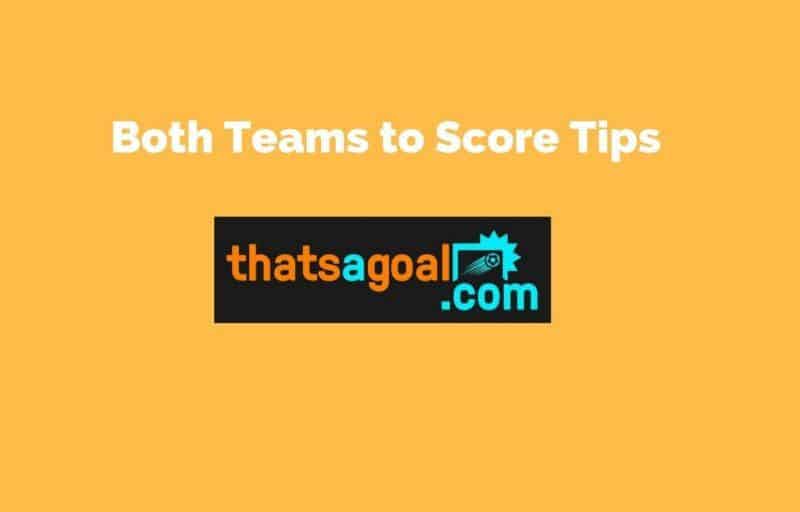 Both teams to score tips for Tuesday’s matches across the English football. Our football tipster has picked out four betting tips from the BTTS coupon.

There are plenty of midweek fixtures upcoming, including three Premier League games on Tuesday which look set to be entertaining match ups. We have picked out two of those games, along with a match each from League 1 and League 2. We just need all four ties to have both teams finding the net to land this bet.

Both Teams to Score Tips

Huddersfield are struggling in the league and realistically their main issue is their lack of goals. However, looking at their home form it may be a surprise to see they have only failed to find the net once in their last 11 games at the John Smiths Stadium. It’s not like they struggle to do that against the big boys either, they have already bagged against Man City, Chelsea and Man Utd, including a 2-1 win over the latter. They are facing a Liverpool side who come into this game on the back of a 3-2 defeat at the hands of West Brom on Saturday. The signing of Virgil Van Dijk hasn’t shored up a defence which has conceded 22 goals in 12 games on the road. Six of Liverpool’s last eight games would have seen this football betting tip land and we expect the same to happen here.

Both these sides come into this game in decent form and will hope to propel themselves further away from the drop zone with a win here. The Hammers urgently need to address their defensive frailties, only Stoke and Watford have conceded more goals than them this season. Amazingly West Ham’s last six games have seen both teams score, so it shows they don’t struggle to find the net themselves, however will they be able to keep out Zaha and co on Tuesday. Palace have been involved in some entertaining games recently. 29 goals have been scored in their last 10 matches and with Roy Hodgson seemingly giving his side chance to attack, a goal fest looks likely here.

Blackburn are on a great run of form, having only lost once in their last 22 games and that was in the cup against Hull. That run is largely down to their free scoring attack. Only leaders Wigan have found the net more than Rovers, but they sit above them in the league because of their defence. Wigan have conceded half the amount of goals Blackburn have. It shows Blackburn’s gung-ho approach does have its pit falls, but certainly provides entertainment for their fans. Walsall won’t be expected to gain anything points wise from this game, which should give them a free hit so to speak. They aren’t shy in front of goal themselves, proven by the fact they have only failed to score away from home twice in their last 13 games, so expect them to trouble the home sides back line on Tuesday.

We finish our both teams to score tips with a game from League 2 as Lincoln host Newport. Lincoln recently went on a run of keeping four clean sheets in a row, but since then they have conceded 10 goals, a run of five games in a row without a shutout. They only lost one of those matches though, so it goes to show they don’t struggle in front of goal, averaging over two goals a game in their last seven outings. Newport had a great result in the FA Cup at the weekend as they held Tottenham to a 1 -1 draw, earning a visit to Wembley in turn. That game extended their unbeaten run to seven, but amazingly and also positively for our bet, they have conceded exactly one goal in each of those games. It’s hard to predict a result here, but goals certainly look like they will be on the cards. 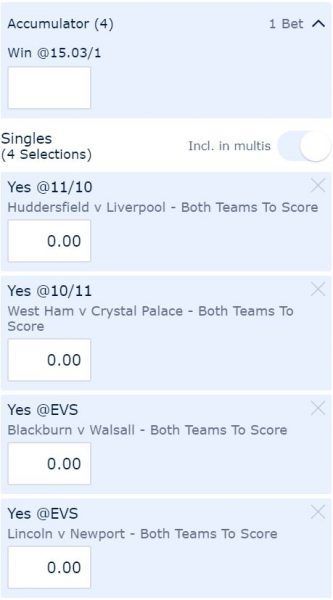 Open a new William Hill account using the steps below and unlock their 3 free £10 bets offer for Thatsagoal readers. A £10 bet on tonight’s both teams to score tips wins £160 cash.

You will only win the full £160 in cash if you have a William Hill account, otherwise you win less.

How to 3 free £10 bets from William Hill today:

1 Click this link to William Hill and open an account?️

Get the latest football betting tips from thatsagoal tipsters.

Other Both Teams to Score Free Bets

Football Index: What is it & How to Win Football Betting Free Bet

Football Index branded itself in 2015 as an alternative to traditional sports having a bet,…

When you open a new sports betting account with Grosvenor Sport today, you will get…

The Premier League returns this weekend after the latest international break, and Unibet are celebrating…