Manchester City vs Napoli betting tips and predictions for the Champions League clash on Tuesday 17th October at 7:45pm. Read today’s betting preview for the match below.

The Champions League has thrown up a mouth-watering tie on Matchday 3 with Napoli visiting the Etihad Stadium in Group F. These two sides have thoroughly entertained their fans this season and both sit top of their respective divisions following notable weekend results. City hammered Stoke 7-2 and could welcome back Sergio Aguero for this encounter (he was rested at the weekend). Napoli won 1-0 at Stadio Olimpico on Saturday evening and are now two points clear of Inter at the top of the Serie A table. The Italian outfit has already been defeated in this competition after slipping up in Donetsk at the beginning of September and they’ll be hoping to avoid similar away day (light) blues here.

We’re starting with our Manchester City vs Napoli best betting tip for today.

Our Manchester City vs Napoli tips start with a nice chunky price for BTTS in the first half. With Over 2.5 Goals/Both Teams to Score being a short price, we will take a risk on both sides finding the net in the opening 45. This bet would have landed against Stoke at the weekend and for Manchester City, it also occurred against Barcelona, Celtic and Monaco at the Etihad during last season’s Champions League campaign. Both sides have tremendous firepower and will be desperate to make a fast start.

Both Teams to Score in the 1st Half is 12/5 with William Hill and that begins our Manchester City vs Napoli predictions for Tuesday night.

Napoli have already been defeated on the road in this competition and had a much tougher fixture at the weekend. Whilst City strolled to victory against a hapless Stoke side, Napoli had to fight for 90 minutes against one of their title rivals and it could just tilt this tie in favour of the hosts. We are adding a couple of goals to our Champions League tips to increase the returns.

Many punters will be backing Sergio Aguero, who starts as favourite but he generally takes a couple of matches to get back up to speed. Raheem Sterling has been in excellent form recently and adds plenty of width to the side. He netted against Stoke to continue his excellent start to the campaign and is already off the mark in this competition.

7/4 with 888Sport looks a good price for Raheem Sterling to score anytime that is our final Manchester City vs Napoli predictions for today’s Champions League.

Kyle Walker limped away from the Etihad at the weekend but should be fine to continue here. Bernardo Silva will be hoping for some game time alongside fellow weekend sub Ilkay Gundogan. Benjamin Mendy and Vincent Kompany are definitely out of this tie.

Napoli don’t tend to shuffle their pack despite the games coming thick and fast. They are without striker Arkadiusz Milik who remains sidelined by another frustrating injury.

These sides have only met twice and Napoli remain unbeaten against the Premier League outfit. They drew 1-1 here back in 2011 before defeat in Naples just two months later.

2 Choose your offer and bet £5 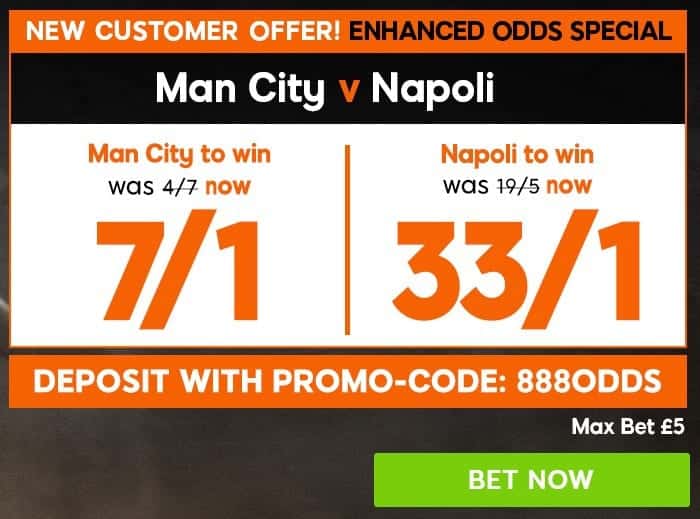