Mexico vs Sweden predictions and betting tips for the Group F match on Wednesday. Mexico are the surprise leaders of the group and need a point to ensure top spot, but Sweden still have a chance of qualifying should they better Germany’s result against South Korea. Can they do it? [global_advert id=”37963″] Mexico shocked Germany […]

South Korea vs Germany predictions and betting tips for the concluding World Cup fixture in their group. Things haven’t quite gone to play for Germany thus far and they need a win here to have any chance of progression. The defeat to Mexico in the first round of World Cup fixtures put Germany on the […]

Germany vs Sweden predictions and betting tips for their World Cup Group game on Saturday June 23rd with an anytime goalscorer tip and correct score prediction included. After suffering a shock 1-0 defeat by Mexico in their opening Group F fixture, reigning World Champions Germany need to recover quickly if they are to mount a […]

Sweden vs South Korea predictions and betting tips for the World Cup 2018 Group F fixture on Monday June 18th at 1pm. Have Sweden got what it takes to land all three points in their opening Group F encounter, or will Shin Tae-Yong’s proud South Korean outfit look to spoil the party? As neither Sweden nor […]

Germany vs Mexico predictions and betting tips for the World Cup 2018 Group F fixture on Sunday 17th June at 4pm. Will Germany successfully retain their title in Russia this summer, or can the Mexicans surprise many a World Cup onlooker in their opening group-stage encounter? According to most World Cup betting tips surrounding the […]

World Cup betting tips for Group F where Germany are joined by Sweden, Mexico and South Korea. Germany will be widely expected to win this group but each of the remaining three sides will fancy their chances of reaching the round of 16. Mexico have qualified from the group stage in each of their last six […] 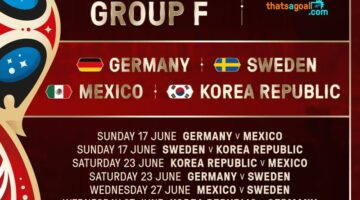 World Cup betting tips for a correct score bet in all six of the Group F fixtures where Germany will be strong favourites to qualify for the last 16. Sweden, South Korea and Mexico make up the other three teams in what looks like a quite competitive group. Germany won the World Cup in Brazil […]


World Champions Germany line up in Group F, a side who are favourites to win the World Cup. See all of our World Cup 2018 Group F betting tips and predictions in this section.

Over the past few years they’ve been devastating, defeating Brazil 8-2 on their own patch no less, and once again they will be the team to beat come June.

No side will have fancied them in the group, so we’d have to look down with sympathy at Mexico, Sweden and South Korea who make up the rest of the group.

Sweden have already enjoyed a taste of giant killing, defeating the Italians in the play offs to make the tournament, so it’ll be interesting to see how they fare, while the ever-present Mexico will also be battling to claim that second spot – who will qualify from World Cup 2018 Group F?
Germany
Germany Odds To Win Group F: 1/3

Odds To Qualify From Group F: 1/14
Bet on Germany to win the 2018 World Cup with a £20 free bet from Paddy Power.
The Germans had a faultless qualifying campaign and go into the tournament as the favourite to lift the trophy at 9/2.

That’s no real surprise, they’ve passed every test over the last few years, their only real flaw a 2-0 defeat to France in the Euro 2016 Semi Final.

Joachim Low and co. will be ready to retain their trophy however and go into the first game against Mexico at 1/2 to win – that looks short but could go into one of our World Cup 2018 accumulator tips.

As usual, Thomas Muller is among the favourites to claim World Cup top scorer, while they’ll also be taking Timo Werner who is banging then in for RB Leipzig. He’s an impressive record for his country and will be solid bet to score in most games throughout the group.

The Mexicans shouldn’t cause too many issues with the second game against Sweden perhaps the toughest game they’ll face. Even so, they are again 1/2 to win the tie and likely seal their place in the Round of 16.

South Korea will be the final game in what will likely be a game simply to secure their place at the top of the group. Germany’s stars are likely to shine once again, with the likes of Manuel Neuer, Leroy Sane, Mats Hummels, Timo Werner and Toni Kroos all contenders for the Team of the Tournament.
Sweden
Sweden Odds To Win Group F: 11/2

Odds To Qualify From Group F: 5/4
Collect a £30 free bet to bet on our World Cup betting tips from William Hill.
Sweden caused a huge shock to qualify for the World Cup by beating Italy and will go into their first major tournament without Zlatan Ibrahimovic in 14 years. That doesn’t mean they can’t step it up though and are second favourites to win the group.

Their first game is South Korea in what should be a must win for the Swedes. They are favoured to do so, but the Koreans are technically gifted and could cause problems. They have done in the past and the legacy of the 2002 World Cup is still paying off.

We’d probably fancy Janne Andersson’s men still here at 23/20 and it could be a big confidence booster ahead of their tie against Germany.

Germany can be susceptible in the Group Stage. Poland earned a draw with them back at Euro 2016, so Sweden will be hopeful of a point at 16/5, although the 24/5 odds on them to win could be one step too far.

Despite this, they’ll set up perhaps the tie of the group against Mexico in the final game. Both will be fighting hard to win, and experience could win out for the Central American outfit. The likes of Javier Hernandez, Hector Herrera and Andres Guardado have formed a solid spine for their nation, so it’s no surprise the bookies are just favouring Mexico at 6/4.
Mexico
Mexico Odds To Win Group F: 11/2

Odds To Qualify From Group F: EVS
Get a £20 free bet from Ladbrokes for our World Cup betting tips.
Mexico will be part of a three-way battle for second spot and could be the most likely to get it if you listen to a lot of people’s World Cup 2018 Group F predictions. They have guaranteed goals in Javier Hernandez as well as strong players who play across top European clubs.

In 2014 they showed touches of real quality in qualifying for the Round of 16, earning a draw with Brazil and beating both Croatia and Cameroon. It’ll give them hope against the Germans in their first tie, where they go into the game at 24/5. A draw may be the most positive result they can get. A strong defence would suggest a 0-0 at 10/1 is worth a World Cup free bet, setting Juan Carlos Osorio’s men up nicely for a second spot.

The bookies are favouring that outcome. A Germany / Mexico straight forecast is at 2/1, but they’ll need to get through South Korea and Sweden first.

They’re clear favourites to beat the Asian giants at 19/20 and are 6/4 to beat the Swedish, although we’d also have a bit of money on the draw here at 2/1.
South Korea
South Korea Odds To Win Group F: 20/1

Odds To Qualify From Group F: 7/2
Fancy an upset? Bet on South Korea with the insurance of a £30 free bet at Betfred.
South Korea earned just one point during the last World Cup and aren’t particularly fancied this time round either. However, they shouldn’t be underestimated and could, at the very least, upset the applecart in the race for second.

They’ll face Sweden first and Tottenham’s Son Heung-min will be key if they’re going to get anything from this game. The’re 9/4 to pick up the result here, while an 11/5 bet on a draw could be a good option.

It would take a serious shock for them to qualify and they will have to get a result against both Sweden and Mexico in their second game. That could be a tougher prospect and the bookies aren’t fancying them at 27/10 to beat the Mexicans.

It’ll be a case of keeping the score down and hoping for the best in their final tie against the Germans. We’re expecting a bottom of the group offering from South Korea once again however.
World Cup 2018 Group F Fixtures
June 17, 2018