Senegal vs Colombia predictions and betting tips for the Group H match on Thursday. Can either side secure their qualification for the knock-out round? Colombia need a victory in this game and cannot afford to drop points here. Will Los Cafeteros qualify for the round of 16?    Senegal vs Colombia Prediction [inline_advert ad=”1″] Anytime […]

Japan vs Poland predictions and betting tips for the Group H match on Thursday. Japan need to take something from this match in order to ensure their qualification for the round of 16 whilst Poland are simply playing for pride. Will the Blue Samurai make it through the group stage unbeaten?    Japan vs Poland […]

Poland vs Colombia predictions and betting tips for the World Cup 2018 Group H fixture on Sunday 24th June at 7pm. Can Colombia bounce back from their surprise opening defeat at the hands of Japan, or will it be Poland who successfully reverse their fortunes in Group H this summer?   Fixture: Poland vs Colombia […]

Poland vs Senegal predictions and betting tips for the Group H World Cup fixture on Tuesday 19th June, with an anytime goalscorer tip and correct score prediction included. Senegal’s first appearance at the World Cup since 2002 sees them take on Poland at the Otkrytiye Arena on Tuesday afternoon. Poland, meanwhile, have been dubbed potential […] 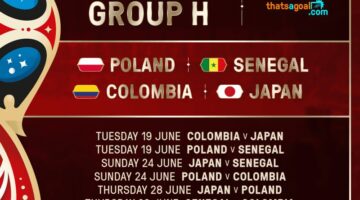 The last World Cup group, group H, looks like one of the tightest sections to call and we’ve predicted the correct scores of every match in the hope of working out some of the best bets for a group including Colombia, Poland, Senegal and Japan. This group looks like a shoot-out between Colombia and Poland […]

World Cup betting tips for Group H where Colombia and Poland are joined by Japan and Senegal. It’s a fairly open group with no clear favourite although Colombia and Poland will be expected to qualify for the knock-out round. Senegal were exceptional in 2002 and are dangerous to write off whilst Japan are likely to quietly […]

Poland vs Lithuania predictions and betting tips for today‘s international friendly match where Poland will be completing their preparations ahead of the 2018 World Cup in Russia. They should win tonight and you can see our betting tips below. Poland have been given a favourable World Cup group including Colombia, Senegal and Japan and they […]


World Cup Group G betting tips and predictions where we could get one of the tightest group finishes. See our Group G preview and early predictions for who will qualify.

Group G promises to be a real cracker with three teams battling it out for top spot. Colombia and Poland are most likely, but Senegal will be a real dark horse this tournament.

The African nation have been climbing the rankings and are an outside shot for qualification. There are some real stars in the team in the likes of Sadio Mane, but let’s not forget Robert Lewandowski, James Rodriguez and Radamel Falcao who will also be lighting up the group.
Colombia World Cup Odds
Colombia Odds To Win Group H: 11/8

Odds To Qualify From Group H: 4/11
Bet on Colombia at the World Cup with a £30 free bet from Betfred.
Colombia are favourites to win the group and a 28/1 shot to win the tournament. They stormed the group back in 2014 going on to the Quarter Final and they will be looking to do the same again.

First up for them is Japan, who they thrashed 4-1 in Brazil and you can back the same result again at 35/1. They’re 5/6 to get the win and we’d expect them to start their campaign strongly in our World Cup Group G betting tips.

Falcao has been in great form for Monaco so far this season and will be hotly tipped to finish the group’s top scorer. He’s 33/1 for the tournament title and plenty of play will be going through him. Their second game will be against another top striker in Lewandowski and the two will be playing it out for the top spot. Colombia shade it as favourites at 29/20, but a draw may also be a good shout at 9/4.

This will set up a tie with Senegal, who have climbed more places than anyone in the World Rankings lately. Mane poses a huge threat but it’s likely the Colombians will come out on top. The Senegalese have caused shocks in the past however so Jose Pekerman will have to make his team aware. It’ll be a tough game as Senegal will have ambitions of their own of making the Round of 16.
Poland World Cup Odds
Poland Odds To Win Group H: 6/4

Odds To Qualify From Group H: 8/15
Get a £50 free bet from Ladbrokes to bet on our World Cup tips.
The Polish failed to make the last World Cup but had a positive Euro 2016 and had a successful qualifying campaign for this tournament. They have a bright and intelligent squad in the likes of Arkadiusz Milik, Lukasz Piszczek and Lewandowski, who they’ll rely plenty on for goals.

He’s a serious game changer and that will lead them in good stead, particularly against Senegal and Colombia who will provide stern oppositions.

First up for them is the African nation, where they are 21/20 to pick up the win. A win here will set them up nicely for qualification, although second up for them will be the tie of the group.

They’re fully capable of getting a result against Colombia, and are at 7/4 to get the victory in the World Cup Group G odds. A draw would likely see both teams through, although the Polish have the easier game on matchday three where they take on Japan.

You can back them at 19/20, but we’d look to the goalscorer markets in this on, with a Lewandowski brace getting our backing.

It’ll be interesting to see how they perform against Senegal and Colombia, take something from the latter and we’d expect a straight forecast of Poland / Colombia at 4/1.
Senegal World Cup Odds
Senegal Odds To Win Group H: 5/1

Odds To Qualify From Group H: 6/4
Get on Senegal’s World Cup campaign with a £100 in bet credits from bet365.
If there was one team that were to cause an upset this summer, our backing would be with Senegal. The African nation not only have a history of doing it, they’re also developing into a really good team, now ranked 24 in the world.

In Sadio Mane they have one of the stars of the Premier League and they’ll be relying on him to terrorise defences. Their first game will be key if they’re to qualify. The Lions of Terranga are at 5/2 to beat Poland, well worth a World Cup free bet, and if they manage that they’ll be well on their way to qualification.

The way the fixtures fall could make this very interesting for Poland and Colombia. They face Japan second up, a must win and one they should see off at 7/5. Colombia will be their final game, which could be make or break for them. We wouldn’t fancy them against some top class stars, so other results could dictate whether the Senegalese make it through.

A Colombia / Senegal straight forecast looks good value at 9/1, while you can also get Poland/Senegal at 12/1.
Japan World Cup Odds
Japan Odds To Win Group H: 8/1

Odds To Qualify From Group H: 7/4
Bet on Japan at the 2018 World Cup with a £30 risk free bet at Unibet.
Japan failed to win a game back in 2014 and we’d expect a similar story here. They face tough opposition in all three of their opponents and go into the group as serious underdogs.

They’re technically very strong, but against the likes of Lewandowski, Mane and the plethora of Colombian talent will be far too much for them. First up for them is Colombia, where they’re a 3/1 shot. That’s perhaps fairly generous, with Colombia likely to steamroller them and almost send them packing before they’ve even begun.

The game they’re most likely to get a result from is Senegal, although that’s even a long shot. You can back them at 9/5 here, although a draw would be more likely at 9/4 for our World Cup Group H betting tips. Shinji Okazaki will likely be their main threat in front of goal, while Shinji Kagawa will also be a key figure in their play.

Poland will be last up for Japan, which could be a big game for the Polish in their qualification attempts. A draw again perhaps will be the most they can wish for at 11/5, although you can back them to win at 16/5 if you’re feeling particularly brave.
World Cup 2018 Group H Fixtures
June 19, 2018
Colombia v Japan, 13:00, BBC