Home World Cup Betting Tips & Predictions Is this the England Starting 11 for the 2018 World Cup?

As England continue their World Cup warm-ups we have looked at the probably starting line-up for their first Group G match against Tunisia on Monday 18th June.

Jordan Pickford looks like he’s secured his place in goal barring any injuries.

“It was definitely a good night for Jordan,” said Southgate following the 1-0 win against the Netherlands.

“He transferred what we know he can do into an important game. A game away from home, so that was good for him.”

Southgate went on to praise Pickford’s ability to play with his feet and praised the way he started attacks.

It looks like Southgate will go with a back three, using the pace of Walker and Rose as wing backs. It was interesting to see Kyle Walker used as a center half against the Netherlands and it remains to be seen whether that will carry on. Gary Cahill could bring some experience to the team with John Stones taking his place in the middle of the three. Joe Gomez or Harry Maguire are also in contention.

This is where Southgate will have a challenge when picking the England starting line-up for the World Cup. Jordan Henderson looks set to be the England World Cup captain so he’s likely to start and Eric Dier is the most capable in a defensive role. He could even play in the centre back position if England are short. Dele Alli is the man who needs to be fitted into the England starting line-up for the World Cup, could he be deployed in one of the wide positions to assist Harry Kane up front?

If England do play with two out and out wingers then it looks like Marcus Rashford and Raheem Sterling are the front runners. A slight tweak in the formation could see England play 3-5-2 with Dele Alli coming into midfield and Raheem Sterling playing to the right of Harry Kane.

Harry Kane is a pivotal member of the England starting line-up for the World Cup and it is imperative for England’s chances that he is fit for their opening match on June 18th. Kane is the real world class player in this England squad and he could fire England to the latter stages of the competition.

Is this the England World Cup 2018 Starting Line-up? 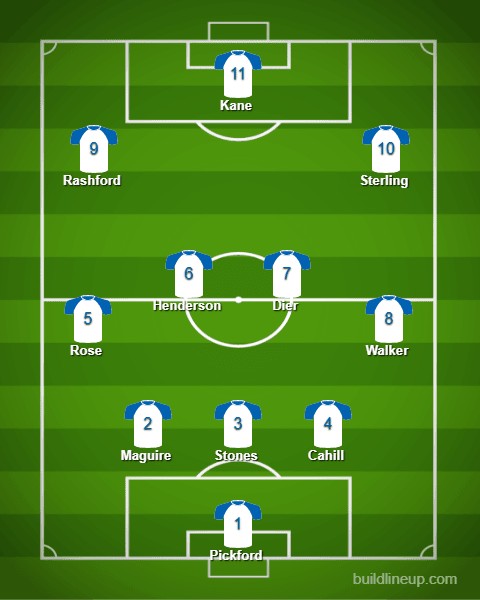 If England Decide to play a 3-5-2 Formation 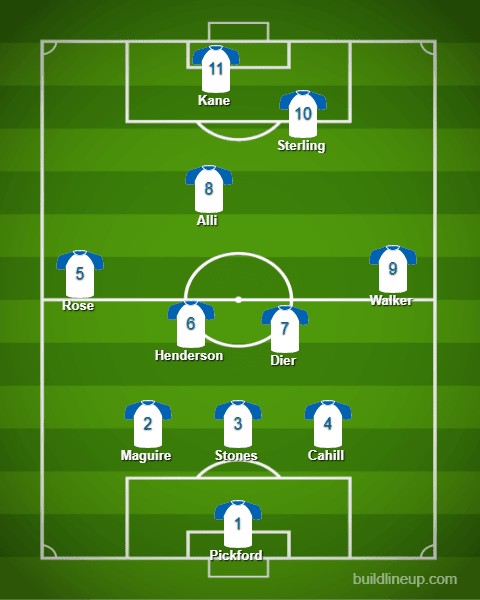 How will England to at the World Cup this summer? We’ve predicted England’s route through the World Cup and it looks vital to win the group. The Group G match against Belgium could be a key component to England’s World Cup campaign and we’re be betting on an England win if Harry Kane is available for selection.