When it comes to showcasing the fullest extent of their collective potential on the international scene, Nigeria have often failed to live up to the mounting hype and expectation that seems to surround their team.

Despite a subtly abundant wealth of options to choose from ahead of the 2018 World Cup in Russia, many football onlookers have already cast the Super Eagles aside in light of their upcoming Group D opposition.

Will Nigeria qualify from Group D?

The Super Eagles have failed to implement their so-called dominance among the prestigious African cup of Nations in recent years, losing much of their prior pedigree to the likes of Egypt, Morocco and a whole host of others.

Yet this summer’s upcoming Group D proceedings offer Nigeria the chance to re-acquaint the rest of the world with what they are capable of. If their star names effectively turn up at the 2018 World Cup in Russia, Nigeria should be expecting to achieve safe passage from the group-stages.

Who will be Nigeria’s star man at the World Cup?

Nigeria play host to several exciting names who could well prove their worth once the 2018 World Cup finally comes around. Victor Moses, Alex Iwobi and Kelechi Iheanacho are just some of the recognised personnel expected to thrive among the opening group-stages.

In Leicester City’s Wilfred Ndidi however, Nigeria possess one of the most exciting young stars to make his name among the English top-flight in recent years. This summer’s upcoming tournament could prove the perfect stage for the 21-year-old midfielder to thrive.

Wilfred Ndidi has made more tackles + interceptions combined (153) than any other player in Europe's Top 5 Leagues this season.

Ndidi has arrived at the King Power Stadium with the task of filling N’Golo Kante’s largely sacrosanct boots. He represents a player with drive, determination and heart – with mounting technical ability that could soon set the world alight.

World Cup betting tips could begin to see Wilfred Ndidi become Nigeria’s star man at the 2018 World Cup. If all goes well for the 21-year-old Nigerian international this summer, expect Ndidi to soon find himself on the move from Leicester just like N’Golo Kante before him.

What are Nigeria’s Group D fixtures? 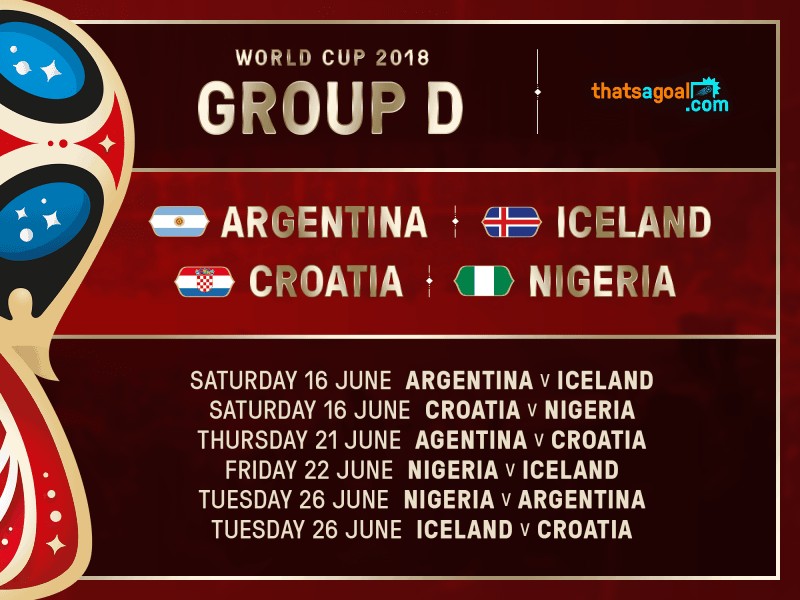 Croatia – Most World Cup onlookers are expecting Croatia to come out victorious against their opening group-stage opposition. Nigeria can nonetheless break Croatian hearts with a strong introductory performance, likely catching their European counterparts off-guard with their lightening efficiency on the break.

Iceland – Again, this is one particular fixture that could go either way. Nigeria play host to a wider array of established talent within their first-team ranks, but as the Africans have lacked both team cohesion and chemistry on several previous occasions, perhaps Iceland’s effective work ethic will ultimately come out on top in this one.

Argentina – Nigeria possess the potential to wholeheartedly upset Argentina this summer, perhaps more so than either of their remaining Group D opposition. Then again, Argentina will likely find themselves focussed and fixated at this summer’s finals. Any potential success against the South Americans will require the utmost concentration from Nigeria, something the Super Eagles arguably lack within their chosen starting XI.

This team have enough about them to book a hard-earned place among the knock-out stages of the competition. If Nigeria can successfully traverse their opening World Cup Group D proceedings, a place among the quarter-finals could well await this determined outfit.

But whilst Nigeria could make it further than the rest of their African contemporaries this summer, the Super Eagles could equally falter at the first hurdle and prove unable to showcase themselves against both Croatia’s intelligence and skill, as well as Iceland’s hard work and endeavour. Most World Cup football predictions seemingly hold Nigeria’s chances in a less than favourable light.