Iceland vs Croatia predictions and betting tips for the World Cup 2018 Group D fixture on Tuesday 26th June at 7pm. Will Croatia take their foot off the pedal in this final Group D encounter, with Iceland still looking to book a prestigious slot among the latter stages of the tournament?  Fixture: Iceland vs Croatia […]

Argentina face a must win match tonight against Nigeria in World Cup Group D and we’ve picked out a same game multi-bet at odds of 21/1 with Paddy Power. You need a Paddy Power account to bet on this and if you open one today you get a £20 risk free bet. Open a new […]

Nigeria vs Argentina predictions and betting tips for the World Cup 2018 Group D fixture on Tuesday 26th June at 7pm. Can Argentina save themselves from embarrassing elimination in this final Group D battle, or will it be Nigeria who ultimately come out on top in truly exhilarating style?  Fixture: Nigeria vs Argentina UK Kick-off […]

Open a new Coral account and you’ll qualify for a massive 40/1 on Argentina to beat Nigeria in the World Cup today.  Argentina need a win in tonight’s World Cup match and they should get it, to at least give themselves a chance of qualifying for the last 16. If they win you will turn […]

Croatia vs Nigeria predictions and betting tips for the World Cup 2018 Group D fixture on Saturday 16th June at 8pm. Will Croatia successfully assert their dominance in their opening group-stage encounter, or have Nigeria got enough about them to pick up all three points from Zlatko Dalic’s side? Big things are predicted of this […]

Argentina vs Iceland predictions and betting tips for the World Cup 2018 Group D fixture on Saturday 16th June at 2pm. Can Lionel Messi and co. claim all the spoils in Argentina’s opening Group C encounter, or have the good times only just begun for Heimir Hallgrimsson’s Iceland upon the international scene? The South Americans […] 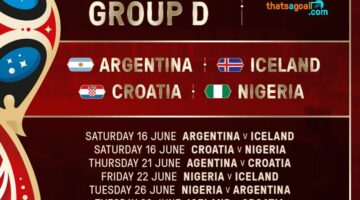 World Cup betting tips for Group D where Argentina are joined by Croatia, Iceland and Nigeria. Argentina will be widely expected to win this group but Croatia will fancy their chances of an upset and it’s hard to rule Nigeria or Iceland out of the predictions too. This looks like one of the few groups […]


Group D has the potential to be a real firecracker this summer. Argentina are of course the standout team in the group but even they had a few wobbles in qualification. Who will qualify from the group and what are our World Cup 2018 Group D betting tips going to be?

Joining the South American giants are Croatia, Nigeria and Iceland, who all have pedigree in major tournaments, the latter producing a true underdog story at Euro 2016.

Will we be blessed with the same again? Well we expect plenty of twists and turns in this one.
Argentina World Cup Odds

Odds To Qualify From Group D: 1/8
Bet on the World Cup winner with a £20 free bet from Coral.
We expect Argentina to qualify with ease from Group D. They’re 8/1 favourite to win the World Cup after reaching the final four years ago and Lionel Messi will be desperate to finish off his medal collection.

First up for Jorge Sampaoli’s side is Iceland and they’ll be well aware of the events that went down in France a few years ago.

They can’t be underestimated, and Argentina go into the game at 3/10 in the betting odds for the World Cup. It’ll be a chance for Messi and Co. to set a benchmark and send a message to their rivals.

Croatia are next up for Argentina, who have a strong side from the midfield forward. It could make for a real quality game with both being exciting on the attack and a little lacklustre at the back.

Argentina are of course favourites for this one too and will be hoping to wrap up qualification in this one. It won’t be easy though and we wouldn’t be surprised by the draw at 5/2 with this one.

Nigeria will be the last game and we’d fancy this one to be the easiest of the round for Argentina. It’s unlikely the Nigerian defence will be able to cope with the likes of Messi, Sergio Aguero, Paulo Dybala and the rest of their huge pool of attackers. It’s a matter of how many.

A 4-0 win looks good value and Argentina storming into the Round of 16.
Croatia World Cup Odds
Croatia Odds To Win Group D: 5/2

Odds To Qualify From Group D: 4/7
Bet on Croatia at the World Cup 2018 with a £30 free bet from William Hill.
The Croatians will face off against Iceland again after finishing second to them in qualification.

They’re a side full of talent with the likes of Luka Modrić, Ivan Rakitic and Ivan Perišić. Then they have the experienced and lethal Mario Mandžukić leading the line. They’ll trouble anyone, and we’d fancy them in an Argentina/Croatia straight forecast at 7/4 for our World Cup 2018 Group D betting tips.

They’ll take on Nigeria in their first game, and while the Super Eagles are a decent side, they’ll want to kick off with a win. They’re at 5/6 to do so with the bookies, and we’d perhaps fancy Mandžukić to be the group’s top scorer before heading into the knockout rounds.

Argentina is their next game in what they hope will be a right one. The Argentinian front line oozes class so Dejan Lovren and the rest of the Croatian defence will have to stay strong. A win for Zlatko Dalic’s side is at 17/5 and would be a huge result to probably seal qualification.

Iceland will also prove a tricky obstacle in their final game. Both won their home games against each other in qualification, which probably means only one thing – a draw!

That’s priced at 11/5, while the Croatians do go in as favourites at 10/11.
Iceland World Cup Odds

Odds To Qualify From Group D: 9/4
Get a £30 free bet for the World Cup this summer at Betfred.
Iceland may well be everyone’s second team this summer thanks to their heroics throughout Euro 2016.

They sensationally knocked out England in the tournament and will be after some big scalps again.

They topped the group in qualification and are improving significantly under Hermann Hreidarsson and with Gylfi Sigurdsson pulling all the strings, they’re a decent prospect for another shock.

Maybe not against the Argentinians though, who they face in their first game. Bookmakers such as William Hill are offering a staggering 17/2 on Iceland, and we’d have to agree. While they got shock results against England and Portugal, an Argentinian team with Messi, Aguero, Dybala, Higuain and Mauro Icardi is a completely different animal.

They are more than capable of results against Croatia and Nigeria. They’ve already proved they can beat Croatia in qualification and are at 10/3 to do so again when they play in the final fixture, it is well worth a free bet.

It could be a vital game, with Iceland favourite to beat Nigeria in the second match at 7/4. We’d fancy them to do so in our World Cup predictions for this Group D clash. The Icelanders are a well-oiled machine and their togetherness is something that can’t be underestimated.

Qualification is a realistic possibility and a straight forecast with Argentina topping the group is worth backing at 4/1.
Nigeria World Cup Odds
Nigeria Odds To Win Group D: 12/1

Odds To Qualify From Group D: 11/4
Use this £20 free bet from Ladbrokes on our World Cup bet predictions.
Nigeria qualified for the World Cup comfortably but face tough opposition in World Cup Group D. They’re the least favoured team to reach the knockout stages and it’s no real surprise. We expect them to struggle in this one, with a couple of points perhaps the most they can look forward to.

They’ll take on Croatia in the first game, a tie they’re at 3/1 to win and it will be a key one if they have any hopes of qualifying. It’d be likely they would qualify with Argentina topping if they were and a that straight forecast is at 11/2.

The Argentinians are the last game for them, which could mean trouble if they’re in with a chance of qualifying going into the last game. Argentina are a large 4/9 favourite for that one, while their second game against Iceland on June 21, sees them with odds of 29/20 to win.

They did reach the Round of 16 back in 2014, in a Group where they played well against Argentina, losing just 3-2. It would be an incredibly tougher ask this time round in a much harder group.
World Cup 2018 Group D Fixtures
June 16, 2018