Open one of the betting accounts below and you’ll get some massive odds for Brazil to beat Serbia. If you don’t have an account with one or more of the below bookmakers, we’d recommend opening one tonight to take advantage of the special offers. TOP OFFER – 40/1 for Brazil to win @ Ladbrokes. Follow […]

Serbia vs Brazil predictions and betting tips for today’s concluding round of World Cup Group E fixtures. Three teams can still qualify from this group, including both Serbia and Brazil – but it’s Brazil who are currently in top spot. Brazil will know they need a good performance to qualify for the last 16 tonight, […]

Switzerland vs Costa Rica predictions and betting tips for the World Cup Group E fixture on Wednesday 27th June, with any anytime goalscorer tip and correct score prediction included. The final group game for these two sides takes place on Wednesday evening and although it’s a dead rubber for Costa Rica, Switzerland have it all […]

Costa Rica vs Serbia predictions and betting tips for the World Cup 2018 Group E fixture on Sunday 17th June at 1pm. Can Costa Rica serve to impress just like they did at the 2014 World Cup in Brazil, or will Serbia simply prove too much to handle for this determined Central American outfit?   […]

Brazil vs Switzerland predictions and betting tips for the World Cup 2018 Group E fixture on Sunday June 17th at 7pm. Can the South Americans make emends for their disastrous exit from the 2014 World Cup, or will the Swiss serve to frustrate their Brazilian opposition in this opening Group E encounter?  Brazil have it […]

World Cup betting tips for Group E where Brazil are joined by Serbia, Switzerland and Costa Rica. Brazil will be widely expected to win this group but the two European teams will be aiming to cause an upset. Meanwhile Costa Rica surprised us all in 2014 and will be hoping to replicate that unexpected success.  A […] 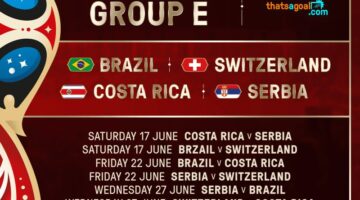 Today’s football betting tips for the World Cup come from Group E and we have had a go at predicting the scores of each of the six matches in the group where pre-tournament favourites Brazil will be expected to win the group with ease. Switzerland, Serbia and Costa Rica will do battle for second place […] 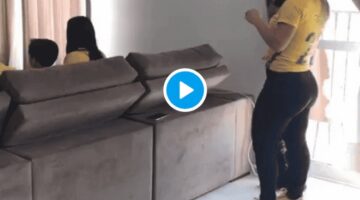 Playing for your country at the World Cup is something most of us can only dream of, but dreams came true for Brazil and Corinthians full-back Fagner after his surprise call up to the Brazil 23-man World Cup squad. Following the injury to Dani Alves, Brazil needed a back-up right back and manager Tite has […]

Brazil will have been pleased with their group when it was drawn and they’re far and away favourites to come out of Group E. 2014’s hosts are one of the favourites to win the World Cup so there will be plenty of eyes on Group E and how it plays out.

Joining the world’s most successful side is Switzerland, along with Serbia and Costa Rica, who caused a number of shocks four years ago.

We’re looking forward to watching Brazil navigate their way through this one, particularly following their embarrassing knockout against Germany in their last World Cup game. The fight for second will be an interesting one and if Costa Rica bring their A-game it could be a three way battle for the Round of 16.
Brazil World Cup Odds
Brazil Odds To Win Group E: 1/4

Odds To Qualify From Group E: 1/10
Bet on the best odds for Brazil to win the World Cup with 3 free £10 bets at William Hill.
Needless to say, we won’t be backing against Brazil to qualify in this group. The Samba nation are among the favourites to win their sixth World Cup and the likes of Neymar, Roberto Firmino and Douglas Costa will be among the favourites for the World Cup Golden Boot.

The former is third favourite to pick up the most goals in the World Cup 2018 top goalscorer betting and will line up against Switzerland in their first outing on June 17. It’ll be perhaps the toughest game in the Group Stage, yet they’re still 3/10 to win the game.

It’s be a great start as they look to top the group, but the Swiss can cause problems and while we don’t think they’ll knick it, a bit of rust from the Brazilians could encourage punters to back a draw at 19/5.

From there it should be plain sailing, setting up a Round of 16 tie with most likely Sweden or Mexico. Should things go wrong, it could end up being World Champions Germany.

They’re clear favourites to beat Costa Rica (1/5) and Serbia (4/9) however, and ooze class from the back four and all the way forward. We expect the likes of Thiago Silva, Philippe Coutinho and Neymar to be contesting for the team of the tournament and be there or thereabouts when it comes to the 2018 World Cup Final.
Switzerland World Cup Odds
Switzerland Odds To Win Group E: 6/1

Odds To Qualify From Group E: 5/6
Bet on Switzerland with a £20 free bet from Ladbrokes.
The Swiss are always touted as a tough team to beat at the World Cup and advanced to the Round of 16 in 2014, taking Argentina to extra time. They’ll be tough to get a result from once again, and we’re backing only Brazil to do so.

Very strong defensively, with the likes of Stephan Lichtsteiner and Johan Djourou, they’ll also go into the tournament with plenty of attacking prowess too. With plenty of balance, we expect Xherdan Shaqiri and Breel Embolo to cause some real problems for the likes of Costa Rica and Serbia.

Following their first game against Brazil, they’ll take on Serbia where they will realistically expect to start their campaign to qualify for our World Cup 2018 Group E betting tips. They’re 6/4 to win that one and it would put them well on track to finish second alongside Brazil. That outcome is priced at 15/8 with William Hill and we’d snap their hand off for that in our betting tips.

Costa Rica could cause problems, just as they did in 2014, but it would be a remarkable feat to repeat that and we’d fancy the Swiss to get another win at 10/11.
Serbia
Serbia Odds To Win Group E: 8/1

Odds To Qualify From Group E: 6/4
Get a £20 free bet from Coral to bet on the 2018 World Cup.
Serbia will perhaps go into Russia 2018 as dark horses. They have some real talent in the squad and made the tournament as group winners in qualification.

The likes of Nemanja Matic and Branislav Ivanovic have vasts amount of experience and will provide a solid base for their nation as they look to go beyond the Group Stage for the first time since 1998.

They’ll take on Costa Rica first in what will be deemed a must win if they have any hopes of qualification. They go into the game as favourites at 10/11 but if they underestimate the Central Americans, it could be dreams shattered at a very generous 29/10 for Costa Rica.

The Swiss will come next in what could be a real classic European battle. Both are defensively strong, and they’ll rely on Matic to dictate play. If he can get hold of the tie by the scruff of the neck, they do have a chance, but we’d find it tough to back them in our World Cup Group E bets with any more than a draw with this one (11/5) and a loss against the Brazilians in their final game.
Costa Rica
Costa Rica Odds To Win Group E: 20/1

Odds To Qualify From Group E: 3/1
Fancu an upset? Bet on Costa Rica using this £30 free bet from Betfred.
We’re still recovering from Costa Rica’s breathtaking performance at the last World Cup. The minnows made it through to the Quarter Final back in 2014, beating Uruguay, Italy and Greece on their way, as well as drawing 0-0 with England.

A repeat performance would be phenomenal, and one that would be hugely unexpected. First up is Serbia in what is certainly their most winnable tie. They’re 29/10 and will fancy their chances after what happened four years ago. Again, Joel Campbell will be one of the ones to watch, while they do also have Real Madrid goalkeeper Keylor Navas leading from the back.

They are a team of underdogs however, and even if they were to upset the odds and beat Serbia, Brazil and a final game against Switzerland will likely be far too much for them this time round.