Australia vs Peru predictions and betting tips for the World Cup 2018 Group C fixture on Tuesday 26th June at 3pm. Will Australia claim the spoils in this final Group C encounter, or can Peru reverse their recent World Cup fortunes with a match-winning performance to be proud of?  Fixture: Australia vs Peru UK Kick-off […]

Denmark vs France predictions and betting tips for the World Cup 2018 Group C fixture on Tuesday 26th June at 3pm. Will France finish their group-stage duties with maximum points on the board, or can Denmark spoil the party with one eye on the latter stages of the competition?  Fixture: Denmark vs France UK Kick-off […]

France vs Peru predictions and betting tips for the Group C World Cup fixture on Thursday 21 June, with an anytime goalscorer tip and correct score prediction included. France go into their second of three World Cup group games knowing that a win virtually assures them of a spot in the competition’s knock-out stage. Their […]

Denmark vs Australia predictions and betting tips for the World Cup 2018 Group C fixture on Thursday 21st June at 4pm. Will Denmark take to their upcoming group-stage duties in wholly convincing fashion, or can those determined Australians seemingly halt Age Hareide’s team in their tracks?   Fixture: Denmark vs Australia UK Kick-off time: Thursday […]

Peru vs Denmark predictions and betting tips for the World Cup 2018 Group C fixture on Saturday 16th June at 5pm. Will the South Americans get off to a winning start in Russia this summer, or are Denmark destined to break Peruvian hearts within their opening group-stage encounter? It seems likely that there will only […]

France vs Australia – Win £102 if our Anytime Goalscorer Tip Scores

France get their World Cup campaign underway against Australia in the 11am kick-off and we are looking to bet on this anytime goalscorer tip in the hope of winning over £100 in cash from a £50 sign-up offer.   France vs Australia Betting Tip Antoine Griezmann to score anytime – 21/20 with Ladbrokes. [inline_advert ad=”1″] […] 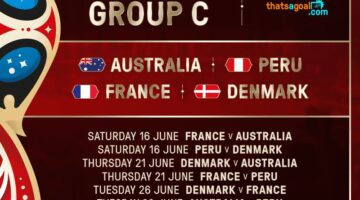 Our football tipster has had a go at predicting the scores from all six World CUp Group C fixtures ahead of the start of the tournament. How many correct score predictions can we get right? Group C is set to be dominated by France and it would be no surprise if they ran away with […]


World Cup Group C gets underway on June 16 and will see one of the Russia 2018 favourites France line up against Australia. Get a grip with our World Cup 2018 Group C betting tips and predictions.

There’s going to be a real battle for that second spot and the games in which Peru, Denmark and Australia play each other could produce some real exciting football. It’s a group that will ultimately be all about the French in what we expect to be a good tournament for Didier Deschamps’ men.

Odds To Qualify From Group C: 1/20
Bet on France to win the World Cup with a £20 free bet at Ladbrokes.
Les Bleus are the third favourite for the World Cup at 11/2 and we’d certainly back them with a free bet to get some added insurance for our World Cup winner bet.

They’ve a fantastic squad with World Cup winner Didier Deschamps at the helm knowing what it takes. We expect them to breeze through the Group Stage and we’d expect Antoine Griezmann to bang in plenty as he bids for World Cup Top Scorer.

First up for them is Australia where they’re 2/11 to win that game. Starting with a bang will be key for France and a 3-0 win looks good value at 5/1.

Peru is next up for France in what could be a potentially tricky tie. The South American side are ranked 10th in the world so can’t be underestimated, although we still expect them to conquer.

The French are 1/ 3 for that tie while a draw at 15/4 could be an interesting place to put your money.

Denmark are last up and we expect the likes of Paul Pogba, Kylian Mbappe and N’Golo Kanye to be too strong for them. Of course, their opposition have Christian Eriksen, who tore apart Ireland in the play-offs, but France are an entirely different beast and should complete their Group C fixtures with another victory. Is France to win all three group matches the best bet of Group C?
Denmark World Cup Odds
Denmark Odds To Win Group C: 4/1

Odds To Qualify From Group C: 4/5
Bet on World Cup Group C with a £20 free bet from Paddy Power.
The Danish are second favourite to qualify from the group but it could be a tough route to the Round of 16 with both France and Peru tough prospects.

The game against the latter will be the big one for them and it’s their first match on June 16.

Age Hareide’s men are at Evens to win that game but it’ll take a huge effort from star man Christian Eriksen who they’ll be relying on to pull the strings throughout the tournament.

They’ll see Australia as a banker, who they will play ahead of France in the final game of the group.

The Straight Forecast odds are suggesting France/Denmark are the favourites to qualify at 6/4 and should they beat Peru we’d see this as an absolute banker bet for our World Cup 2018 Group C predictions this summer.
Peru World Cup Odds

Odds To Qualify From Group C: 6/4
Bet on Peru at the 2018 World Cup with a £30 free bet from William Hill.
It’ll be Peru’s first appearance in the World Cup since 1982 and are somewhat of an unknown quantity despite being ranked 10th in the world.

They reached Russia 2018 with a win against New Zealand in the play-offs and will face their biggest game in recent history when they go up against Denmark on June 16.

It’ll perhaps be the game they need to get a result in with the Danish their closest rivals for second spot. They’re 5/2 for that game and we’d potentially fancy a shock here. The same could apply against the Australians. They’re a nation that really could go either way, just as Costa Rica did four years ago.
Australia World Cup Odds
Australia Odds To Win Group C: 25/1

Odds To Qualify From Group C: 4/1
Get a World Cup free bet when you open a Coral account.
The Australians are among the lowest ranked sides in the tournament and are being given little hope of qualifying by the bookmakers.

We’re of course well aware of a number of players expected to board the plane with the likes of Aaron Mooy, Brad Smith and Mile Jedinak all playing for English clubs, while Tim Cahill will also play his last major tournament.

Their toughest game will come up first, taking on France in a tie they’re 14/1 to win. We wouldn’t fancy that however with the French oozing class.

Against Denmark and Peru though there is perhaps a glimmer of hope. They got to the Round of 16 back in 2006, beating Japan and earning a draw with Croatia, so they do have form.

Last World Cup they were given a real group of death, losing every game to Netherlands, Chile and Spain so they’ll be desperate to have a fairer crack at it this time.

They’re 10/3 to beat Denmark in their second game, with a draw perhaps a nice punt at 12/5, while their final game against Peru they’re at decent odds of 11/4.

Last World Cup aside, they do battle hard and pick up results. It is feasible they can do it again and a straight forecast bet of France/Australia at 5/1 is what World Cup free bets are made for.
World Cup 2018 Group C Fixtures
June 16, 2018