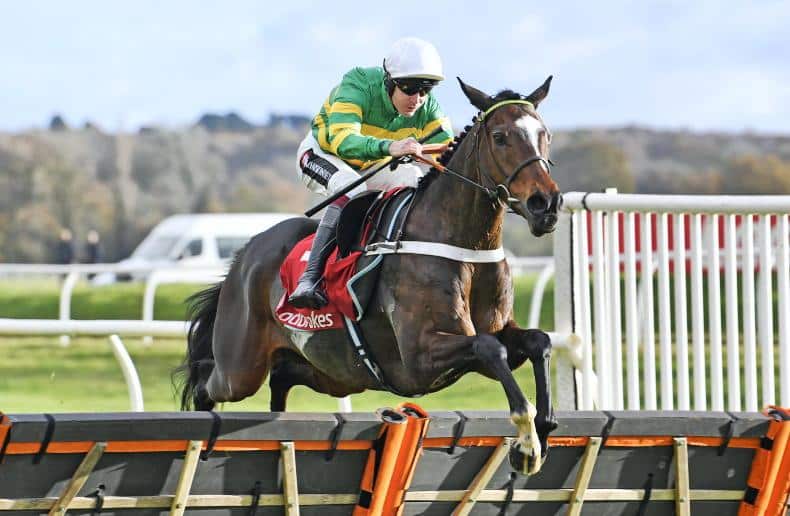 The Supreme Novice’s Hurdle is arguably the race that brings the biggest roar from the Cheltenham crowd, as it is the first race of the week and the first chance punters have to get a win against the bookies.

It has been dominated by Irish trainers in recent years, there have been five Irish-trained winners in the last eight years, four of which were from the stable of Willie Mullins.

Constitution Hill is the current fav and brings 2 impressive performances at Sandown on both soft and heavy ground. The turn of foot he showed on hurdles debut to brush aside a smart one in Might I showed what level of horse we have here. He backed that up by easily despatching his rivals in the G1 Tolworth as his odds suggested he would. The form of that race wasn’t exactly enhanced when 2nd Jetoile finished last in the Betfair hurdle.

Constitution Hill has only been right-handed and hasn’t encountered good ground yet but I believe this horse can do anything and has the speed to burn. He seems a very relaxed horse who would easily cope with the noise of a Cheltenham Festival Day 1 crowd.

Dysart Dynamo has won both his hurdle starts by 19 lengths including the G2 Moscow Flyer (usually the race Willie targets his main Supreme Novices Hurdle fancy). The form of the horses in behind on both occasions can be questioned but he couldn’t have been more convincing. A bumper winner at 2m2f last season may have suggested that 2 ½ miles would have been a minimum this season but Willie has kept him at the minimum trip knowing that Supreme winners have to be able to stay to be competitive.

The talking horse for the majority of the winter has been the £570k purchase of Douvan’s full brother, Jonbon. A winner of all his bumper (1) and hurdle (3) starts, I don’t think we have seen the best of this horse and Nicky Henderson’s Cheltenham 2022 stable tour suggests that too. He has had 1 more start over hurdles than his main market rivals and his jumping stands out the best on the eye.

Despite being unbeaten there seems to have been some crabbing of his form and ability which I would put down to his reputation more than anything else. He has had to make the running on his first 2 starts as they crawled from the flag drop and this would have inconvenienced him. He gave weight to his rivals on his last start when winning at Haydock and without looking sensational on the eye like other contenders, he battled, quickened, and won comfortably enough. His form has been boosted slightly in the last week with Elle Est Belle winning the Sidney Banks and I Like to Move It finishing a close 2nd in the Betfair.

The Ante post favourite at the start of the season was Kilcruit who was so impressive as a bumper horse. This season hasn’t been as straight forward though and he has been beaten at 2m (when 1/14) and 2m4 (when 4/9) in his first 2 outings. He has since won a maiden at 2m and seemed to benefit greatly with the application of a tongue-tie. He can be competitive if he can sort his breathing out as finishing off his races was a problem in his first 2 starts.

Mighty Potter is a horse not to be forgotten about. The highly thought of Gordon Elliott charge was only 3rd in the G1 Royal Bond in November but this was a slowly run race that didn’t suit and the ground was on the quick side for him. He got nis nose in front next time over Xmas when winning the Future Champions G1 on his referred soft ground. He definitely has an EW chance and will benefit from a strongly run race on soft ground.

Dysart Dynamo will represent the Mullins yard here, along with Kilcruit. Kilcruit is a horse coming into favour with a number of pundits and Patrick Mullins has said that that is the horse he’d like to ride in the race given the choice.

However, my selection for this race is going to be JONBON. The Nicky Henderson yard form is a slight concern but Jonbon has done nothing wrong so far and his quick, low jumping is perfect for a Supreme Novices’ Hurdle. He’s gone on to win the Grade 2 Howden Kennel Gate Novices’ Hurdle at Ascot and the Grade 2 Sky Bet Supreme Trial Rossington Main Novices’ Hurdle and better ground than his last outing at Haydock puts him right in the mix.

Review
CLAIM!CLAIM!
This offer is for new customers only and is available once per household. Max. FreeBet amount: £10 Minimum Deposit and wagering on sport to activate the Free Bet is: £10 Void/cancelled or cashed out bets do not count towards wagering to activate the free bet. Offer valid only to customers making a first deposit of £10 or more. Offer only applies to players who are residents of United Kingdom and Ireland. Full T&Cs Apply
3.

Review
CLAIM!CLAIM!
New Customers only. Bet £10* & Get £50* in Free Bets. Sign up, deposit between £5* and £10* to your account and bet365 will give you five times that value in Free Bets when you place qualifying bets to the same value and they are settled. Free Bets are paid as Bet Credits. Min odds/bet and payment method exclusions apply. Returns exclude Bet Credits stake. T&Cs, time limits & exclusions apply.
4.

Review
CLAIM!CLAIM!
18+, UK only. Deposit and place a minimum £10 cash bet at single or accumulated odds of 1/1 or greater and we will give you 1 x £5 in free bets plus an extra 3 x £5 Free Bets the following day. Applies to first cash bet only. Free bets credited as 4 x £5 bets to use on 3x Any sport & 1x Virtuals. Cashed Out, Void or Draw No Bet wagers do not qualify for this promotion. 1 x £5 Free Bets are credited upon qualifying first bet settlement, other free bets credited by midday the day after your first bet settles. 7-day free bet expiry. Available once per customer. This offer cannot be combined with any other promotion. Full T&C's apply.
5.