Win accumulator tips for this week’s Tuesday evening fixtures including picks from the UEFA Champions League and the best way to sign-up to our top rated bookmaker in the world – bet365.

Other offers: accumulator wins boosted, paid out if your team goes 2-0 up, live streaming.

For the final round of Champions League group matches, both Ajax and Inter Milan will be aiming to progress to the next stage of the competition when hosting important games. Their two fixtures feature in this Tuesday Accumulator alongside Championship action from Elland Road where in-form Leeds welcome unpredictable Hull. The final two selections involve out-of-form teams Chesterfield and Chippenham playing in the fifth and sixth tiers of English football.

This crunch game in Champions League Group H features leaders Ajax needing a point to seal a final top two position and they have been beaten only by Chelsea in their five previous matches. Although the Amsterdam outfit suffered their first domestic loss this term when beaten 2-0 by Willem at the weekend, expect a more determined approach to this game against a Valencia team which may need to win this contest. Having incurred a 3-0 home defeat by Ajax in an earlier game and lost three domestic matches on their travels this season, it may be a case of Valencia narrowly lose this game.

Despite losing just one game in Serie A action this season, league leaders Inter Milan have been more inconsistent in Champions League action with two away defeats incurred. A 3-1 victory at Slavia Prague last time offered the Italian team an opportunity to seal second position in Group F ahead of the visit of already-qualified Barcelona. The Catalan team have won their last four games in La Liga but have lost three competitive games on the road this season. With more to play for, Inter could claim a narrow victory and seal qualification for the knockout stage.

After winning each of their six Championship games since the beginning of November and conceding just twice, Leeds will now seek a sixth consecutive victory at Elland Road. United have netted at least twice in their last three home games and now face a Hull team which can be unpredictable. Jarrod Bowen can be a real threat in attack for the Tigers but much depends on which Hull outfit turns up in West Yorkshire on Tuesday evening. A defeat at Barnsley after winning at Fulham last month summarises their inconsistency but the current form of Leeds should ensure a home victory in this contest.

Relegation from the National League is becoming a real possibility for Chesterfield and a winless sequence of six matches with at least two goals conceded per game has not helped matters. The Spireites have also lost their last three home matches ahead of this visit of a Yeovil team which won 2-0 when hosting Halifax on Saturday despite the dismissal of a player after just nine minutes. Having lost just one competitive game on the road since the beginning of September, Yeovil could seal three points from this match.

A recent 3-1 FA Cup defeat at Blackpool was no disgrace for Maidstone and they resumed National League South action by winning 4-1 at Oxford City on Saturday. United are also unbeaten in league action at the Gallagher Stadium since mid-August ahead of this home fixture against a Chippenham team winless in league action from mid-October and which has lost five of six previous competitive matches. The visitors have conceded at least twice in those six matches and may suffer a fourth consecutive loss.

How to get the bet365 sign-up offer in your country

3 Start betting with our favourite bookmaker 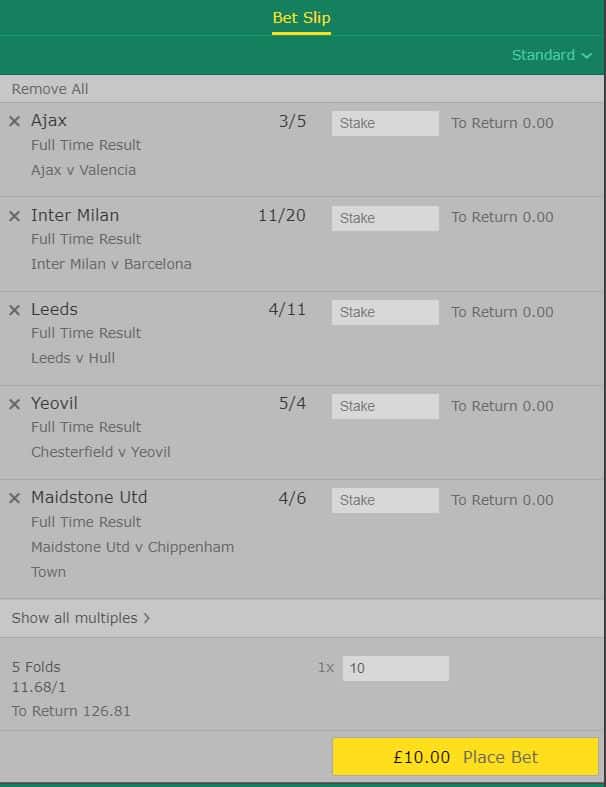