Carabao Cup Betting Tips for Tonight – One Bet from Each Match

The Carabao Cup is reaching the business end with 16 teams left in the competition – there are five matches taking place tonight and you can see our best League Cup betting tips from each game, adding them together makes a decent odds accumulator.

We’re going to use Ladbrokes’ odds for these tips, and if you open a new Ladbrokes account you’ll get four £10 bets for the price of one – as soon as you bet £10 you will get 3 free £10 bets credited to your new account.

The first bet comes from the all Premier League tie between two struggling sides. Everton lost on the road again against Brighton at the weekend and Watford could only manage a point at home to Bournemouth. The betting tip for this match is going to both teams to score. The Blues have only kept one clean sheet in their last four matches and have already conceded two at home against Wolves, Manchester City and Sheffield United this season.

Watford are struggling but scored away at Tottenham and Newcastle, as well as getting to this stage thanks to a 2-1 win against Championship side Swansea City.

Leicester put out another real statement of intent on Friday Night when they smashed nine past Southampton in another ruthless display. They’re third in the Premier League table and will have their eye on more silverware in this competition. This tie could be tricky against a Burton side who beat Bournemouth in the last round and have only lost once in their last seven at home (to Everton U21 in the EFL Trophy).

However, Leicester are ruthless and even if the likes of James Maddison and Jamie Vardy get a rest tonight, I am still predicting a win for Rodgers’ side. Leicester to win and over 2.5 goals looks a great bet here at odds of 4/5 with Ladbrokes.

After a 9-0 loss at the weekend, the last thing Southampton would have wanted is an away trip to Manchester City. Pep Guardiola will make changes to his side for this game but they’ll still beat the Saints comfortably. The Southampton manager is the current favourite to be the next Premier League manager to be sacked after the defeat on Friday night.

City won 3-0 at Preston in the last round and the likes of Mahrez, Phil Foden and Sergio Aguero could feature tonight after being rested for the weekend win over Aston Villa. It could be another long night for Southampton so we’re betting on Man City to score 3 or more goals tonight

Possibly the hardest League Cup match to predict tonight is Oxford vs Sunderland. The visitors have recently changed their manager but are still struggling to put a run of results together. Oxford are above them in the League One table following three straight victories. In fact, Oxford have won their last four home matches 3-0 now, and Sunderland have failed to score in their last three away from home.

At the prices, Oxford look a great bet to beat Sunderland tonight and on the win-draw-win coupon in the League Cup, they go in as our bet of the day.

The final League Cup fixture taking place tonight is the all League Two fixture and both sides will have an eye on the quarter finals of the competition. Crawley’s only win in their last seven matches was a 2-1 win against tonight’s opponents in the league a few weeks ago. Colchester beat Newport County 3-1 at the weekend and that was their first win since knocking Spurs out on penalties. The best bet for this game might be both teams to score, this has happened in five of Crawley’s last six home matches.

Open a new Ladbrokes account and you also get THREE free £10 bets added straight to your new account. 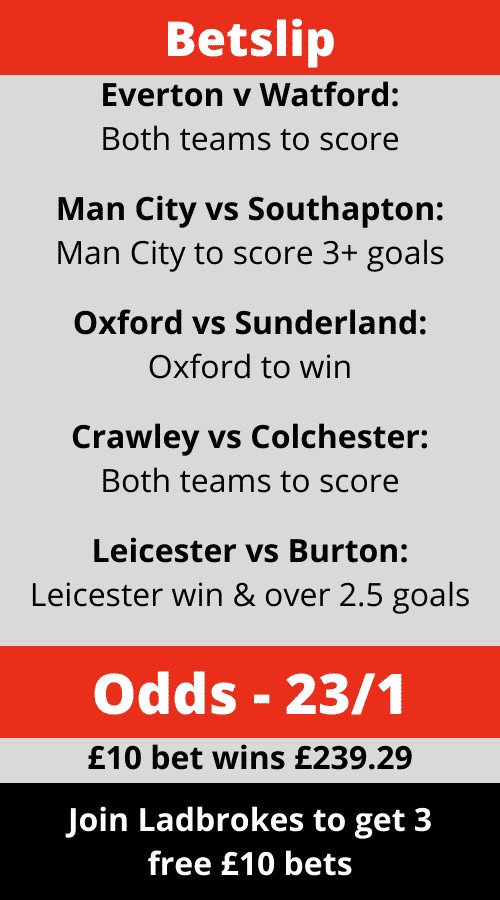