The FA Cup fourth round replays take place tonight and they’ve already caused a stir before they have even kicked off. Premier League players are supposed to be taking part in a winter break but the replays have been arranged right in the middle of their apparent time off.

There are five matches taking place tonight including Oxford United vs Newcastle live on TV, and we have picked out FA Cup predictions for each match below.

Use the Coral sign-up offer to get 3 free £10 bets to spend today.

These sides played out a 0-0 draw in the first tie and it was famous for being played at Birmingham’s stadium, despite Coventry being the home side. Now Coventry are the away team at the stadium they use for home matches.

Both of these teams are on good unbeaten runs, especially Coventry, who are now 10 unbeaten with six wins. Birmingham have not lost in their last six matches. They’ve won two of their last three at home including the impressive 2-1 weekend win against Nottingham Forest.

Coventry also won at the weekend, beating Bristol Rovers 2-1 away from home and they’re up to fifth in the League One table now.

This could be another close match tonight and it would be no surprise to see the game end in a draw – use the Coral sign-up bonus for 2020 to bet on the best odds 12/5 for this to go to extra time.

These two sides also played each other in the Championship on Friday night, and that also ended in a 1-1 draw after their FA Cup tie ended in the same result a week prior to that. It shows how evenly matches the two sides are and it means that both sides have now drawn three of their last four matches 1-1.

This brings into play the both teams to score market for tonight and it looks a good bet at odds of 7/10.

However, for the match prediction here, I’m betting on Cardiff to edge out their opponents, finally. The Bluebirds beat West Brom at home a couple of matches a go and even though the Baggies were in poor form then, it is still an impressive win against the league leaders. Reading have drawn their last two away and not won since beating Blackpool in their FA Cup third round replay. They made changes for that game and might do the same again tonight.

League Two Northampton did well to hold Championship side Cardiff City to a draw in the first tie, but Derby should be god enough to get the job done in tonight’s replay. The Rams have been strong at home all season and picked up a good win on Friday night, beating Stoke City 4-0 with a Wayne Rooney free-kick the pick of the goals.

Northampton are also on a god run and are fifth in the League Two table and unbeaten in nine matches in all competitions.

The prize is a big one for the winners of this game, a fifth-round tie at home against Manchester United. It could see Wayne Rooney play his former team and that’s what I’m predicting to happen in this one. Derby should be too good for Northampton at Pride Park, where they’ve only lost once since August. Northampton are on a great run too though so bet on Derby to win and BTTS at odds of 5/2 with Coral.

This match has already been wrapped in controversy as it takes place in Liverpool’s winter break. That has led Jurgen Klopp to say his first team players will not be available and he won’t attend the match. Even so, Liverpool’s youngsters still beat Everton in the third round and are fancied to do the same against tonight against lower league opposition.

Shrewsbury will thrive on their big night at Anfield but they’ve lost their last two matches since coming back to draw in the first toe of this game. It is probably worth taking a look at the team news before you bet on this game but in truth, Liverpool should win whichever side they put out. The odds for Liverpool to win this match are Evens at Coral.

The shock of the fourth round was Newcastle failing to beat Oxford United at St. James’ Park. Now the League One side will fancy their chances of completing the upset when Newcastle go to The Kassam Stadium tonight. The home side got back to winning ways on Saturday when they beat Blackpool and their promotion push continues.

For Newcastle, they’re near the bottom of the Premier League table for most stats this season and the fams are already starting to tire of Steve Bruce. They did pick up a miraculous point against Everton a couple of weeks ago but were only held 0-0 at home to Norwich at the weekend. That’s three draws in a row now and no goals scored in their last two.

Oxford will fancy this so I’m going for a bet on Oxford to win the match using the draw no bet market at odds of 15/8. This means that if the match ends in a draw, you get your stake refunded. 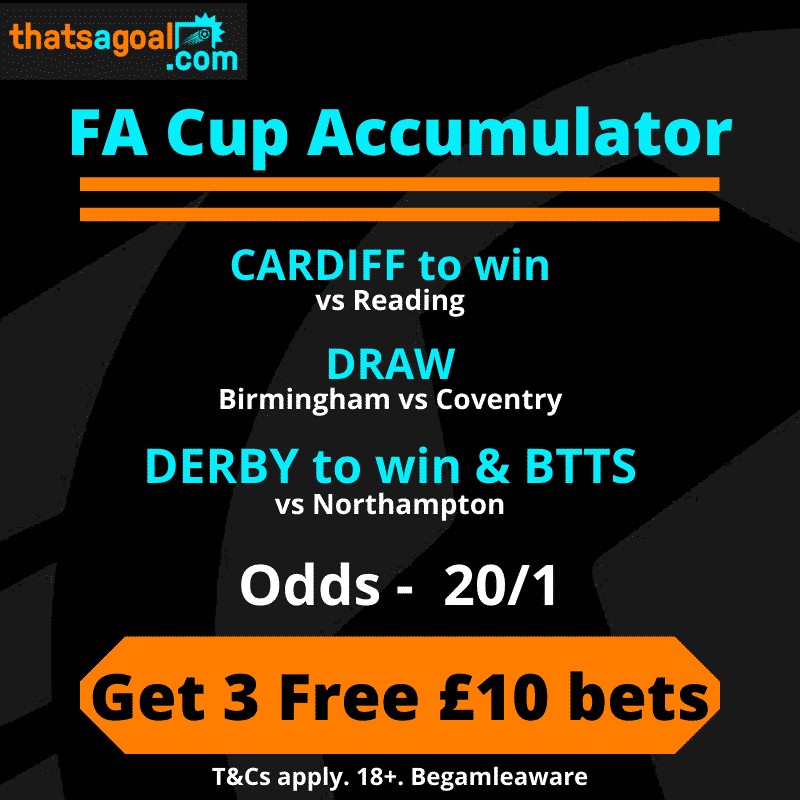