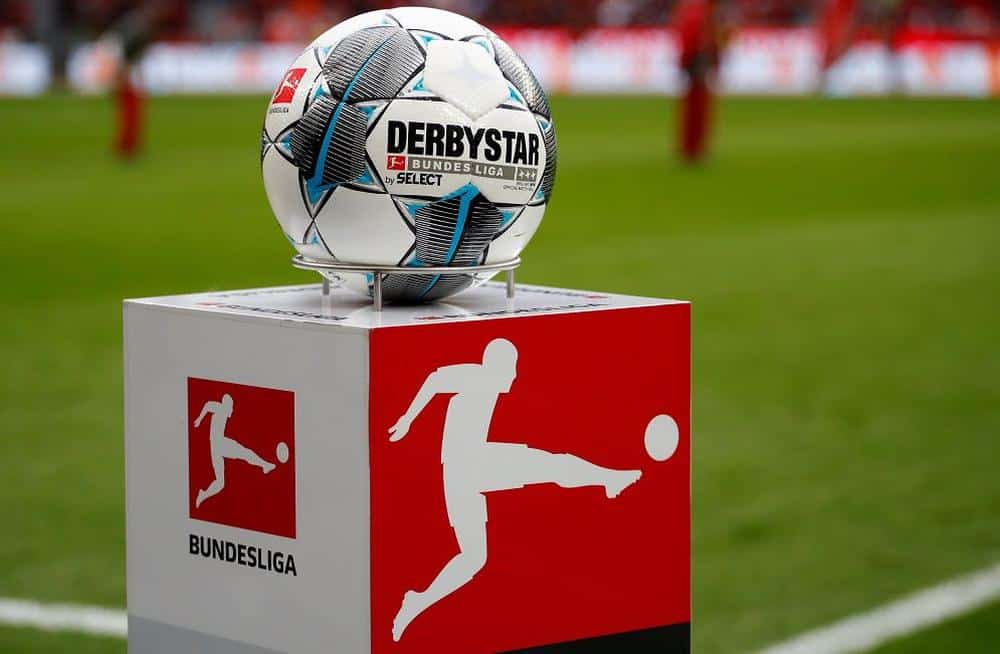 The Bundesliga Matchday 27 fixtures throw up some interesting fixtures and after just one home win in Matchday 26, we’re still learning if the empty stadiums have a negative effect on the home sides. However, we can still look at the stats and pick one bet from each of the Saturday 23rd May fixtures.

Following the Berlin derby on Friday night, there are five more fixtures taking place on Saturday including leaders Bayern Munich in action against Eintracht Frankfurt.

Andy has crunched the numbers and picked out one bet from each Saturday fixture that can be backed up by some stats.

First of all, lets take a look at the overall stats for the Bundesliga season so far. The league is always one of the most reliable for goals and that always brings into play BTTS and over 2.5 goals bets.

Saturday Matches with Highest Combined % of Over 2.5 goals:

The odds for over 2.5 goals in each of these matches is 4.7/1 with Willian Hill: Claim the William Hill £30 sign-up offer here.

The odds for both teams to score in these four matches is 4.65/1 at Sportingbet: get their free bet offer here.

Dortmund are getting well backed for this match but the stats might put you off a bet on them to win this game.

They have only won 50% of away matches under manager Lucien Farve and Wolfsburg were 2-1 winners at Augsburg last weekend.

The chance of BTTS looks high here, with the combined average at 66% (league average is 59%).

BTTS has happened in 63% of Wolfsburg’s home matches and 69% of Dortmund’s away.

Given the odds for BTTS are the same as for Dortmund to win, I’m much more confident adding both teams to score to this weekend’s bets.

Selection – BOTH TEAMS TO SCORE.

Unfortunately for punters, the bookies are well aware of this and have priced up BTTS at 1/2 and over 2.5 goals at 8/15.

One interesting stats here is that Leverkusen have scored in both halves in each of their last three matches.

Add to this that Monchengladbach haven’t kept a home clean sheet since their first home game of the season.

Leverkusen have also won 8 of their 13 away matches this season.

SELECTION – Leverkusen to score in both halves: 21/10 at Coral.

Bremen have conceded 14 goals from headers this season (the most in the league).

They’ve also conceded 44% of their goals from set-pieces this season.

3 or more goals have been scored in 85% of Bremen’s away matches this season.

The average goals in Bremen away games is 3.69 and in Freiburg home matches it’s 2.5.

Hoffenheim have kept a clean sheet in all 5 meetings with this weekend opponents.

Hoffenheim have the best away defence in the division, conceding just 12 in 12 matches.

However, they haven’t won in 6 Bundesliga games including last 3 away.

Hoffenheim average 2.5 cards per game away.

There have been four or more cards in each of Paderborn’s last 16 Bundesliga matches & in each of their last 10 at home.

The odds for all four of these selections to be correct are over 18/1 with Betfair. They are one of the few bookies offering odds on all these markets so you are going to need an account if you want to bet on it. 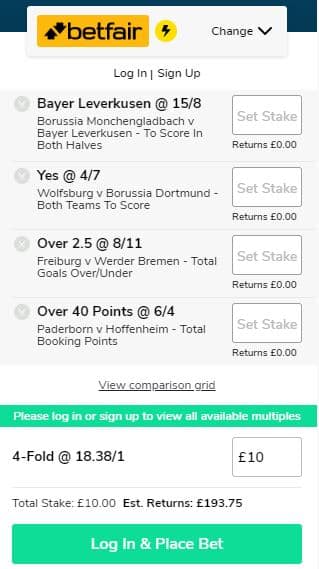 How to get the Betfair £100 in free bets offer: