Football accumulator tips for this weekend’s Saturday afternoon matches fixtures including the reasons for each pick and how to get two free £15 bets for the upcoming games.

If you join William Hill and bet £10 on this accumulator tip, you will get £180 if the bet wins – plus you also get two free £15 bets added to your account, win or lose. 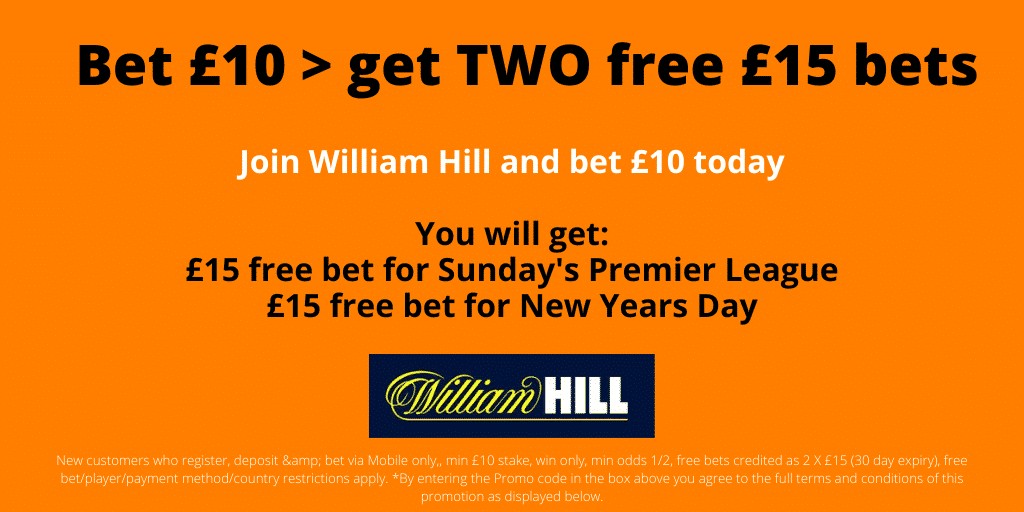 Reasons for this Weekend’s Acca Tips

Although there is a restricted program of Saturday afternoon football, Premier League action is included within this Accumulator with Watford aiming to extend signs of recent improvement when hosting Aston Villa. Meanwhile, in the National League, decent home teams Boreham Wood and Solihull host Barnet and Chesterfield respectively while home wins are tipped for Dunfermline and Inverness in the Scottish Championship. Odds of approximately 17/1 will be available for the successful outcome of these 3 o’clock kick-offs.

Amid a wretched season to date, the recent appointment of Nigel Pearson as manager seems to offer some home to Watford as they seek Premier League survival. Four points earned from their last two matches, including a 2-0 home win against Manchester United, is a good sign and they have lost just two games at Vicarage Road since the beginning of September. Visitors Aston Villa are also residing in the relegation zone and claimed three valuable points on Boxing Day when beating Norwich 1-0. However, the away form of Villa is a concern with a single point earned from five previous games on the road with at least two goals conceded per game. A home win is tipped.

Adverse weather prompted the postponement of the reverse fixture on Boxing Day, but Boreham Wood will enter this match having stayed unbeaten in National League action since a 2-0 home defeat by Fylde back in late October. The Wood have also won three consecutive league games on home turf including the defeats of Woking and Harrogate. Barnet will arrive at Meadow Park having won four successive matches but they had suffered three successive away defeats before sealing a recent comfortable win at Maidenhead. Both teams are in-form but Boreham Wood could use home advantage to secure maximum points.

When playing the reverse fixture on Boxing Day, Chesterfield were two goals ahead at one stage before Solihull claimed a point via a 2-2 draw with the equalising goal arriving in second-half stoppage time. The Moors now return to home soil where they have won six successive National League fixtures while the visiting Spireites have conceded at least twice in all but one league game since the beginning of November. That one game involved a 3-0 win at Torquay when playing against ten opponents for the second period. Solihull are a better defensive team and should seal all three points.

Despite losing at both Dundee and Inverness in their last two Scottish Championship matches, Dunfermline have stayed in the top half of the league table due to their impressive recent home form. The Pars have won five successive league matches at East End Park and now face an Alloa team which drew at this venue earlier in the campaign but which has claimed just one point from four previous away matches. A 1-0 win at Queen Of The South is the solitary league win on the road this term for the Wasps and they could leave Dunfermline without any points.

Four wins from five previous Scottish Championship matches including three consecutive home victories have allowed Inverness to currently occupy second position in the league table. Just two league losses have been incurred by the Highland outfit at the Caledonian Stadium this term and they now welcome Arbroath to the venue with the visitors winless in league action since beating Inverness in the reverse fixture back in early November. The Red Lichties have subsequently scored just twice and earned two points from five prior league fixtures and are facing another away defeat.