Zaha is in his second spell at Crystal Palace, after failing to make an impact when he signed for Manchester United 2013. Sir Alex Ferguson made that signing but retired shortly after and so Zaha never got his chance at Old Trafford. David Moyes didn’t give Zaha a chance and ultimately he went back to Palace, firstly on loan and then for a cut-price fee.

This season, Wilfried Zaha has been Crystal Palace’s best player once again, scoring 10 goals and having a hand in five more for the Eagles last season, and if he does leave Palace, he will be seen as irreplaceable by the Holmesdale faithful.

The Ivory Coast international is 27 years old now and during the summer he said he wanted to realise his dream of playing in the Champions League – but which club would sign Zaha? Is he good enough to play in the top four in the Premier League or would he be better off moving abroad?

Zaha Said he Wanted Champions League football in the summer

During the summer, Zaha hinted at a summer exit when he told the Daily Mail:

“I have to experience the Champions League. I just need the opportunity, that’s it. And I’ll do the rest.”

“I’m too ambitious. And not ambitious just to play for a top club, but to win things at club level and with the Ivory Coast.

“For me to be better, to achieve what I know I am capable of, I have to aim to play at the very highest level, to win trophies.

“I’m blessed to have come this far in my playing career. But I feel like there is so much more I have to offer.”

During the summer, Zaha had reportedly spoken to Crystal Palace and has said he wants to move on and he was strongly linked with a move to both Everton and Arsenal.

There are already rumors surrounding his next clubin January with Chelsea the favourites to sign Zaha, or could he move abroad with PSG currently the 5/1 second favourites. In the latest betting odds for Zaha’s next club, Leicester are third favourites at odds of 8/1, Tottenham are 14/1 and Manchester United are 16/1.

How much is Zaha worth?

This is going to be the big question and with three and a half years still left on his five year deal, the club won’t be in any hurry to sell their prized asset. The only option might be for Zaha to force a move away from Palace and then the club would have a decision to make – sell their star man or keep hold of him against his will.

It is thought that Crystal Palace wouldn’t accept anything less than £80m for Zaha in today’s market, with the likes of Richarlison’s transfer to Everton providing a good precedent regards transfer fee. They held out for £80m in the summer and that meant Zaha stayed at Selhurst Park.

Chelsea are the current favourites to sign Wilfried Zaha. PSG are second favourites and the likes of Arsenal (who he was strongly linked with in the summer) are out as big as 20/1 to be the next club for Zaha.

Where do you think Zaha will be next season? Let us know on Twitter @thatsagoal. 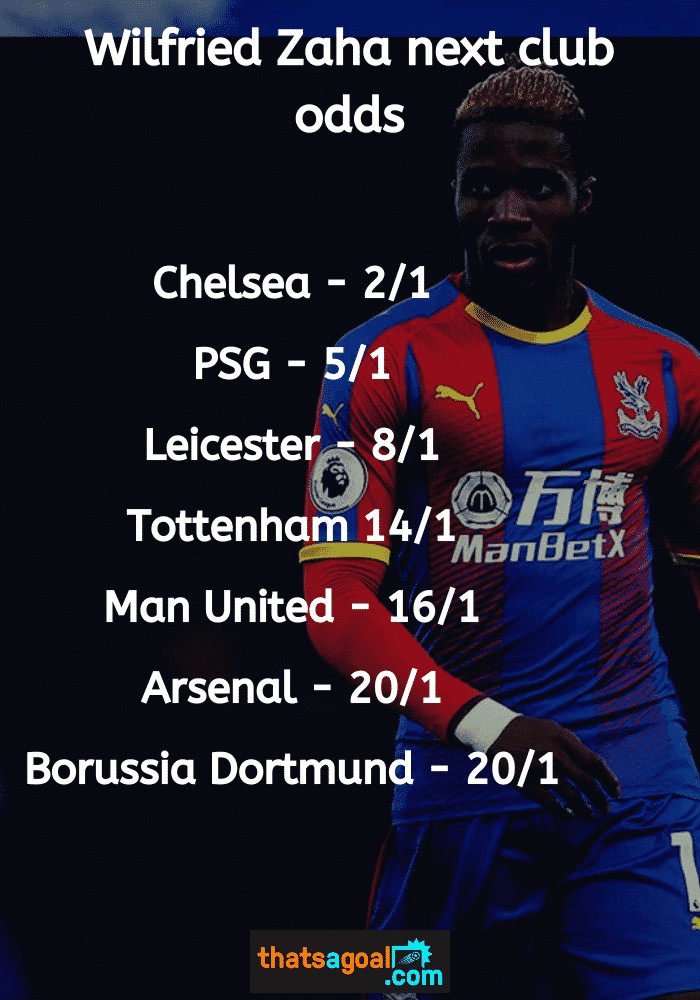 It's another quick turn around in the Premier League and for our Saturday accumulator tip,…

⚡£20 Risk Free for Liverpool v Man United (money back as a free bet, win or lose)⚡