Mainz vs RB Leipzig betting tips for the Bundesliga fixture taking place on Sunday 24th May behind closed doors. Leipzig slipped up last weekend and could only manage a point against Freiburg.

Read our Bundesliga predictions for this match below including a correct score prediction and a bet for a player to score. First let’s look at the betting odds for this clash from bet365.

In the betting odds for this match, RB Leipzig are the clear favourites to win at odds of 4/9 with bet365.

If you think both teams will score in this game you’ll get 8/13.

The hosts’ defensive record is the second-worst in the league, averaging over two goals against across their 26 league games this campaign. Meanwhile, RB Leipzig have kept four shutouts since the start of February, including a 0-0 draw with leaders Bayern Munich. Only Bayern can top Leipzig’s defensive record this season, conceding one fewer than the title-chasers.

The last time these two faced eachother in the league, RB Leipzig demolished Mainz in an incredible 8-0 win. Another win to nil looks on the cards this weekend and that’s where we’re kicking off our Sunday betting tips for this match.

Mainz had suffered just one defeat from their last five league games heading into lockdown, their best form of the season. They continued their steady form with a 2-2 draw against Koln last weekend, making it just one defeat in their last six. Despite the reasonable form, Mainz have struggled defensively, keeping just two clean sheets since late December.

RB Leipzig are seven points adrift from league leaders Bayern Munich with just eight games to play. Their draw last weekend may well have ended their title hopes and it will have to be a near-perfect run-in to stand a chance of catching Bayern.

Timo Werner was well on his way to his best goalscoring season before the enforced postponement. Only Robert Lewandowski has outscored Werner in Germany’s top flight so far this season. Werner has hit 21 for the campaign, averaging a goal every 102 minutes for RB Leipzig.

As already mentioned, Mainz have been poor defensively this season, conceding 55 goals in 26 matches, over 2 goals a game. Werner was unable to help his side to victory last weekend but with many top clubs such as Liverpool monitoring his performances closely, he looks a solid bet to net his 22nd league goal of the season.

If you fancy something a bit different for a bet on this match, consider one of these price boosts from Coral. These betting offers are available to new and existing customers and if you do need to sign-up for an account, you will get the Coral bet £10 get £30 sign-up offer added automatically to your account, giving you 3 free £10 bets straight away. 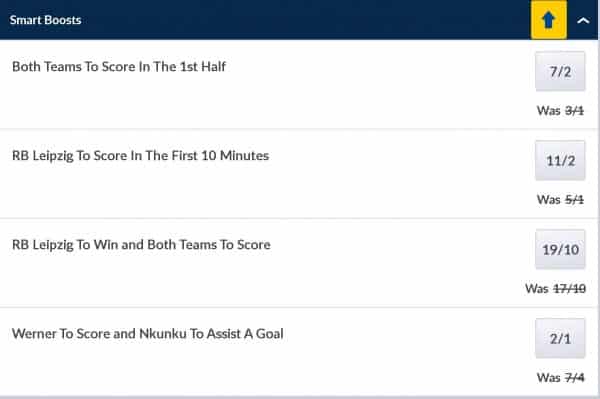