Bristol City vs Barnsley Prediction – Who will win?

Bristol City have won two of their last three league matches and are trying to finding some form after a poor spell in which they lost four in a row. Sandwiches in between those two wins though was a 4-0 loss at home to Brentford. Somehow, they are still just a point outside the play-off places though.

Barnsley are fighting for their place in the Championship and are now just a point from safety after losing just once in their last six league fixtures. Away from home, they lost 2-1 at Derby last time out, prior to that they drew at Swansea and beat Millwall at The New Den.

Now is probably not the time to beat against this Barnsley side, and I also couldn’t bet on Bristol City with too much confidence given that they lost 4-0 to Brentford in their last home match, taking their run at Ashton Gate to three losses and a win in their previous four.

With that in mind, a draw could be the best prediction for this Championship clash on Saturday and with that a 1-1 draw looks the most likely scoreline.

There has been a first half goal in Bristol City’s last six home matches.

Barnsley have scored in every one of the last nine meetings between these sides.

Four of the last six meetings have been a draw.

Both teams have scored in the last eight meetings between these two.

Backing up the stats, a draw with both teams scoring looks a good bet here.

Both teams to score is a very short price but one for your acca.

Weimann has scored nine goals this season already and is a good anytime scorer bet.

A 1-1 draw would be the score prediction.

Open a new Unibet account and bet £10 on this weekend’s Championship betting tips. Win or lose will get 3 free £10 bets added to your new account to spend on more football. 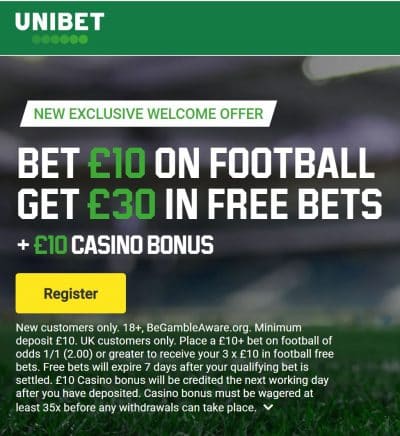 The Europa League returns with four last 16 ties. Manchester United are as good as…