Reading have failed to win in their last four Championship fixtures now but should be far enough away from the relegation places to get dragged in – can they beat Cardiff in this Friday night game? See the betting tips and predictions below to find out. 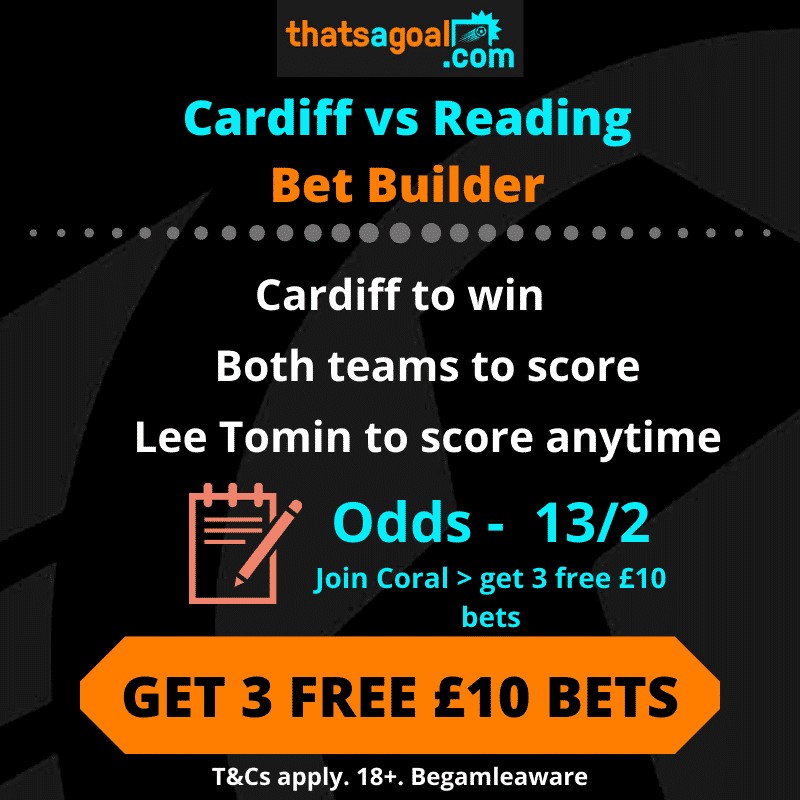 With Coral, you can add more than one selection to your bet on any match with their Bet Builder.

Simply pick the things you think will happen in the match and you’ll instantly get the odds for that bet.

You can bet on things such as anytime goalscorer, number of cards, number of shots on target for a player, players to be booked, BTTS, correct scores or which team will score first.

Cardiff are now six matches unbeaten in all competitions, but four of them have been draws.

They beat then leaders West Brom on Tuesday night.

Reading have only won one of their last seven matches, that was an FA Cup replay at Blackpool.

They’ve only won one of their last five Championship fixtures.

The South Wales outfit picked up a great win against West Brom at the weekend to keep their play-off hopes alive. They are now five points below seventh-placed Bristol City in the table. Cardiff have only lost once at home all season but they draw a lot of games – three of their previous four at home have been draws.

Reading haven’t won in their last four Championship matches now but they are 11 points clear of the relegation zone, so it is unlikely they’ll get dragged into a dogfight. They’re probably too far off the play-off places as well, so there is little left to play for in the league. However, these sides do have an FA Cup replay against each other next week after the recent 1-1 draw in the fourth round.

For my second Cardiff vs Reading betting tip, I’m predicting both teams to score. This happened in the recent FA Cup tie between the sides and can happen again on Friday night. Reading have scored in three of their last four away matches in the Championship including two at Fulham and one at Nottingham Forest. They seem to be able to hold their own against the big teams in this division.

Cardiff’s BTTS stats are not as strong but they have only failed to score three times at home this season and they’ve only kept three clean sheets in their last nine home league matches.

The Cardiff striker has scored in each of their last two matches now and he can continue that this week. He came off the bench to score against West Brom so he should start this match in a bid to continue his good recent form in-front of goal. At odds of 14/5, this looks a generous bet if you want to bet on the single the best odds are at Unibet.