Stoke have won their last to matches now as they try to climb away from the relegation places but this will be a tough game for them away at Derby. See our predictions and betting tips for the match below 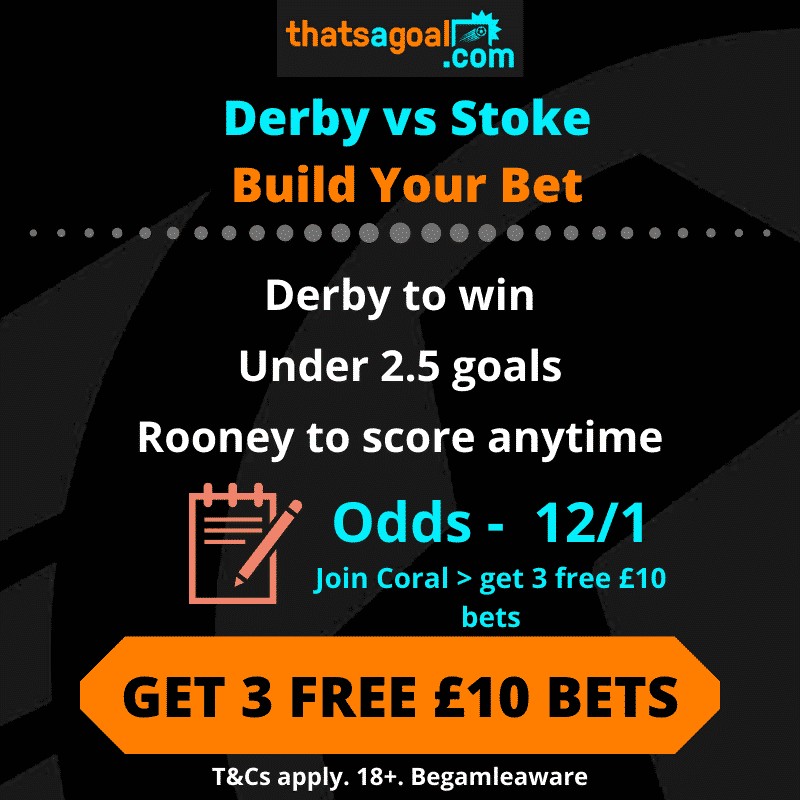 With Coral, you can add more than one selection to your bet on any match with their Bet Builder offer.

Simply pick the things you think will happen in the match and you’ll instantly get the odds for that bet.

You can bet on things such as first or anytime goalscorer, number of cards, total number of goals, BTTS, correct scores or which team will score first.

Derby suffered their first defeat in eight matches last time out, but have won their last three at home.

Wayne Rooney scored his first goal for the club on Tuesday night.

Stoke have won their last two and three of their last four league matches.

They are now five points above the relegation zone.

The 3-2 loss at Luton on Tuesday night was disappointing for Derby, but they can get straight back to winning ways back at Pride Park on Friday night. Derby had over 60% possession in that game and 15 shots, but their defense let them down. They have struggled on the road for most of the season and most of their points have been picked up at home

Stoke have put together a nice little run recently and got a shock 1-0 win at West Brom in their last away game, however, they seem to struggle to break teams down who are strong defensively and Derby have only conceded five in their last 10 home matches, so I’m predicting a narrow win for The Rams in this one.

I’m not expecting many goals in this game. Four of Stoke’s last five Championship matches have had fewer than three goals in them and although they have been involved in some high scoring matches in the last couple of months, they were against teams who are nowhere near as good defensively as Derby generally are.

Stoke got a 1-0 lead early against West Brom and then shut up shop, they’re likely to keep things tight here and try and get a goal to win it.

Derby don’t concede many at home though and their last match there was a 1-0 win over Hull. Eight of their last 10 home games have had under 2.5 goals in.

If this match is as tight as I am predicting it will be, Derby could need a hero and that man might be Wayne Rooney. Playing in a midfield role doesn’t stop him getting forward and he got Derby’s first goal against Luton at the weekend. He is also likely to be on free-kicks and penalties, which also boosts his chances of getting on the scoresheet. Rooney to score anytime is the last of the Derby vs Stoke betting tips for this Championship fixture on Friday 31st January.