The FA Cup always throws up some shocks and with so many matches taking place through Saturday, there are room for a few upsets in this season’s third round too. Matches kick-off at 12.31pm, 3.01pm and 5.31pm on Saturday 4th January 2020.

If you place a £10 bet on any FA Cup match with a new Coral account, you will get THREE free £10 bets added to your new account straight away – this means you’ll have four £10 bets for the price of one on the FA Cup third round – CLAIM YOUR £30 FREE BETS.

There are 20 FA Cup third round fixtures taking place this Saturday and with some Premier League teams really struggling for form and the likely changes that will be made to their starting line-ups following a busy Christmas period, there are a few chances of upsets on the card and I have picked out three of them below.

The first selection is going to be from Turf Moor and I fancy Peterborough to get the better of a Burnley side who have only scored one goal in their last three matches and just three goals in their last six. Sean Dyche’s side have only won one of their last five home matches now and that run includes defeats against Crystal Palace and Aston Villa. With a potential relegation battle looming, Dyche is likely to rest a few of his big players and Burnley were beaten by Lincoln City three years ago in this competition and only edged past Barnsley at this stage 12 months ago, needed a 92nd-minute penalty.

Peterborough have lost their last three league games now but will see this as a welcome distraction from their league form. They are currently in the play-off places in League One and will look to keep their good FA Cup form going following wins against Stevenage and Dover in Rounds 1 and 2. They beat Aston Villa away in 2018 so do have a little history in beating bigger sides.

Even though this one will technically be a giant-killing because Aston Villa are in the Premier League and Fulham are in the Championship, it won’t be a surprise to see the hosts win this one. Villa did get back to winning ways at the weekend but lost striker Wesley to a bad knee injury in the process. They are in the relegation zone and manager Dean Smith will want to preserve the likes of Jack Grealish for that battle, rather than a tilt at the FA Cup. Villa are already in the semi-finals of the League Cup which has already added extra matches to their schedule.

Fulham are in the play-off places in the Championship but did lose to Reading last time out. They have failed to get past the first round in the last two seasons of the FA Cup though, however they’ll fancy their chances against this Aston Villa side. Even though Fulham are favourites we’ll still tip this one up as a potential FA Cup third-round shock this weekend.

The third and final selection fo the FA Cup betting tips on third round Saturday is going to be a big odds pick. I’m going for Luton Town to pile the misery onto Bournemouth in this 5.31pm kick-off because the Cherries are in dreadful form in the main. They’ve lost eight of their last 10 matches now, winning just once, and after a busy Christmas period which ended in a 4-0 thrashing at West Ham, Eddie Howe must be starting to worry about his job. He will have to rest players for this match because Bournemouth are in the relegation zone.

Luton are bottom of the Championship and three points adrift, but they’ll hopefully see this as a chance to boost morale and get a result against a Premier League side. They concede too many goals but Bournemouth don’t score many so they’ll be hoping their strikers can score them out of trouble. They scored three against Fulham on Boxing Day and another performance like that should see them shock their Premier League opponents this weekend.

There are always shocks in the FA Cup third round and if you placed the three betting tips above in a treble, the odds would be a massive 100/1 at Coral. This means a £10 bet would win you £1010 and remember, if you sign-up you get the Coral £30 in free bets sign-up offer too. Follow the steps below to get the free bets:

3 You INSTANTLY get three free £10 bets for more bets 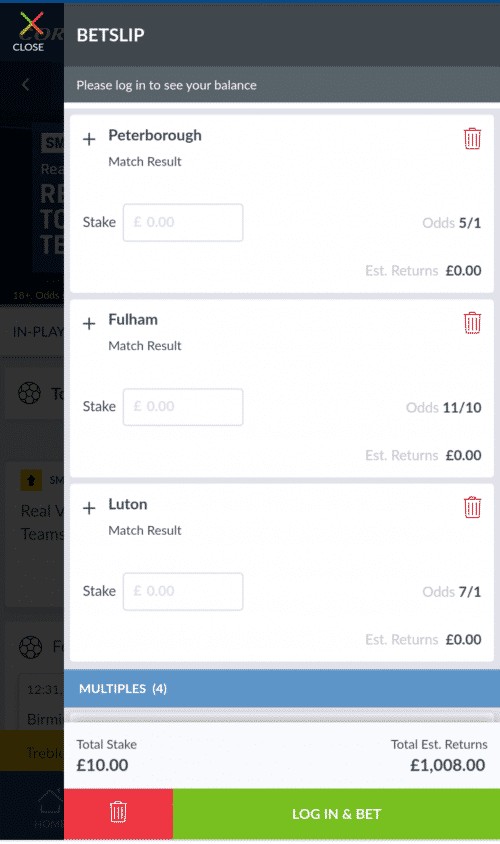