League One accumulator tips for this weekend’s selection of Saturday afternoon 3pm fixtures including the reasons for each prediction and the best bookmakers to use on the bet. We’ve picked out three bets which will hopefully boost our betting balance this weekend.

We use William Hill for our League One best betting tips because of their bet £10 get 2 x £15 free bets sign-up offer.

This means if you register and bet £10 on Saturday’s football, you’ll get two free £15 bets added to your new account – CLAIM YOUR FREE BETS HERE. 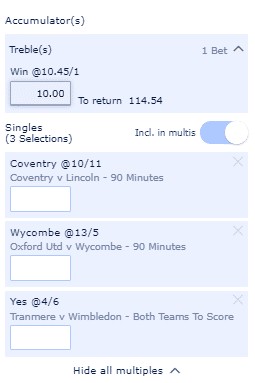 The move to St.Andrews clearly hasn’t affect Coventry’s home form. The Sky Blues are one of the best home sides in the division and they’re defensive record in the West Midlands is very impressive. They’ve conceded just eight goals so far and although Mark Robins has been criticised for being a little slow with his subs, they are always well-organised and have just enough flair in the final third. They’ve won seven of their ten fixtures here and Tranmere are the only side to beat them so far (a hugely undeserved victory). Lincoln have started to improve and it looks like the Imps could enjoy a profitable second half of the campaign under Michael Appleton. They’ve scored just ten times on the road so far and made very hard work of their 1-0 victory over ten-man Tranmere last weekend. They aren’t far away and a few January additions should certainly help them climb the table. For now, their lack of firepower might hold them back and Coventry could be difficult to beat on Saturday.

Wycombe continue to lead the way and the Chairboys remain fairly underrated by the bookmakers. Gareth Ainsworth is doing a superb job and he will be hoping to take advantage of an injury-hit Oxford side, who also had midweek cup commitments. The U’s are missing Ben Woodburn still and although they performed admirably against Manchester City, they could find it tricky to break down a very well-organised Wycombe side. MK Dons came with a gameplan last weekend and restricted the visitors throughout the contest. Ainsworth could have something similar in mind here. Wycombe have conceded just four goals on their road and their games outside of Buckinghamshire are fairly tight. Oxford are one of the highest scoring sides in the division, although they’ve drawn blanks in each of their last two League One games.

Tranmere vs AFC Wimbledon – Both Teams to Score? Yes

AFC Wimbledon are one of the leakiest sides in the division and have conceded two goals a game on average away from home. However, the West Londoners have Marcus Forss with the striker in superb form since arriving on loan. There has been talk of him returning to Brentford at some points, but for now, he’s remaining with Glyn Hodges’ side and is always a threat. Tranmere’s goal total is skewed by their early season rout of Bolton and they’ve struggled for goals in recent weeks. However, they’re usually good for a goal at home. Only defensive minded Shrewsbury and Wycombe have kept them off the scoresheet so far whilst they’ve kept just a single clean sheet at Prenton Park. They are 1-1 specialists and we could see a similar score-line on Saturday.

If you open a new William Hill account and bet £10 on our League One betting tips this week, you will get 2 x £15 free bets to use across the rest of the weekend. This is in addition to any winnings you get if your bet is a winner. Join William Hill using the steps below:

Tottenham vs Liverpool predictions and betting tips for tonight's Premier League fixture. Both sides are…