Home Predictions Liverpool vs Red Bull Salzburg Prediction: Liverpool to put their Napoli disappointed behind them

Liverpool vs Red Bull Salzburg Prediction: Liverpool to put their Napoli disappointed behind them

Liverpool vs Red Bull Salzburg prediction and betting tips for 02/10/19 Champions League fixture at 8:00pm. Liverpool’s 100% record in the league continues but can they bring that form to the European stage?

These two sides had very contrasting opening matches in the Champions League. Liverpool suffered a disappointing 2-0 defeat in Naples whilst Red Bull Salzburg put six past Genk. Who will come out on top at Anfield tonight? See our prediction below.

Liverpool continued their impressive league form with a 1-0 win over Sheffield United. The Reds can consider themselves very fortunate to come away with a win from that game but nevertheless showed that they can win despite a subpar performance.

Red Bull Salzburg are also top of their league, leading the Austrian league comfortably after nine games. Eight wins and one draw highlights the Austrian side’s dominance domestically but can they cut it against the very best teams in Europe?

Plenty of goals to come

It’s no surprise that Liverpool have scored bucketloads of goals in the league once again. However, The Reds haven’t hit their stride defensively and look vulnerable. Salzburg have scored almost twice as many as any side in their league and won 6-2 against Genk on UEFA Champions League match day 1. This match looks set to be high scoring with plenty of goals the first of tonight’s predictions. Over 4.5 goals is priced at 15/8 with Bet Victor for this Liverpool vs Red Bull Salzburg clash.

James Milner to hit the back of the net

Liverpool have no shortage of likely scorers. Mo Salah and Sadio Mané finished as joint top-scorers in the league last season and Roberto Firmino has been in imperious form. However, we’re backing James Milner to score in this one if he is in Jurgen Klopp’s starting line-up tonight. The Englishman has shown his class in Europe on more than one occasion and will likely be on penalty duties should he be on the field for one.

What are the odds for James Milner to score tonight? 7/2 with Bet Victor.

It’s no secret that Liverpool can run riot against just about any team in Europe. Last season Liverpool beat Bayern 3-1, Porto 4-1 and Barcelona 4-0 in knockout stages of the Champions League. Do not be surprised to see them hammer Salzburg in front of The Kop. A 5-1 win is priced at 25/1 with Bet Victor and that completes our Liverpool vs Red Bull Salzburg betting tips for tonight’s game. It would be a surprise to see anything other than an easy win for the Premier League leaders tonight.

Get 30/1 for Liverpool to beat Red Bull Salzburg 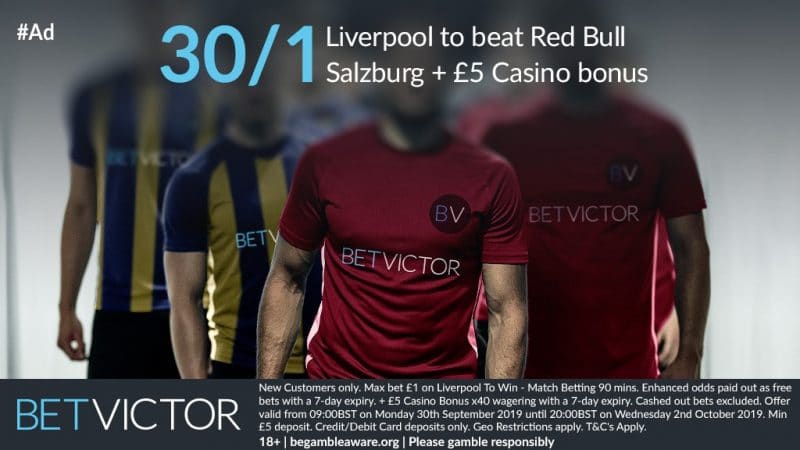 Read More: Get the rest of tonight’s Champions League betting tips including for Chelsea’s match in France.