Manchester United vs Partizan Belgrade prediction and betting tips for 7/11/2019 Europa League fixture at 8:00 pm. Manchester United’s European campaign hasn’t been stellar, yet they find themselves undefeated and top of Group L.

Two narrow wins and a draw is enough to put Manchester United in pole position for progression to next round. Partizan Belgrade are still in contention, just one point behind second placed AZ Alkmaar. See our Europa League tips and predictions below.

Over Under Goals Tip

It took until the 73rd minute for United teenager, Mason Greenwood, to break the deadlock against Astana at Old Trafford. A 0-0 draw with AZ Alkmaar away from home followed, before another 1-0 win, this time over Partizan.

The Serbian side secured a creditable point against AZ in their opening game in a 2-2 draw. An away win over Astana was much needed if they harbour hopes of progression. A penalty is all that separated Partizan and Manchester United last time out.

Another low scoring game for United

Just two goal have been scored in Manchester United’s three games. The Red Devils are yet to concede in Europe but have score just twice. Home advantage did little to buoy the attack against Astana but the return of Anthony Martial should give United another option. Under 1.5 goals is priced at 11/5.

Three clean sheets from three is an impressive statistic for United in Europe. Solskjaer’s side have kept things reasonably tight in the league too and face a Partizan side who failed to score against United last time around. Under clean sheet looks likely for The Red Devils. Manchester United to win to nil is priced at 20/21.

This isn’t a Manchester United side that has shown they can run riot. They have scored more than one goal in a game just once since August (against Norwich). They should just about find a way past Partizan with the superior attacking options at their disposal.

Join Coral and bet £10 on any bet tonight – you will INSTANTLY get 3 free £10 bets added to your account – CLAIM HERE. 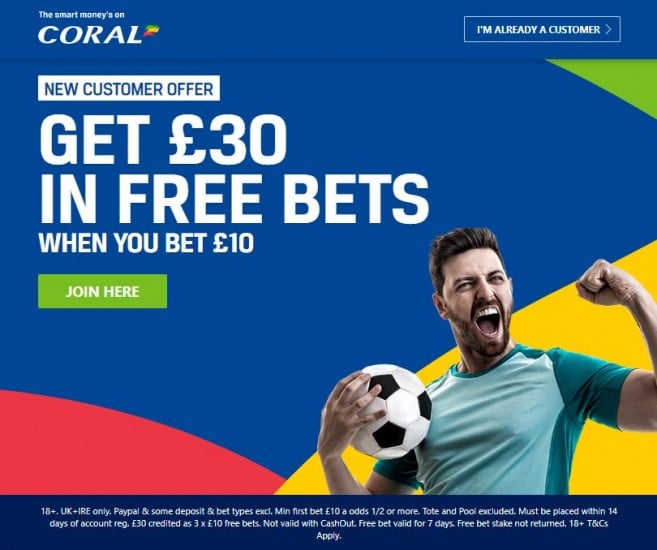 Read More: See what the pundits are predicting in this weekend’s football or head to our accumulator tips for a Europa League bet.