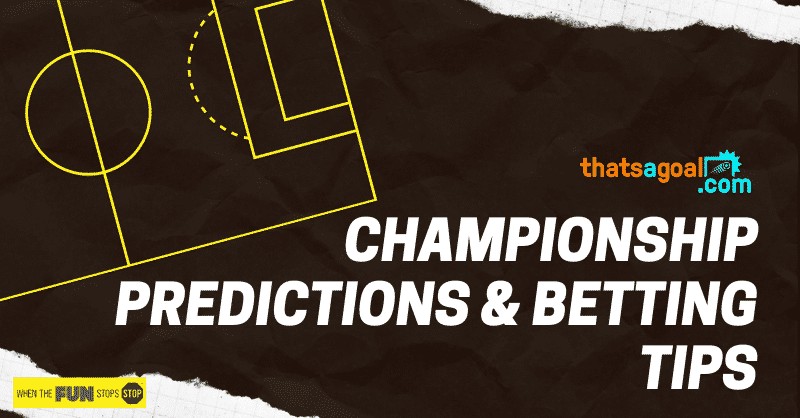 This weekend’s Championship betting tips come from the 3pm kick-offs on Saturday 5th December and they including Norwich vs Sheffield Wednesday and Millwall vs Derby.

League leaders Norwich had their unbeaten run halted last weekend and then they suffered a shock loss to Luton Town in midweek. That match features alongside Blackburn’s game with Brentford where one of the in-form players in the Championship is predicted to score again.

Millwall and Derby to battle at The New Den, Birmingham travel to Bristol City and Reading host Nottingham Forest in the three other matches for this weekend’s Championship tips.

Norwich’s fantastic 10 game unbeaten run finally came to an end when they were defeated 3-1 away from home by Luton. Tony Pulis continued his job of steadying the ship as new manager of Sheffield Wednesday with a 1-1 home draw to Reading, that draw was Sheffield Wednesday’s 4th out of their last 5 games. Norwich were without 10 first-team players for their trip to Luton, and you get the feeling their enormous injury list will start having a detrimental effect on the teams performance, expect a very stubborn Tony Pulis side to get a positive result from their trip to Carrow Road on Saturday.

Bristol City are in terrific form of late with 4 wins out of their last 6 games which has led them to 3rd in the league and they come into this game off a tenacious 2-1 away win at QPR in midweek. They welcome struggling Birmingham City to Ashton Gate on Saturday. Aitor Karanka will desperately be working on the training ground with his players, his side are winless in 6 straight games; drawing 3 and losing 3, they were defeated by Barnsley 2-1 at home last time out in midweek. Bristol City tend to keep it pretty tight at home, 5 out of their last 6 games played at Ashton Gate have seen under 2.5 goals and expect the same again here in a narrow win for Dean Holden’s men.

The side with the most draws in the league Millwall welcome struggling Derby to the Den on Saturday and both sides are desperately in need of a win. Millwall are winless in 7 straight Championship games; drawing 5 and losing 2, whilst Derby are winless in 11 straight games; losing 6 and drawing 5. Confidence will no doubt be a real issue in this game, and with pressure on both clubs, this is a game neither side can afford to lose so except stalemate in a low-scoring affair.

After a poor run of form on the underside of the international break, Veljko Paunović will be pleased with how his side have bounced back after the international break, they have lost once, drawn twice and picked up a victory. Chris Hughton’s honeymoon period at Nottingham Forest is over, after a good start his side are now winless in 4 straight Championship games; losing 3 on the bounce and last time out registering a goalless draw at home to Watford. Reading are slowly picking up the form which saw them rise to the top of the table and expect them to notch up a few goals against a struggling Forest side.

Open a new FanTeam account and get a risk free €20 to spend on our Championship accumulator tip this week.

Fancy a risk free €20 free bet? Read our FanTeam review of their sportsbook and claim your offer which includes: