Sheffield United vs Arsenal Prediction and Betting Tips: Shock Win for the Blades?

Sheffield United vs Arsenal prediction and betting tips for the 21/10/19 Premier League fixture at 8:00 pm. Arsenal are third and undefeated in five league games but they’re far from their best.

Arsenal may be third, but they’ve conceded more goals than Brighton, scored the same as Aston Villa and failed to win three of the their last five matches. Sheffield United would have counted themselves unlucky to lose against Liverpool following a goalkeeping error but they have already beaten Everton and Crystal Palace this season. See our prediction and betting tips for tonight’s Monday Night Football below.

Bet £10 on this match > get a free £5 bet for ALL Tuesday’s Champions League matches – CLAIM WHEN YOU JOIN PADDY POWER.

Sheffield United can be pleased with the start they’ve made to the campaign. The Blades are 15th after eight games and have conceded just seven goals – only Liverpool have conceded fewer. Their last four games have averaged just one goal a game. They were beaten 1-0 by Liverpool at Bramall Lane a few weeks ago but played well and deserved a result. It was a shame that goalkeeper Dean Henderson made the vital error to let Wijnaldum’s shot squirm into the net.

Their last result before the international break was a 0-0 draw at struggling Watford and it seems that goalscoring will be the big problem for Chris Wilder’s side this season.

Arsenal come into this game having won five and drawn one of their last six matches in all competitions, but they have a problem away from home. So far this season they’ve already lost at Liverpool and only managed draws against both Watford and Manchester United. The Gunners have relied heavily on Aubameyang this season but can be thankful that Lacazette is set to make his return from injury. Two narrow wins from the last five isn’t the form they need to maintain a top-four challenge and with the likes of Leicester and Chelsea winning again this weekend, Arsenal need to start picking up wins away from home before they get cut adrift.

The odds for Sheffield United v Arsenal to end in a draw are 13/5 with Paddy Power.

In the latest goalscorer betting odds, Pierre-Emerick Aubameyang is the 10/3 favourite to score the first goal and he’s Evens to score anytime.

The returning Alexandre Lacazette is 13/10 to score anytime in the match tonight and he’s 4/1 to score the first goal (check the starting line-ups before betting on Lacazette).

For Sheffield United, big money summer signing Oliver McBurnie is 13/2 with Paddy Power to get the first goal and he could be a good bet against a poor Arsenal defence.

Sheffield United have scored and conceded just seven goals this season. Their games average under 2 goals a game and we expect that to continue here. The Blades have shown they can keep the best sides at bay, limiting Liverpool to one, rather fortunate, goal. They have managed to restrict some good sides to very few chances including Everton and Southampton. Even Liverpool struggles to create clear cut chances in their recent win.

Arsenal’s away matches have been more open but an under 2.5 goals bet would have been a winner in the match at Old Trafford against Manchester United and also in their opening day of the season 1-0 victory at Newcastle.

The first of tonight’s Sheffield United vs Arsenal predictions is for there to be under 2.5 goals in the match and the odds for this are 11/10 at Paddy Power.

The Gunners have shown their defensive vulnerabilities on a few occasions this season. They surrendered a 2-0 lead to Watford, went behind against Aston Villa and failed to beat an out of sorts Manchester United in a dire 1-1 draw. With a raucous Bramall Lane behind Chris Wilder’s side, I’m predicting that Sheffield United can get a result in tonight’s fixture and the best way to play this in the betting odds would be to bet on Sheffield United/Draw double chance. This means if Sheffield United win, or the match ends in a draw, then your bet will be a winning one. The odds are 5/6 at Paddy Power and looks a decent prediction for a bet which would have won in Arsenal’s last three away fixtures.

Sheffield United were ever so close to pulling off a shock result against Liverpool in their last game at Bramall Lane. They defended well and held The Reds for long periods of the game and had chances to score. Arsenal possess obvious attacking threat but Sheffield United may just be able to exploit their leaky defensive with incisive counter-attacking. If the Sheffield United attacking players can put one of the chances away tonight, we could see a shock in South Yorkshire.  Sheffield United to win 1-0 is priced at 12/1 with Paddy Power.

Bet £10 > get EIGHT free £5 bets for the Champions League

Bet £10 on our Sheffield United v Arsenal prediction for tonight and win or lose you get EIGHT free £5 bets – one for each Champions League fixture tomorow night.

3 Get EIGHT free £5 bets for tomorrow 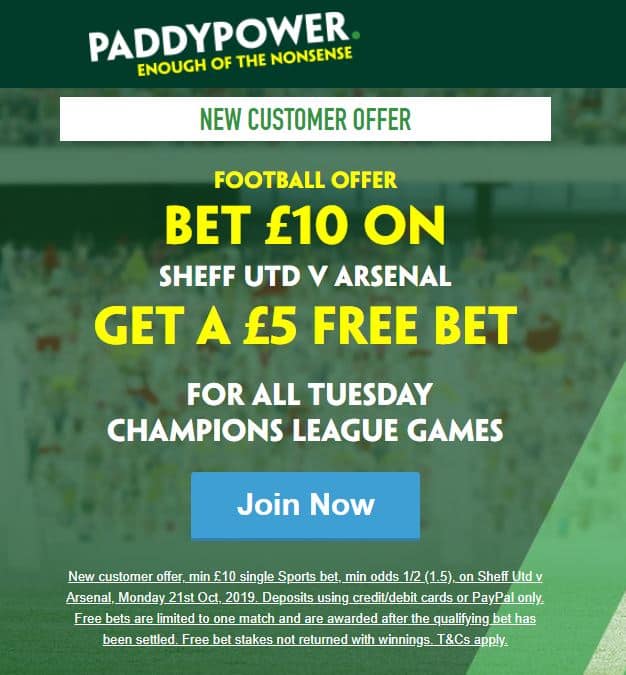 📽️ Chris Wilder says his players will be bullish in their approach, whilst he also praised the support his team have received from the Bramall Lane terraces so far this term.#SUFC 🔴

At last, at long last…