Wolves vs Leicester betting tips and predictions for the 8:00pm kick-off in the Premier League on Friday 14th February including a correct score prediction and anytime goalscorer tip for the clash.

Leicester have the chance to go second with a win at Molineux on Friday after Manchester City’s match with West Ham was postponed last weekend. For Wolves, they’ll be looking to climb to sixth and close the gap on the top four. The race for Europe is hotting up with Everton hot on the heels of Sheffield United and Spurs, and Man United and Wolves just in behing.

See our predictions for this Friday Night Premier League fixture below. 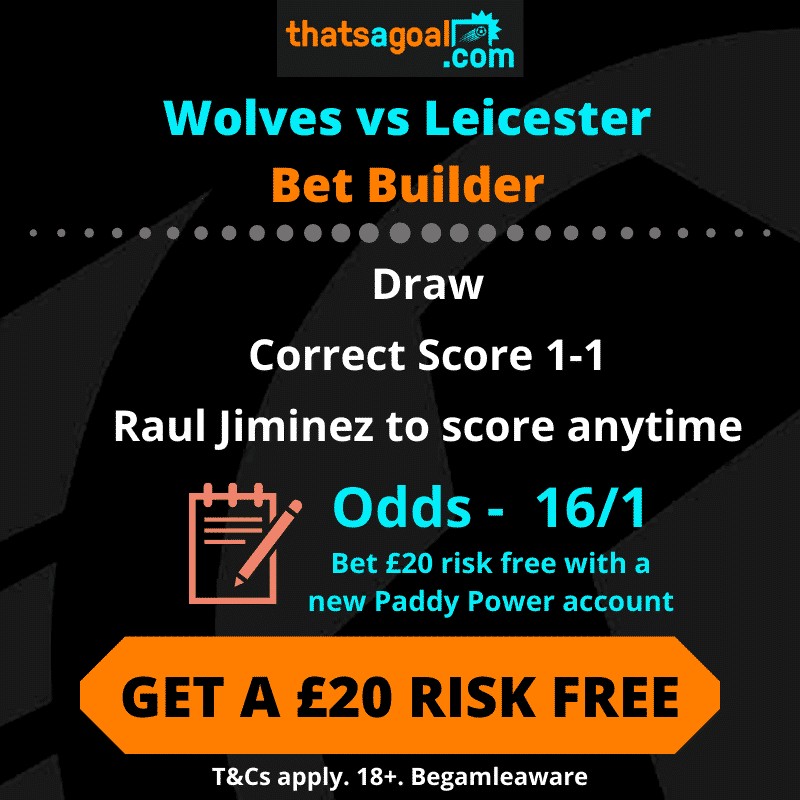 Wolves have drawn 11 of their 25 league games so far this season – only Arsenal have drawn more.

Eight of their 11 draws have ended with a 1-1 scoreline.

The last time Wolves and Leicester met, they drew 0-0 in the opening weekend of the season.

Jamie Vardy’s 17 goals is the highest in the Premier League, Raul Jimenez is joint eight with 11.

Who will win Wolves vs Leicester? Draw @ 9/4

These two sides couldn’t be separated in their reverse fixture. There’s no questions that Leicester have had the more successful campaign since then but the Foxes have faltered of late. Leicester have lost four of their last eight league games, conceding at least once in seven of those. It’s a far cry from their early season form which saw Brendan Rodgers’ side record eight consecutive victories, amassing five clean sheets in the process.

Wolves too had a fruitful period, going eleven games without defeat. Since then, it’s four defeats in nine. Both Leicester and Wolves drew their last league game, picking up a single point against Chelsea and Manchester United respectively. There’s not much between these two.

Leicester’s previously resilient defence no longer look capable of a shutout. They have conceded in nine of their last ten league games, their only shut out coming against goal-shy Newcastle. What’s more Wolves have found the net in all but three league games this season.

Wolves’ defensive returns have left much to be desired though. They have kept just two clean sheets since the start of December. Their only two home clean sheets have come against two of the current bottom three.

Bet on Raul Jiminez for an anytime goalscorer @ 17/10

The Mexican international has notched 11 league goals so far this season and is by far Wolves’ biggest goal threat. Jimenez has three goals in his last three Premier League games and has the advantage of penalty duties to supplement his threat from open play.

Adama Traore has assisted the forward on multiple occasions this season and should be fit to play a part in the encounter, further boosting Jimenez’ goalscoring prospects. Leicester’s poor defensive record of late suggests that the Foxes will be unable to prevent another breach of their defence away at Wolves.

How to get a £20 risk-free sign-up offer at Paddy Power:

3 If you win get paid in cash

If you are a horse racing fan you will be starting to get excited about Cheltenham, and we’re already preparing our betting tips for the 2020 Cheltenham Festival and there is also a NRNB Cheltenham offer already live that you should use.