Home Premier League Fantasy Football Gameweek 7 Captains Pick – Who should be your captain this weekend?

Fantasy Football Gameweek 7 Captains Pick – Who should be your captain this weekend?

Pep Guardiola’s rotation of popular captain option, Raheem Sterling, opened the door for some big vice-captain scored from the likes of Kevin de Bruyne and Bernardo Silva as Manchester City strolled to an 8-0 win last weekend.

With Raheem Sterling playing against Preston in the Carabao Cup this week (and scoring), Pep has once again given Sterling owners a headache as to whether the England winger will start this weekend’s match against Everton at Goodison Park. It is likely to be a tricky match so it is hard to see Sterling getting another rest on Saturday, however it might be best to look elsewhere for your gameweek 7 captain.

The Egyptian makes a return to our list this week with a trip to Brammall Lane in store for Liverpool. Salah registered five points last week against Chelsea, justifying our decision to overlook him whilst still adding to his impressive points tally. The FPL midfielder has scored or assisted in all but one game and sits third for overall points, just five off top spot. However, Sheffield United have conceded just one goal a game on average and could frustrate Liverpool.

Since his return from suspension, Son-Heung Min has averaged seven points a game. He looks to have hit form, scoring twice and assisting twice in his last three games, with an additional assist ruled out by VAR last weekend. Tottenham host The Saints, who conceded three times to Bournemouth last weekend. Southampton have kept two consecutive clean sheets on the road against Sheffield United and Brighton but their 3-0 away defeat to Burnley shows they are far from impenetrable.

Our token Manchester City pick for this week is Sergio Aguero. The Argentine continued his incredible scoring run, taking him to eight for the season as the outright leader in the scoring charts. Aguero has now scored in six consecutive matches, with two assists to boot and leads the FPL points chart with 55. He has currently averaged over 9 points a game and faces an Everton side who have conceded nine goals in the last four games against Aston Villa (2), Wolves (2), Bournemouth (3) and Sheffield United (2).

There are several standouts picks this week with Sadio Mané, Raheem Sterling and Kevin de Bruyne not making the list. We’re opting for the current top point scorer, Sergio Aguero, for his consistent returns and appealing fixture.

With no Sergio Aguero or Mo Salah in the team, we are looking at a toss up between Raheem Sterling, Saido Mane, Tammy Abraham and Jamie Vardy for this week’s captain. Both Abraham and Vardy have got easy looking home matches and should be amongst the points, with both Sterling and Mane playing away from home. The uncertainty around the Man City starting 11 and the knock to Mane means one of the fowards are likely to get the nod this weekend. 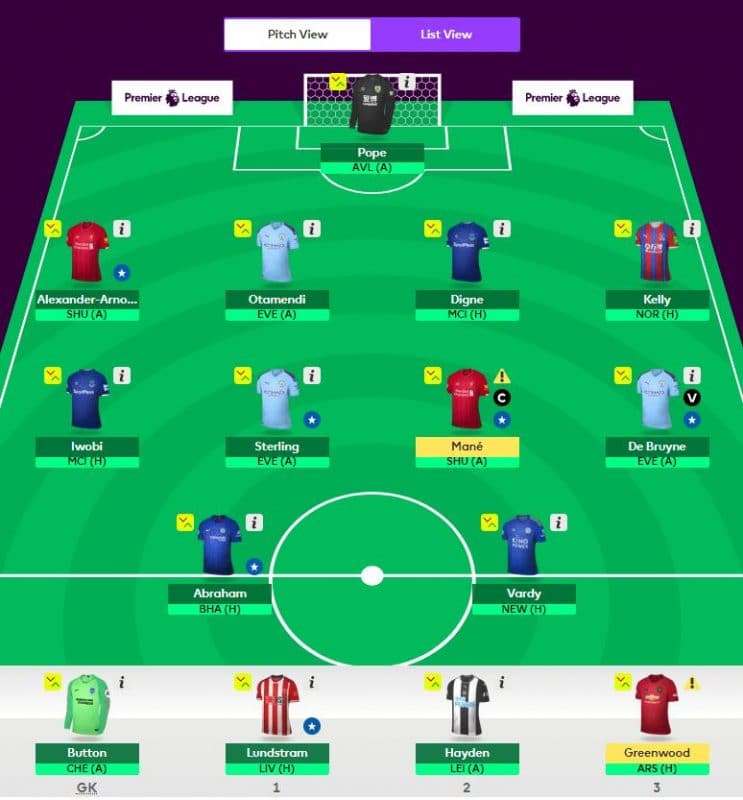 Read More: See our Fanatsy Football predictions for this gameweek including some recommended transfers you should make.